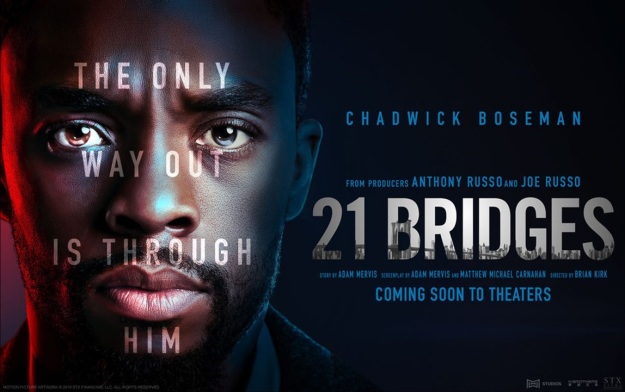 Look, the holiday season is a busy time and this one slipped through the cracks, alright?  Besides, even if this movie hasn’t been in theaters since Disney Plus came out, it still has SOME value… at least once the blu ray comes out… right?  Eh, whatever.  I’ve got a To Do list for the end of the year, and we’re putting a little check next to this one right the heck now.  Is this cop thriller a fun little distraction from the rest of the big movies that came out in the last two months, or is there a reason I kept pushing this one to the back burner until it was well past the point of being relevant?  Let’s find out!!

Super Detective Andre Davis (Chadwick Boseman) is called to the scene of a gruesome crime.  A bunch of cops were found dead at the scene of a drug robbery and the two suspects have disappeared with a large amount of cocaine.  Said suspects are Michael and Ray (Stephan James and Taylor Kitsch) who we learn were not expecting THAT much coaine to be there, let alone any cops, and so they have to find a way to get out of town and probably even further than that as soon as possible with the drugs they took being their best bargaining chip in the seedy underbelly of organized crime in the city.  Andre however is hot on their heels along with his temporary partner Frankie (Sienna Miller) from Narcotics that seems to be particularly invested in this case along with Captain McKenna (JK Simmons) who was in charge of all the officers gunned down during this raid.  Andre’s big plan to catch the crooks is to shut down the island of Manhattan (which includes it’s TWENTY-ONE BRIDGES) to any traffic in or out and hopefully root out the two bad guys before they can escape without a trace, but as Ray and Michael work their way through dealers, contacts, and Swiss bank account dudes to try and secure safe passage, they may have come across some information that puts an even bigger target on their backs than the ones they already had.  Will Andre be able to find these two and uncover the mystery of wat exactly happened this night?  What secrets did Ray and Michael learn, and is it their ticket to freedom or their ultimate death sentence?  Most importantly, is this a role worthy of the king of Wakanda!?

END_OF_DOCUMENT_TOKEN_TO_BE_REPLACED

They BETTER not make another Back to the Future movie is all I’m saying.  Oh Hollywood.  Is there no pile of garbage you won’t slap a brand onto and sell it for matinee prices?  Do you even give a shit anymore, or am I just that naïve that I didn’t expect this to suck more than an industrial strength vacuum?  Another Terminator film is upon us dear readers and as hard as it is to believe, this is the worst one.  Now I haven’t seen Salivation since it was in theaters, but even THAT one managed to suck without pissing me off (at least as far as I recall).  This one though?  Oh you have NO IDEA what’s in store for you if you choose to spend your hard earned cash on this instead of more useful things like Taco Bell and lottery tickets.  If you HAVE seen it already, I’m sorry.  I’m so sorry.  Just remember that you’re not alone.  A lot of us witnessed this tragedy and we will all heal with time.  You know what might help though?  Sharing the pain with others.  Let’s get started.

Terminator Genisys (THAT’S NOT HOW YOU SPELL THAT!!!) is basically the Back to the Future 2 of the Terminator films only the quality is more on the level of Beastmaster 2.  The movie starts by retconning Salvation where we see an alternate version of the future and the events that led to Kyle Reese (Jai Courtney who may remember from LAST year’s astoundingly terrible action film I, Frankenstein) going back to 1984 to protect Sarah Connor (Emilia Clarke) as he did in the original.  When he goes back though, everything has changed from the first film.  Not only is there a T-1000 specifically hunting him, but Sarah Connor has already gone through the training she went through between Terminator 1 and 2, AND she’s also got a friendly Terminator that she calls Pops played by the lovable Austrian action star.  It turns out that in THIS version of events, a T-1000 went back in time and tried to kill her when she was a child.  It succeeded in killing her parents before getting destroyed by Arnie (I think) and she’s been living with him since then, training to become a warrior and the mother of the savior of humanity.  How any of this works in the timeline is one of the great mysteries of cinema along with the Three Men and a Baby Ghost and the Munchkin Suicide. 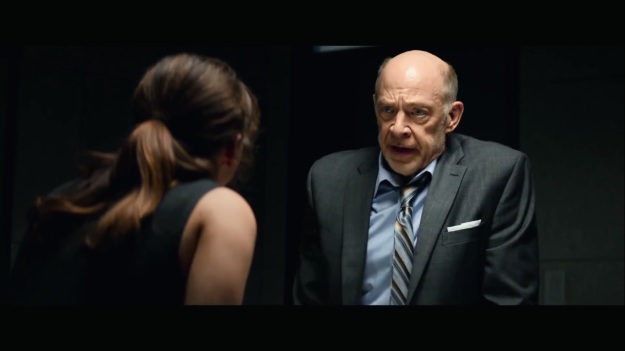 “So wait.  Your future son sent his own father back in time to impregnate you?”     “That was the plan originally, but things have changed since then.”     “Hold on, how do plans change when THEY’RE in the future and YOU’RE in the past?  Shouldn’t they know what the plans are then?”