It’s probably too soon to say we’re out of the New Year Doldrums just because this movie came out, especially considering it played the festival circuit throughout most of 2015,  but whether or not this release can be used to determine a trend at the multiplexes, at least it’s something interesting to break up the mundanity and outright crappiness that we can usually expect for the first two or three months of the year.  Does this movie deserve all the praise it’s been getting, or is this another overhyped festival darling that’s being release now because it couldn’t hack it during a better time in the mainstream circuit?  Let’s find out!!

The movie follows a family of ultra-religious pilgrims who have voluntarily left the settlement to live on their own and practice their own brand of conservative Christianity in peace.  Just to clear, these are the Puritans who thought the Puritans that left England to separate themselves from that sinful country were not pure enough for them.  Clearly leaving them to their own devices is going to end well for everyone.  Spoiler alert: It does not because not too long after William (the father played by Ralph Ineson) sets up their homestead just outside the woods, the baby son seems to have disappeared out of nowhere.  What happened to him?  Oh trust me.  You will find out very quickly what happened to him.  Needless to say that losing one of the kids does not sit well with either the parents (especially the mother played by Kate Dickle) or the baby’s siblings of which there are four (Thomasin played by Anya Taylor-Joy, Caleb played by Harvey Scrimshaw, and the twins Mercy and Jonas played by Ellie Grainger and Lucas Dawson).  Now it’s clear to us that somewhere deep inside the woods is a witch, but the family hasn’t come to that conclusion yet and as things get stranger and stranger, they begin to suspect one another which only escalates conflicts and weakens their sense of morality which is easily replaced by fervor.  Can this family get over the loss of their child and come together to hash out whatever differences they may have?  Will the witch’s devious motivations become clear as her corrupting influence permeates though the unwelcomed guests?  WHY IS THAT GOAT STARING AT ME!? 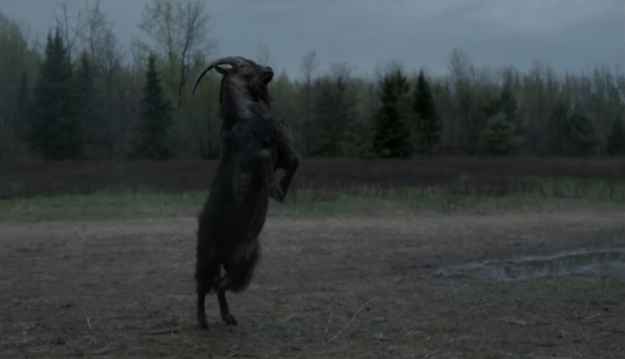