Did anyone know about this movie more than a week ago?  I certainly never got a trailer for it despite being a horror movie being released right around October, but then again I guess Halloween is gonna keep soaking up all the attention this year which is even leaving stuff like the Suspiria remake out of the spotlight.  I remember back when Blockbuster was a thing (BACK WHEN DINOSAURS RULED THE EARTH!) I would rent a bunch of horror movies, and I have very vague memories of one taking place at a circus.  It MIGHT have been Funhouse I guess?  I honestly don’t remember, but a horror movie set at a spooky amusement park sounds like a match made in heaven and may even twinge a bit of nostalgia or the days when I would rent basically anything in the horror section with an R-rating.  Does this manage to be a fun throwback to the carnival horror movies of yore, or is this just another by the numbers horror film made on the cheap to try and recoup its budget in a single weekend?  Let’s find out!!

It’s that time of year again where the college kids take a break from their arduous studies to enjoy the spookiest month of the year!  Yes, its Halloween time and Natalie (Amy Forsyth) finally has a chance to take a break and reconnect with her friend Brooke (Reign Edwards) and maybe even hook up with the hot stud Quinn (Christian James) who’s been asking about her!  Along with Brooke’s roommate Taylor (Bex Taylor-Klaus), her boyfriend Gavin (Roby Attal), and Taylor’s boyfriend Asher (Matt Mercurio), they head off to the most awesome amusement park of all time, HELL FEST!  Imagine if the bad guys in all the pre-Nolan Batman movies went into Performing Arts instead of a life of crime and you basically have an idea of just how rad this amusement park is, but something is amiss!  You see, among the merriment and fog machines, there’s an ACTUAL serial killer lurking around in a silly mask who decides that Natalie and her friends are gonna be his next targets.  Will the group be able to escape from the park with their lives and not just because they’re risking their health with that extremely greasy carnival food?  How will they even be able to protect themselves when everything in the park looks spooky and murderous already?  How is it that the last noticeable thing about this movie is the guy who’s ACTUALLY cutting people up!?  Seriously, buddy!  It’s called showmanship, and you’re being outclassed by strobe lights and a scary sound effects CD!

END_OF_DOCUMENT_TOKEN_TO_BE_REPLACED 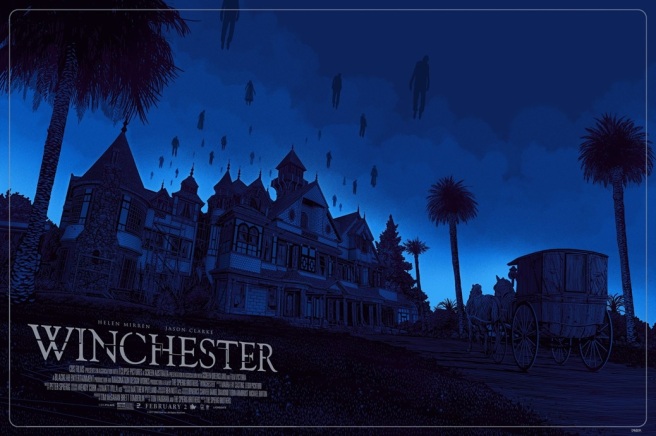 SERIOUSLY!?  We managed to go through ALL of January without a single notable horror movie!?  Okay, I mean there was that INSIDIOUS movie but that one doesn’t count because… I didn’t see the other films.  MY POINT IS that it’s been PRETTY light so far for a month known almost EXCLUSIVELY for terrible horror films, and for me this is the first one of the new year so I’m STILL gonna consider it a January horror film!  Besides, that’s not even a particularly hard rule of thumb considering last year’s worst horror abomination Rings didn’t make it out the gate until the first week of February either.  Will this be another entry in the never ending list of terrible first of the year horror movies, or are the people behind this just too darn talented to make the same mistakes that everyone else did?  Let’s find out!!

The movie follows the story of Sarah Winchester (Helen Mirren) who is the widow of William Winchester; the man who started the Winchester Repeating Arms company and got SUPER rich doing so.  Now she has all this money, but she’s been using it to build and rebuild and rebuild and add on and then do some MORE rebuilding on here house.  Why is she doing this?  Well she believes that the ghosts of the victims of Winchester rifles, instead of haunting say… their murderers, are haunting her house and I guess the multiple rooms and weird architecture confuses them or something.  Anyway, Dr. Price (Jason Clarke) has been sent by the Winchester Repeating Arms company to assess the mental fitness of Sarah in an attempt to oust her from the company, but he’s not interested in being their lap dog and seems to genuinely want to help her; not like he’d get away with being so duplicitous what with her niece Marion (Sarah Snook) watching his every move.  Of course, things start to get strange almost immediately as Eric starts to see creepy things of his own and Marian’s son Henry (Finn Scicluna-O’Prey) is “sleepwalking” all over the place.  Is Miss Winchester correct in believing that there are ghosts in her house and that they’re after her for what her company’s weapons did to them?  Does Dr. Price have a much deeper connection to this place than either he or Sarah initially thought?  Why does it matter if the house is a confusing maze of dead ends and random staircases!?  GHOSTS ARE NON-CORPOREAL!!

END_OF_DOCUMENT_TOKEN_TO_BE_REPLACED 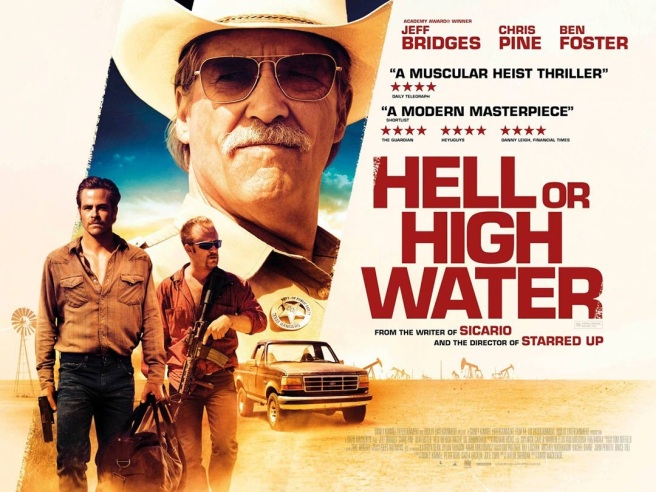 Can we say award season is in full swing now?  Have we run out of DC films to be disappointments after collecting half a bajillion dollars instead a full bajillion?  Sure, Doctor Strange is in November and we’ve got a few more animated kids films to suffer through, but the deluge of lightweight and over budgeted boom-a-palooza is over?  Well we can only hope, but what we should be hoping for even MORE is that the Oscar bait this year is up to snuff and not a bunch of studio films that cut the budget and let the actors look pensive for minutes on end set in World War 2.  At least with this movie, things seem to be off to a good start as this is a down and dirty Texas crime movie starring well known genre actors as well academy award winning ones!  Will this be one of the best films of the year (Oscar bait or otherwise), or is there just a bunch of hot air surrounding a mediocre actioner?  Let’s find out!!

The movie begins with two kinda dopey dudes robbing a small time bank in a small time town in East Texas.  They manage to get away clean, more so out of dumb luck than their own skill, but I guess that’s the advantage of robbing bum-fuck nowheres-ville.  The two end up hitting a few more places in a similar manner, also getting though it by the skin of their teeth, and this gets the attention of Texas Ranger Marcus Hamilton (Jeff Bridges) who’s on the verge of retirement but thinks he can nab these two before he finishes up his tenure.  He drags along his partner Alberto (Gil Birmingham) to check on those places that have been hit and see if they can predict where the two are gonna strike next, all the while running into reminds of how miserable these areas are due to the recent recession.  Our nominal heroes by the way, brothers Tanner and Toby Howard (Ben Foster and Chris Pine) are victims of said misery, but their exact motivations aren’t clear yet as to why they’re raising money and how much of it they need.  Will the cops stop the robbers before they can reach their goal?  What are Jeff Bridges chances of making it out of this alive considering he’s days from retirement?  Is it REALLY that hard to catch these dumb mother fuckers?