I may not be as over the moon in love with The Room as plenty of other people are, and it has admittedly lost a bit of its charm once you realize just how misogynistic the whole thing is, but it certainly has my respect as being one of the more unique examples of a GOOD BAD MOVIE due in no small part to the auteur himself, Tommy Wiseau.  Now he’s far from the only ridiculously cocky creatives out there who write, direct, and star in what they perceive to be their one true masterpiece (*cough* Old Fashioned *cough*), but with Mr Wiseau there’s a genuine sense of mystery about the guy as many details of his origin are STILL unknown to this day (HOW IS THAT EVEN POSSIBLE IN THE INTERNET AGE!?) and his… shall we say UNIQUE brand of acting certainly sets him apart from many of the other low rent struggling artists out there.  No doubt there is a VERY interesting story to tell about this one guy, his one movie, and his friendship with co-star Greg Sestero, which the wannabe auteur himself James Franco has opted to do by adapting Greg’s book The Disaster Artist into a motion picture; one that he directs, produces, and stars in of course.  Will this examination of one of Hollywood’s biggest oddities be a worthwhile exploration of the creative process and what it truly means to be an artist, or are we just desperately trying to milk a novelty that had lost its luster many years ago?  Let’s find out!!

The movie follows the journey of two men; aspiring actor Greg Sestero (Dave Franco) and… I guess aspiring actor as well Tommy Wiseau (James Franco).  The two meet in an acting class where Greg finds the eccentric weirdo with bad hair and a worse accent rather endearing for his utter fearlessness and ability to throw himself out there in ways that Greg is still struggling to do despite his hopes of becoming an actor.  Because of Greg’s admiration for Tommy and Tommy’s love of being admired, the two move in together and work their way through Hollywood; getting small gigs here and there but nothing that will truly set them apart from the thousands of other working actors cluttering the streets of LA.  After a particularly rough string of bad luck, Tommy eventually starts writing his own movie and wants none other than Greg himself to be the co-star.  The Room is what he titles his masterpiece and he funds it himself with his seemingly unlimited supply of money but things go from awkward to unsustainable as Tommy’s ego and complete inexperience with the process starts escalating tensions with the cast and crew and even with his best friend Greg who’s trying to stick by him but is finding it hard and harder to deal with Tommy’s unpredictable behavior.  Can Tommy find it within himself to get past his issues and foster a good working environment for the only people in the world who are helping him achieve his dreams?  Will Greg stand by his best friend, or will he realize just how much Tommy is holding him back?  WILL THE WORLD EVER UNDERSTAND THE BRILLIANCE OF THIS ONE MAN’S VISION!?

END_OF_DOCUMENT_TOKEN_TO_BE_REPLACED

Look, I’ve been dreading this one since they released the first image of them in their power suits, and everything since then just seemed to confirm my suspicions about what this movie was going to be.  On top of that, while I do have a soft spot for some Power Rangers/Super Sentai stuff (I have the movie with Ivan Ooze on VHS and I’m a pretty big fan of Tensou Sentai Goseiger), my knowledge of the Mighty Morphin iteration of this franchise is pretty limited.  It’s an odd place to be in when going into this movie as I’m someone who still needs to be taught pretty much everything about the movie, but I’m also gonna be more aware than most when it comes to how much this diverts from what the core of Power Rangers is supposed to be.  Now I don’t often go into movies READY to hate them, but there have been occasions where I went in knowing that there’s a pretty good chance I’ll end up hating it, and this is one of those times.  Now that’s not to say I wasn’t going to give this movie credit if it DID end up being great… it was just that my expectations were very low from the outset.  Did this movie ultimately prove me wrong and ended up being a worthwhile reinterpretation of the original series as well as a great continuation of the Power Rangers brand, or was this movie everything I dreaded it to be and so much worse?  Let’s find out!!

As I’m sure we all know, the story of Power Rangers is about five teenagers with attitude who are chosen by the Great and Powerful Zordon (Bryan Cranston) to fight alien monsters who threaten their small town of Angel Grove and by extension planet Earth.  This sticks pretty close to that, though replace teenagers with attitudes to teenagers with angst, tragedies, mean streaks, and felonies, and replace chosen with begrudgingly accept because unlike the previous version, the teens find Zordon rather than the other way around.  COINCIDENTALLY ON THE SAME DAY THAT THE TEENS FIND ZORDON, Rita Repulsa (Elizabeth Banks) is fished out the ocean instead of being uncorked from some canister on the moon, and proceeds to run amuck in Angel Grove while slowly gaining her powers back.  Now the new Power Rangers which are comprised of Jason, Kimberly, Billy, Trini, and Zack (Dacre Montgomery, Naomi Scott, RJ Cyler, Becky G, and Ludi Lin) must come together as a team and fend off the bad guy before she finds the McGuffin of Ultimate Destiny (I think they called it a Zeo Crystal) and… blows up the Earth I guess?  Can these teens who aren’t even friends to begin with find a way to overcome their differences and beat the crap out of the space witch?  Will they learn to control their individual animal robot vehicles in time to fend off Rita’s gold monster thingy and eventually come together to form one giant robot?  WHY IS EVERYTHING I JUST DESCRIBED SO DISAPPOINTINGLY REALIZED IN THIS MOVIE!?

END_OF_DOCUMENT_TOKEN_TO_BE_REPLACED 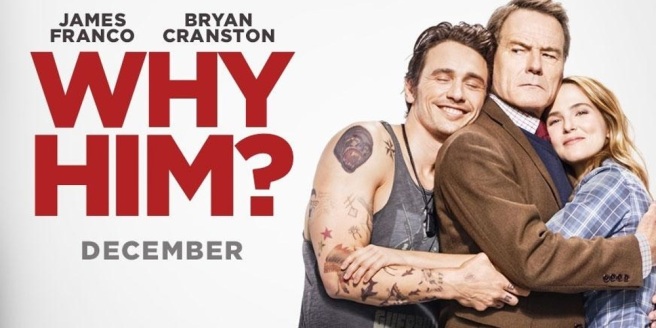 Why Him? and all the images you see in this review are owned by 20th Century Fox

Ugh… so just because Daddy’s Home was a decent movie means we’ll be getting raunchy sitcom movies every Christmas?  I’ve been dreading this movie since the first trailer came out; not just because of how bad it looks, but because it has two REALLY talented leads in it who both can be doing so much more than… whatever the this is supposed to be.  Oh well, I could be wrong.  After all, Daddy’s Home looked almost as bad as this film, and I ended up enjoying that quite a bit!  Can this be the surprise hit of the holiday season; even with Rouge One and Sing looing large over the multiplexes!?  I kinda doubt it, but let’s find out!!

The movie is all about the Fleming family; headed up by Ned (Bryan Cranston) and consisting of wife Barb (Megan Mullally), teenage son Scotty (Griffin Gluck) and grown up daddy’s girl Stephanie (Zoey Deutch). Without much warning, the family finds out that Stephanie has managed to land a boyfriend while at college and that she hadn’t bothered to tell them about him for months now, so OBVIOUSLY she has to drag them out to California just so they can meet him and of course this happens during the holidays so we can add that bit of tension on top of things.  When the family arrives they find that the man of Stephanie’s dreams is some dude nearly forty named Laird Mayhew (James Franco) who acts like he’s still in college and is never called out on his shit because he is LOADED.  Yeah, something about a monkey war game app which has to be Candy Crush levels of popular for him to be THIS rich, but it doesn’t matter.  The important thing is that this overzealous bohemian stoner has ensnared the heart of Ned’s baby girl, and while there’s not much he can do to stop this, he’ll be damned if he enables this.  That attitude comes to a head when Laird confides that he is going to ask Stephanie to marry him on Christmas Day and wants Ned’s blessing which he doesn’t get.  Not one to give up though, Laird promises to make this the best weekend ever and try to convince Ned that he’ll be a good husband for Stephanie and the best son in law ever!  Will Ned warm up to Laird’s unique ways of expressing himself and accept him for who he is?  Will the rest of the family fall in line with Ned, or will they be enticed by Laird’s limitless supply of money and video games?  Is anyone else finding this just the TINIEST bit creepy?

END_OF_DOCUMENT_TOKEN_TO_BE_REPLACED

So… Bryan Cranston is going back to the well, huh?  You can hardly blame him though!  Breaking Bad is one of the most influential and critically praised shows to ever come out, so if anyone deserves to be in a movie about drugs and violence, then it’s the guy who made that shit work for five seasons!  Does Bryan Cranston come out on top once again with a movie tailor made for his particular set of skills, or will this just be an actor trying to relive their glory days before sinking back into obscurity and finding a niche in shitty comedies (*cough* Why Him? *cough*)?  Let’s find out!!

The movie which is BASED ON A TRUE STORY (ugh…) follows Robert Mazur (Bryan Cranston) who is a Federal Agent working for US Customs and primary does undercover work to bust drug dealers.  Apparently petty drug dealers work with a lot of fifty year old dudes who look like Target managers, but I guess that just makes Robert that much more of an unassuming figure.  Anyway, his colleague Emir Abreu (John Leguizamo) gives him a tip that some big players in the Columbian Cartel (at the time being led by Pablo Escobar as this movie takes place in the eighties) will be in town and are in the market for a money launderer (at least I think that’s what the tip is about) and so he starts posing as an accountant who’s more than willing to handle the Cartel’s money; hoping to bust them for the drugs and the bankers at The Bank of Credit and Commerce International who are willingly doing this for them.  Of course with any undercover work, there’s always the danger of getting himself and his fellow agents caught, especially Kathy Ertz (Diane Kruger) who is playing his pretend fiancée who’s only part of this mission because Robert fucked up at one of the meetings with the drug lords; not to mention that with any undercover work there’s always a chance of getting in too deep.  Can Robert bust these guys before getting a bullet in the back of the head or worse?  Will his real life crumble to pieces as he gets more and more engrossed in his work?  WILL HE BE THE ONE WHO KNOCKS!?