With the release of a new Halloween movie that’s getting everyone reinvested in the franchise, it seems like the right time for me to really dive into something I’ve always been curious about but never found much information on; namely the Halloween Novels!  Yes, there were three books written about Michael Meyers that weren’t adaptations of the movies, and what’s probably the most interesting thing about them is that, outside of co-creator Debra Hill, they are the only official Halloween media I can find that was created by a woman.  Now I don’t this to come off as diminishing Debra Hill’s SIGNIFICANT contributions to the franchise (not to mention Jamie Lee Curtis as well as Danielle Harris who played Jamie Lloyd) but the director’s chair as well as writing duties outside of the first two films have ALL been held by men, so it feels at least SOMEWHAT significant that between 1997 and 1998 Kelly O’Rourke was tapped to write The Scream Factory, The Old Myers Place, and The Mad House; all three starring the one and only original slasher villain and all three are EXTREMELY hard to find!  No seriously, if you want to read these you’re gonna have to drop some serious cash as listings go in the hundreds and none of them are available in any digital format. 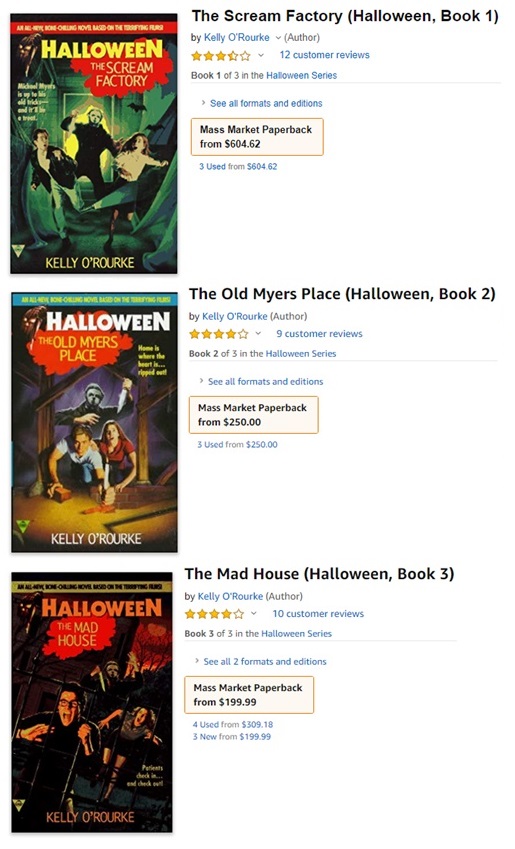 Sadly this means that actually READING them is pretty much a no go, but we at can gleam a few details from a few sources out there with the best I’ve managed to find being Lair of Horror which has a really good amount of information about each of the books, so let’s look at them one by one!