Incarnate and all the images you see in this review are owned by Blumhouse Tilt, High Top Releasing, and Universal Pictures

I go to see a lot of movies, and I don’t think I saw a single trailer for this at any of them; not even other horror films or Blumhouse productions.  That seems pretty strange though considering they’ve got a well-known actor in here with Aaron Eckhart who may not be quite A list, but should be enough to sell a movie like this, and yet it seems to have slipped completely under the radar.  That’s usually a bad sign, but it’s not always the case as films like last year’s We Are Your Friends was a movie I never heard of until I went to the theater to see it, and that turned out to be pretty solid; especially compared to other Zac Effron outings like Dirty Grandpa and Mike and Dave Need Wedding Dates.  Maybe the same is true for this little horror flick.  I mean… it’s possible… right?  Either way, let’s find out!!

The movie begins as most demon possession movies do with a young child getting his soul hijacked from some horrifying hell spawn with the victim here being Cameron (David Mazouz) who seems to catch it from this homeless woman as the demons here apparently jump from host to host.  Naturally, the Vatican is all over this and sends out one of their representatives (Catalina Sandino Moreno) to keep an eye on things, but it soon becomes clear that conventional methods are gonna take care of it this time.  Instead, she calls upon… Dr. Seth Ember (Aaron Eckhart)!  Who is he?  Well he’s some guy who looks to have watched Inception a few too many times and has come up with a new exorcism technique where he goes into the mind of those possessed and convince their subconscious or whatever to reject the monster that is feeding off of their soul.  Of course, Dr. Ember isn’t some bright eyed idealist who’s doing this for the good of mankind!  He has a DARK PAST full of TRAGEDY and WOE, and the techniques he’s developed were all in service of killing ONE DEMON SPECIFICALLY who has something to do with said tragic past.  Of course, it JUST SO HAPPENS (or maybe not?) that the kid is being possessed by that ONE SPECIFIC DEMON, so Dr. Ember begrudgingly takes the case along with his two hipster tech brats Riley and Oliver (Emily Jackson and Keir O’Donnell).  Will Dr. Ember finally gets the vengeance that has eluded him all these years?  Will he be able to save Cameron in the process, or will Ember see him as expendable in the pursuit of a greater goal?  What… exactly did I just sit though?

END_OF_DOCUMENT_TOKEN_TO_BE_REPLACED

It has been a while since I’ve seen a Clint Eastwood movie.  I’m pretty sure the last one I saw was Gran Torino which was pretty excellent and honestly a really good swansong for the ACTOR Clint Eastwood even if he’s continued to direct since then.  Still, I definitely have some catching up to do here, and what better way to do so than with his new movie about his favorite subject?  Heroic men doing awesome things and then people trying to punish them for it!  Turn in your wings Sullenberger!  YOU’RE OFF THE CASE!!  Does this look into one of America’s modern folk heroes turn out to be another winner for the venerable director, or is Clint Eastwood just spinning his wheels at this point?  Let’s find out!!

The movie begins a few days after the Miracle on the Hudson, where Captain Chesley “Sully” Sullenberger (Tom Hanks) and his copilot Jeff Sliles (Aaron Eckhart) managed to not only land their plane that had blown BOTH engines into the Hudson River, but managed to do so without losing a single passenger!  All’s good then, right?  Well… there inevitably has to be an investigation to find out what exactly happened and if Sully endangered more people doing what he did rather than trying to head back to a nearby runway.  Fair enough I guess, but compound that with the whole world staring at him while ALSO dealing with the Post Traumatic Stress of the crash itself, then you’ve got a recipe for a man about to snap under the pressure which won’t exactly help his case that he’s a trained and objective professional who’s decision to land in the Hudson was the best one.  Can Sully convince the NTSB (National Transportation Safety Board) that he shouldn’t be shit canned for being a hero?  Will he handle this immense pressure with grace and inhuman composure?  Is the insurance company not gonna cover this!?

END_OF_DOCUMENT_TOKEN_TO_BE_REPLACED 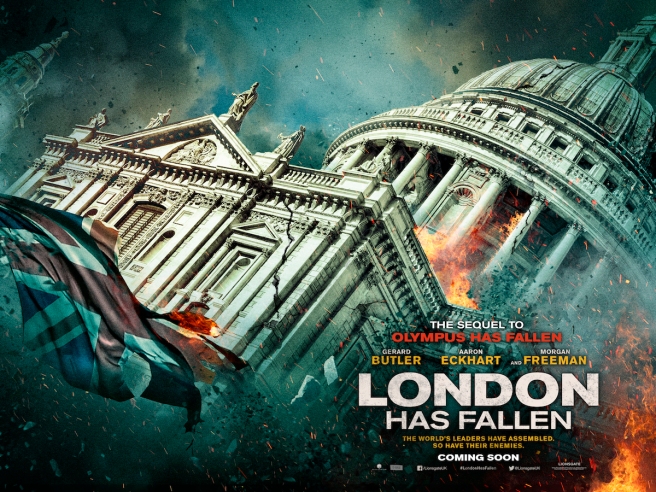 London Has Fallen and all the images you see in this review are owned by Focus Features, Gramercy Pictures, and Lionsgate Films

Look, Gods of Egypt was a mistake, alright?  Gerard Butler was certainly not the ONLY one responsible for that catastrophe and was frankly one of the few saving graces for a movie that deserved none.  He’s learned his lesson though and is coming back with a sequel to probably his second most popular film (after 300).  Will this be the shot in the arm his career needs after that unfathomable mess, or will this befall the same fate of pretty much every other sequel to a surprise hit which is to crash and burn spectacularly?  Let’s find out!!

The movie follows Secret Service agent Mike Bannon (Gerard Butler) and President Benjamin Asher (Aaron Eckhart) who are in London so that the President can attend the funeral of the recently deceased Prime Minister.  Not only is he in attendance though, but so are many leaders of the western world which is something this movie seems to think has NEVER happened.  Uh… world leaders get together all the time.  Has this movie ever heard of the G8 summit?  Anyway, the death of the Prime Minister turns out to be a ploy for a known arms dealer Aamir Barkawi (Alon Moni Aboutboul) to take his revenge on the US (and presumably the rest of the G8) for a drone strike that was targeting him, but managed to kill everyone at his daughter’s wedding.  There’s only ONE person who seems to think that something might be up though, and when shit hits the fan Mike Bannon is on the job to save the president and kill as many bad guys as possible!  While this is going on, Vice President Allan Trumbull (Morgan Freeman) is dragged back into the situation room to deal with ANOTHER crisis where the President is smack dab in the middle of utter chaos and he does… stuff.  I think.  Will Mike be able to save the President and the free world before the day is over? Is there a mole in the British military or spy network that helped these terrorist pull of their plan?  Did all the people they dragged back in from the first movie at least get a nice paycheck out of this?

END_OF_DOCUMENT_TOKEN_TO_BE_REPLACED 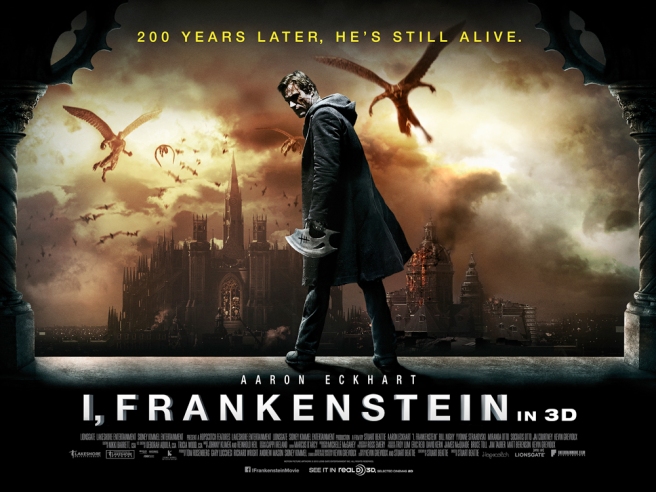 This 2014 film based on a graphic novel by Kevin Grevioux (who also wrote all the Underworld movies), somehow take the Frankenstein monster and has him fighting legions of demons.  Well you can’t say that’s not one of hell of premise!  I’m actually for wacky premises like this with characters you’d never expect.  Hell, it’s not like Universal was above putting it’s own monsters in crazy and outlandish situations to make a quick buck!  They’re the guys who practically invented the idea of cross over movies!  All that said, the lukewarm buzz around this film when it was released doesn’t give me a whole lot of hope, but you never know with something like this.  Is the movie a fun and cheesy romp, or is it just as bad as every says it is?  Let’s find out!!