Remember when I talked about that Banana Splits Movie trailer as well as the current state of Hannah-Barbara properties?  Remember how I said I’d review the Suicide Squad/Banana Splits crossover comic?  Oh to be so young and so naïve as I was… two months ago.  Seriously, I was CERTAIN that I already reviewed this thing, but as the release date for that Banana Splits movie started to get closer and closer, I tried to find the review on this website and nothing! Nada!  Zilch and so on!  Well better late the never, I suppose, and I still managed to finish this blasted thing before the movie came out, so I’ll take my small victories where I can!  ANYWAY!  Does this comic capture the spirit of the original series and make the Banana Splits relevant again?  Well no, because I already told you that when I talked about it back in June, but let’s take a look anyway!!

The issue begins with The Banana Splits (Fleegle the beagle, Bingo the ape, Drooper the lion, and Snorky the elephant, though the issue doesn’t even bother with introductions) being pulled over for what I can only assume is speeding, but then again it wouldn’t surprise me if it was for driving while furry considering what happens next.  You’d think the cops of the DC Universe would be used to non-humanoids by now, but it seems like the writers are trying to make some sort of cultural critique here about police brutality and the criminalization of non-white bodies.  I mean I GUESS I can appreciate the effort but I don’t think THE BANANA SPLITS are the best vehicle for it.

In any case, this is the tortured means by which we get them thrown in jail and eventually recruited for Task Force X; i.e. The Suicide Squad.  I’m PRETTY sure they haven’t been charged, tried, or convicted yet, and being rock stars they could probably afford bail, but maybe the DC Universe runs on Phoenix Wright logic and everything is ridiculously sped up.  The point is, they JUST SO HAPPEN to be in jail at the same time Amanda Waller needs some new recruits to help Deadshot, Killer Croc, Harley Quinn, Katana, and Rick Flag have screwed the metaphorical pooch on their covert operation.  I guess Captain Boomerang is busy and these guys were the next best option… somehow. 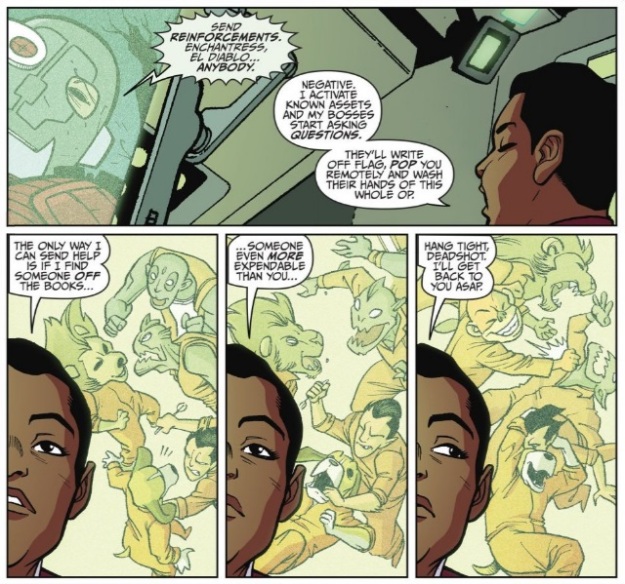 It’s gonna be SO impressive when James Gunn manages to pull this off.

So before we go any further, can we talk about the Splits themselves?  I’m not about to sit here and say they were a fount of personality and depth back in the sixties, but this reinterpretation of the characters is so out of left field (they’ve never been seen before or since this one issue in the DCU) that whatever novelty in having them show up here quickly wears off as there’s just no rational to any of this and no reason to be invested.  Space Ghost with Green Lantern?  That makes sense.  Snagglepuss as a fifties playwright?  Brilliant!  Heck, I’ll even give them credit for that god awful Dick Dastardly and Muttley… thing for at least going high concept with it.  This is like when sitcoms would have the celebrity guests come on as themselves and finding a way off of Gilligan’s Island or catching their delayed flight after their twenty-two minutes is up.  Heck, it’s even worse than that as it feels more like they couldn’t get the ACTUAL musicians and had to settle for a cover band instead!

On next week’s episode of Task Force X, Tim Conway will stop by along with The Captain & Tennille to slit throats and break funny bones!!

Alright, well now that Waller has sprung them from jail, given them heavy weaponry, and even some nice new threads, we might as well get this show on the road before I lose what little interest I can muster.  Waller puts them on a plane and has them HALO jump into whatever snowy heck hole the Squad is stuck in, though for some reason they do so without any oxygen which seems like a bad idea to me (THAT’S HOW YOU GET DECOMPRESSION SICKNESS!), but let’s not dwell on the little things in a comic about animal musicians teaming up with supervillains.  Speaking of whom, for a tema that supposedly has their back against the wall, The Suicide Squad seesm to be doing just fine when the Splits find them!  Heck, none of them are even injured, the crybabies!  Sure Flag’s been captured by the bad guys (the ACTUAL ones; not the fun ones we’re following) but does anyone even like him in the first place?  Oh right, the bad guys.  So the big bad menace that put The Suicide Squad in such dire straits is… the Midwich Cuckoos only all-female and actually robots.  I’m starting to think The Banana Splits are exactly the kind of backup they deserve. 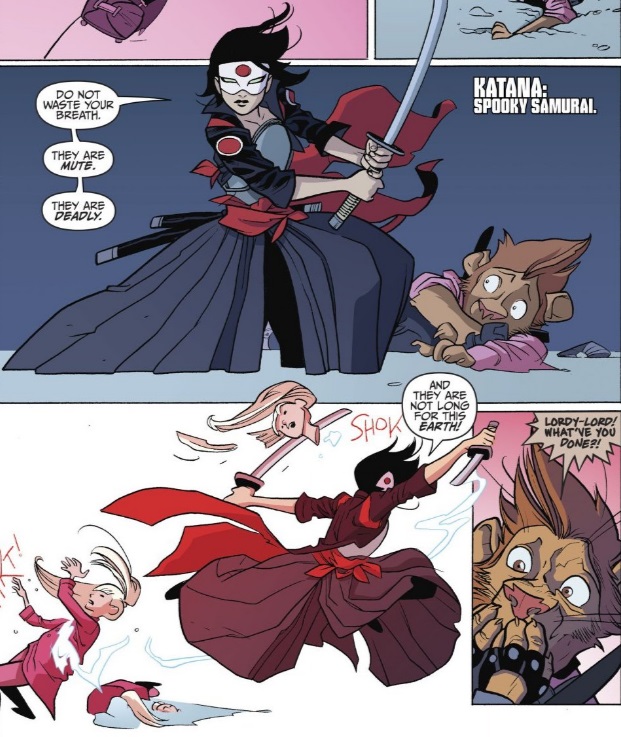 Hey, if he wasn’t down for slaughtering school girls he shouldn’t have enlisted in the first place!  It’s not genocide; it’s patriotism!

Okay, so now that the band’s back together (nyuk-nyuk-nyuk), what’s the plan to get this over with as quickly as possible?  Well they have to rescue Flag who’s being interrogated by the robots and they ALSO have to blow up the factory where they’re being built so they don’t… I don’t know; take over the world I guess?  It’s mostly just action panels at this point; showing off the Squad and reveling in the novelty of seeing the guest stars in such a violent scenario.  I don’t read Suicide Squad so I couldn’t tell you if the writing here is subpar to the rest of the series, but it’s a one shot starring a D-list Hanna-Barbera property so I’m not gonna be too sour about the straightforward and rather shallow story.

“What even are you, anyway!?  Are you one of those ‘furries’ I’ve been hearing about!?”

That having been said, I’m not about to give this a pass just for the low expectations it sets for itself; especially once we get to the ending.  The Squad saves Flag, the factory explodes for some reason, and the Splits are free to go; presumably as soon as they return their military hardware and after a stern talking to from Waller about keeping secrets.  The story doesn’t end there however as their experience in the clink (for what, four hours?) has changed them and they want to reinvent their sound; switching from Bubblegum Pop to…

So that’s it!  That’s what DC Comics thinks of The Banana Splits and is frankly why this special is so underwhelming.  No one gave a crap about these characters, about their place in pop culture history, or about making them relevant for the twenty-first century.  I mean for crying out loud, STRAIGHT OUTTA COMPTON WAS THIRTY YEARS AGO, and the BEST idea they could think of was to inartfully parody that song for a cheap gag?  There’s NOTHING that they could think of with these characters and this property to sincerely bring it to the modern day other than to shove weapons in their hands and have them rap on stage?  This is why that movie looks terrible too by the way; at least as far as the trailer shows us.  Deconstructions can sometimes work if you take something outdated and try to find how it would fit in a modern context.  Outright mocking something?  Not so much!  The Banana Splits are laughable, cheesy, and aged about as poorly as milk in a deep fryer, but not even trying and so shamelessly plugging them into something like this is the most blatant kind of cheap cash in and nothing else about the book really compensates for that.  I mean let’s HOPE the movie is at least better than THIS, but I’m not about to hold my breath.