I mean if nothing else, this can’t be a worse Mother’s Day film than Mother’s Day.  Well that’s a bit unfair as I DID like what I saw in the trailers which involved Gabriel Union kicking the crap out of a bunch of home invaders, and a basic premise like that is almost foolproof in how easy it is to at least make a COMPETENT thriller with it.  Does this latest entry in the genre prove to be a breath of fresh air and something wholly original, or is this yet another run of the mill action film that doesn’t live up to its marketing campaign?  Let’s find out!!

Shaun Russell (Gabrielle Union) is a mother of two (Seth Carr and Ajiona Alexus) whose father (Damien Leake) had recently died and she’s in charge with handling the estate.  She drives out with her kids to the dude’s summer home which is a giant fortress of a place with an extremely elaborate security system and a whole lot of bad memories if Shaun’s reactions are anything to go by.  Sadly the unpleasant memories are the least of her problems as she soon finds out that three criminals (Billy Burke, Levi Meaden, and Richard Cabal) were already there searching for the old man’s secret stash of cash.  Now that Shaun and her kids are there though, they have to readjust their plans and start taking hostages.  The good news is that they manage to get the kids.  The bad news?  Shaun slips right out of their hands and is now SUPER pissed!  Can Shaun save her family before the bad guys get desperate?  What secrets were her father hiding in the house, and are they worth killing for?  Will Shaun tap into her inner Liam Neeson and teach these bastards a lesson in who NOT to fuck with!? 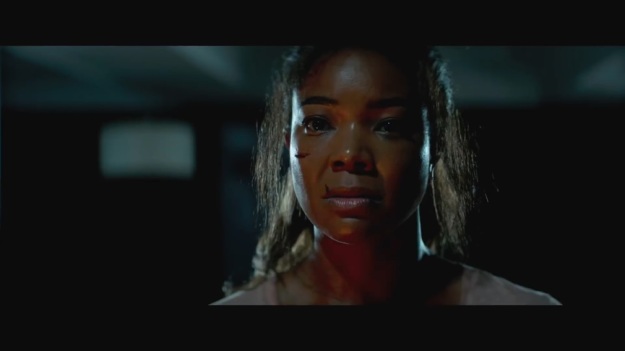 Frankly, I’m a bit disappointed by this.  Maybe I was expecting a bit too much from the trailers, but this is an EXTRAORDINARILY average movie that doesn’t have much to say nor anything particularly creative to try.  There are no real surprises, everything is done COMPETENTLY but without much imagination, and while a few of the performances are solid throughout, a few fall a bit flat and at least one is downright offensive to watch.  Is it bad?  Not PARTICULARLY I guess, but there are so many other movies that do this premise with much more passion and energy that it just feels rather pointless.  Lots of missed opportunities more than anything else as there’s more than enough in this premise to make something great, and everything feels so much lighter, softer, and blander than what the trailers are selling and what the film sets itself up to be which is a shame considering this is the same director behind the brilliant V for Vendetta.  Say what you will about that movie, at least it wasn’t visually mundane!  Honestly, that Traffik movie looks WAY more interesting and I’m STILL annoyed that it never came to one of my theaters! 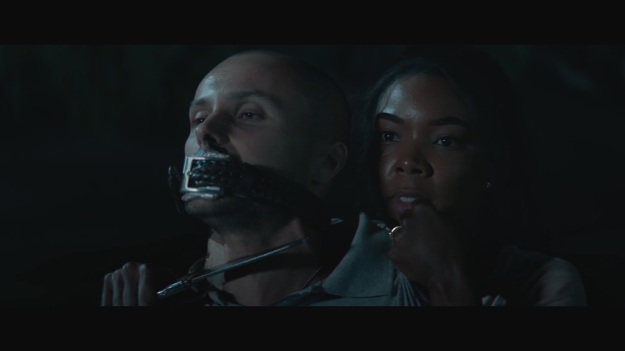 “Okay.  Not bad, but now try it with a bit more FIRE.  Remember, this is one of the dudes that took your kid!”

The biggest problem with this movie is that it exists without purpose.  It goes through the motions, has scenes that check off certain boxes, but none of it feels like it means anything or is even properly explained.  By the time shit is hitting the fan and the thieves make their presence known, there hasn’t been anything that’s been really set up about our characters and so the drama just isn’t there to carry the action.  The whole premise of the movie is that Gabrielle Union is in this super house that she got from her dad that she became estranged from, but that’s exactly as far as it goes and we never learn anything substantive about her, her father, or their relationship.  Why did Gabrielle Union stop talking to her dad?  Does she have any regrets about that?  Did he have any regrets about letting their relationship crumble?  Why the hell is his house decked out in an absurdly elaborate security system in the first place?  These are very basic storytelling questions that are never even brought up in the movie beyond the first fifteen minutes, so the whole BREAKING IN part of the movie feels completely separate from that.  It might as well be taking place in an Airbnb for how much the house itself plays into the story, and you never want an element THAT integral to the film to feel completely disposable.  This is also true for the rest of the characters as the kids don’t have much going on in their story other than to be the one thing keeping Gabrielle Union from just running to the cops or letting the crooks just take what they want, and every scene where it’s just them feels completely extraneous because of that.  Thankfully the bad guys at least get a MODICUM of development and personality even if they are total clichés. I’ve always liked Billy Burke as an actor and he does some solid work in this movie as the serious one losing control of the situation, and Levi Meaden is pretty solid as the one who was truly forced into this life simply to survive which is more nuance than anyone else gets in this movie.  Sadly though, the third guy on the team played by Richard Cabral is a completely offensive Cholo Stereotype who LOVES to hurt people and isn’t given the slightest bit of humanity despite his two partners in crime getting a fair bit of dimension and pathos, and of course he’s the ONLY Spanish character in the whole movie which just exacerbates the problematic nature of his role. 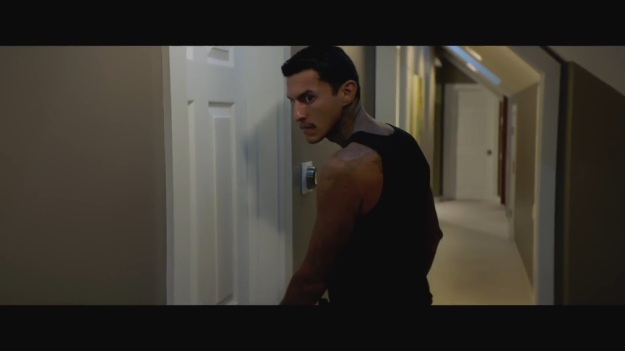 Now maybe it’s just me and everyone else out there will immediately attach themselves to these characters and their struggles which will only enrich the drama once we get the ball rolling on the home invasion.  If that’s the case, then the question is whether or not they do the home invasion stuff well on its own, and the answer is… mostly!  It feels rather toothless which is more than likely due to this being a PG-13, but there are some clever moments throughout and Gabrielle Union is more than capable in the role.  Now there’s still ZERO in-universe justification for her to be able to think this tactically and more or less physically outmatch a succession of career criminals (even Liam Neeson had to let the audience know he had a very particular set of skills), but that’s not TOO hard to get over considering the movie’s tone is rather light all things considered.  It’s not graphic, disturbing, or even particularly stressful which is why I felt a bit nonplussed about everything going on, but then it also means that this is one of the few home invasion movies that isn’t particularly stressful to watch which I’d certainly say is a point in this film’s favor.  It’ll play better to crowds that normally don’t go to movies like this and I expect that this will end up having a solid enough fan base down the road even if it won’t be a big success at the theaters, but for me it was rather predictable and kind of tedious due to how low stakes and “safe” it ultimately felt. 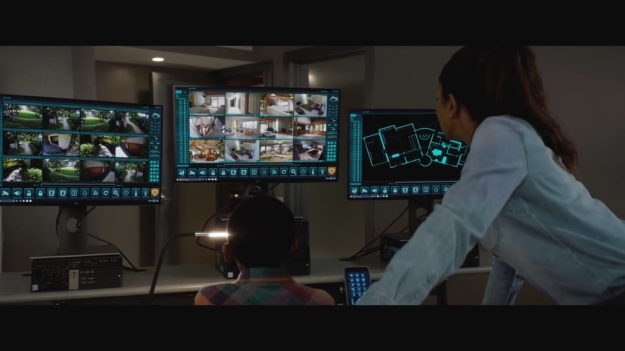 “We’ve got all the angles covered!  They’ll be absolutely no surprises here!”     “Good job, son!”

To try and put a more positive spin on this, I like that we have a home invasion movie starring a mother trying to protect her kids and that she’s show to be just as capable and determined any other action star who’ve been in movies like this.  Still, it doesn’t feel like the BEST attempt at doing something like this, and not just because it wasn’t gory or violent enough for my tastes.  I think of a movie like Trespass from 2011 starring Nicolas Cage and Nicole Kidman which is a FAR superior movie because of how much time and attention were given to the characters and their relationships as well as the stressful back and forth dynamic that the bad guys had with the people they were stealing from.  I got a LITTLE bit of that whenever Gabrielle Union confronted Billy Burke, but it’s another area where this movie is really lacking.  Even so, there’s some decent action in here, at least a few twists and clever moments to keep the pace rather brisk, and aside from its extraordinarily tone oblivious Spanish character, it doesn’t do much to offend or frighten its audience to instead focus on wish fulfillment and power fantasies for an audience that doesn’t get enough movies which deliver on that base emotional level.  It’s a kick ass motherhood story which is better than having no kick ass motherhood story, but there could have been so much more to it. 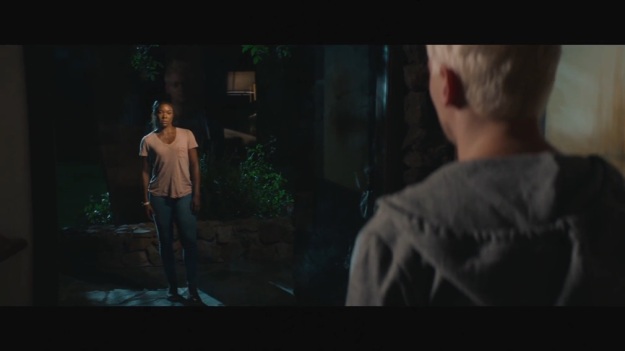 Where’s the Halloween theme when you need it?

I really can’t recommend seeing this movie in theaters if you have even a slightly passing familiarity to the genre.  Now there are plenty of people who aren’t which is fine and I think there’s a part of that audience that will be more inclined to enjoy this than plenty of other films that we may consider to be leaps and bounds better, but for me it was just kind of dull and only held up by a few solid performances; mainly from Union and Burke.  Everything else is just too pedestrian and mediocre to rise above the level of Pablum and even if you DO have an interest in seeing this, you might as well just wait for the home release as there’s just nothing to this that makes it a must see right now.  I’d certainly like to see more films LIKE this, but maybe ones with a bit more vision that takes a few more chances.  I once saw a Die Hard knock off where a football player has to take down a bunch of robots holding a bunch of hostages in a high rise.  I’m not saying it had to be THAT out of left field, but robots would have certainly livened things up a bit here!  Maybe they’re save that for the sequel.