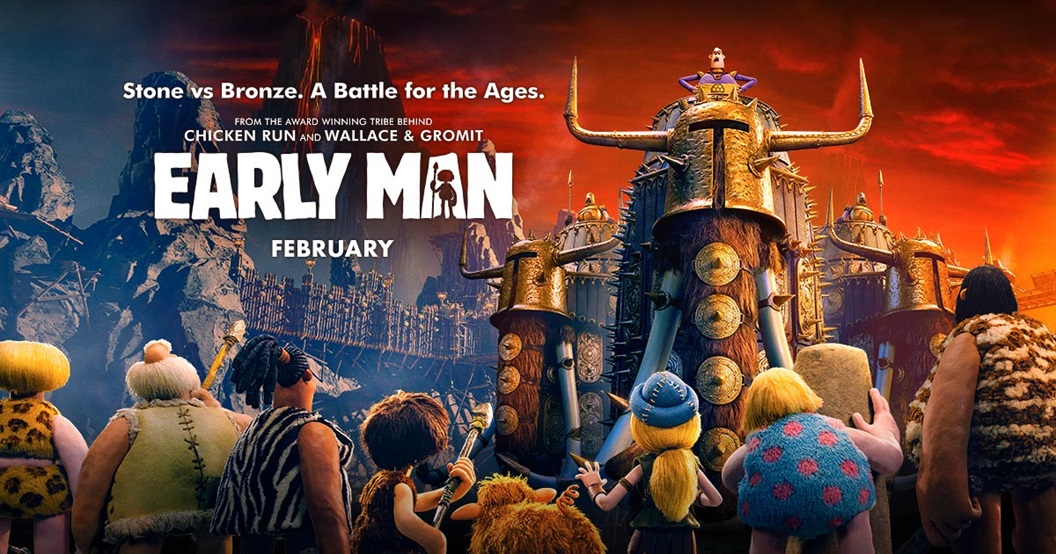 I remember watching those Wallace and Gromit shorts many times when I was a kid on VHS tapes (none of which I still have), and while I haven’t been keeping up with Aardman TOO much in the last decade, I have always respected them as a studio and have had nothing but good things to say about their work; including that Pirates movie which seems to have had a much more mixed reception than a lot of their other work.  Now we’ve got their most auditions work to date; not because it’s a particularly out there or unexpected from the studio, but because they had the gall to open it against Black Panther!  I mean I guess it goes with the David and Goliath underdog story this movie is trying to tell, but something tells me that the forward thinking and groundbreaking black centered super hero movie is gonna do a SMIDGE more business than this silly cartoon.  Does Aardman’s latest adventure hold up to the high pedigree that they’ve set for themselves over their long and prestigious filmography, or have the masters of clay lost their touch in this latest outing?  Let’s find out!!

The movie begins with Dug (Eddie Redmayne) who is the youngest and the most wide-eyed member of a tribe of cavemen that spends their days hunting rabbits and playing primitive instruments.  Dug dreams of something more though, like possibly hunting BIGGER animals (maybe even a Mammoth), yet the leader Chief Bobnar (Timothy Spall) doesn’t feel like rocking the boat is the best thing for the tribe; especially when everyone else is so incompetent that they can manage to catch rabbits.  Still, the march of time is a cruel one and one day the tribe is uprooted from their idyllic homes by the war machines and mining equipment of Lord Nooth (Tom Hiddleston); leader of a nearby town that has advanced to the Bronze Age.  Through a series of convoluted missteps and slapstick humor, Dug ends up tripping falling into the Bronze Age city and even gets stuck right in the middle of their sacred arena where the mightiest warriors gather for the crowd’s amusement.  What exactly do they DO in the arena?  Fight to the death?  Feed Christians to lions?  NO!  They play SOCCER of course!  You know, that one game that everyone else calls football that we in the US only seem to care about once every four years!  Dug, seeing how much the people of this town crave the sport and treat as sacrosanct, challenges Lord Nooth and his best players to a match against him and his tribe!  If Lord Nooth wins, he can keep their homeland, but if Dug wins they get it back!  Can Dug and his tribe manage to learn how play just in time to beat the very best players the Bronze Age has to offer?  Will Dug’s new friend Goona (Maisie Williams) be the ringer they need to secure victory and will she finally get to live out her dreams of glory on the football pitch?  More importantly, can FIFA find a way to somehow turn this into an excuse to plunder a country of its riches and bully local governments!?

Now this movie is an absolute delight!  I’m not even sure how to put into words how enjoyable this film was, or more specifically in what WAYS this film was just so much fun to sit through.  It’s a weird scenario where the film is SO small in terms of ambition and scope, yet doesn’t feel restricted by that; rather being liberated to polish what it does focus on to a mirror shine.  To a certain extent, I GUESS it’s utter simplicity is a double edged sword as what few flaws are in here shine a bit brighter than they normally would, but by not getting bogged down in unnecessary subplots, uninteresting character arcs, or even having much of a message beyond DON’T TAKE PEOPLE’S STUFF and ALWAYS ROOT FOR UNDERDOGS, the movie ends up playing out like a classic farce; something that exists for its own absurdity and has no great ambitions beyond telling some rye British humor over numerous sight gags.  Maybe the film’s utter weightlessness will consign it to being a disposable and easily forgotten afterthought in the Aardman catalogue, but I certainly had more fun in this film than I had in pretty much any other I’ve seen this year; including Peter Rabbit which I’m starting to feel a lot less charitable about considering how much better this turned out.

The best thing I can probably say about this movie is that it feels like a modern update to classic EPIC comedies (or at least comedies making FUN of epics) like Life of Brian and History of the World Part 1.  Hell, the last one I can think of that MIGHT be within that vein would be Kung-Fu Hustle (though Stephen Chow’s prior film Shaolin Soccer might be the more thematically relevant to this discussion), and while this may just be the Nostalgia talking, I’m glad that SOMEONE is at least making homage to that era of films.  It’s not QUITE one of those films as the scale is still a bit too small to really be called an EPIC in its own right, but the sweeping vistas and the story of scrappy underdogs fighting against the unfeeling march of modernity does give it that sense of being about more than just the characters on screen; that this is as much a film about the era it takes place in as much as the individual people that populate it.  Similar to those films as well, it doesn’t really get bother with subplots or individual character arcs which at face value sounds like a BAD thing, but what that does is allow the writers to focus on the humor and the individual jokes instead of trying to make us care whether or not Dug goes through the Joseph Campbell heroes’ journey (not really) or trying to set up a pointless romance subplot (they don’t).  Goona as the extremely competent football player who befriends Dug isn’t driven by some tragic past and her dreams of glory aren’t a mask for some great pain that she’s trying to overcome; she just wants to play football and kick ass doing it in front of a crowd!  That’s not particularly deep, but it’s nice that we don’t have to ascribe her motivations to anything more complicated than how much fun it’d be to play in the big game.  The movie also has a great villain in the form of Lord Nooth played by a COMPLETELY unrecognizable Tom Hiddleston.  Like with the rest of the movie he’s not a character we’re supposed to take too seriously as he’s basically a PG version of King Louis XVI from History of the World Part 1 (It’s good to be the Lord!), but he really does stand out as the funniest single character in the entire movie.

Animation wise, it’s an absolute treat to watch as the clearly hand crafted clay figures (you can even see fingerprints on them) are more aesthetically pleasing to watch than the most expensive of CG effects.  Now before I get accused of being a snobby film critic, let me be clear that I don’t have a problem with CG animation; rather the aesthetic has been so overused by mid to low range studios (alongside amazing studios like Disney, Pixar, and OCCASIONALLY DreamWorks, Illumination, and Blue Sky) that simply using a different animation style is refreshing in its own right.  Not only that, but with CG being so prevalent and, to a certain extent, efficient for even smaller studios, this also means that when we DO get a movie using a different style like this or Kubo and the Two Strings, it’s not gonna be from a company looking to make a quick buck and that there’s gonna be A LOT more effort put into it; otherwise why WOULDN’T they just go with the industry standard?  Now that doesn’t mean it’s ALWAYS gonna be good (Kubo was far from my favorite movie that year), but at least with this film Aardman knocked it out of the park… or should I say… PITCH!?  I’m CERTAIN that there’s some CG going on here and there (I’m willing to bet a lot of the backgrounds were green screened), but the clear physical nature of the animation gives each movement a real weight to it that you don’t see when it’s all done with computers, and there are parts of this that I STILL can’t quite comprehend how they did!  How does the camera change focus when there are stop motion characters walking on screen!?  This isn’t really a medium that you can do a lot of takes on, so they HAD to have planned every last frame of the scene WHILE ALSO adjusting the camera lens on each and every one of them to create the smooth change in focus in the scene; and that’s me just GUESSING at how they did that!

Where the film falters is where many films like this do; namely there are a few jokes that don’t land particularly well and the thing just kind of drags a bit in the second act as we’re just preparing for the big finale.  To the film’s credit though, I’d say it’s ratio of good to bad jokes is skewed WAY higher towards good than most kids movies we’ve seen recently, and the payoff of the third act is good enough to excuse the somewhat flailing second act.  I just didn’t find Gus’s tribe all the compelling compared to the villains of the story and so spending THAT much time with them brought things down a bit too much when it needed to keep the momentum going and I was thankful every time we had an excuse to cut back to Lord Nooth.  Other than that though (and a rather weak ALL IS LOST MOMENT as we head into the third act), there’s not a whole lot to complain about here as Aardman’s unique charm really is good enough to make you overlook a bit of mediocre writing and lethargic pacing here and there.

It’s still fairly early in the year so chances are that something this light and breezy will be soon forgotten once the big guns of family entertainment start to roll out.  Heck, we’ve already got Black Panther which alone is probably gonna sweep this under the rug within a week!  Still, this is one of the best times I’ve had in a theater so far this year and I think it’s more than worth checking out even if it’s not trying that hard to think outside the box.  Sometimes you want something akin to comfort food when it comes to movies, and there’s nothing that says that easily digestible fare like this can’t ALSO be a whole lot of fun.  MAYBE it would be best to wait for this to get a home release because of that, but I had a good enough time at the theater that I think it’s still worth checking out there.  You know, AFTER seeing Black Panther.