We’re back with another episode of Scootaloo Explains It All, and while we won’t be breaking the forth wall this time around (I guess Pinkie Pie has the day off), we WILL be dealing with family problems as the one thing both her and her idol Rainbow Dash have in common is Absent Parent Syndrome!  All that’s about to come to ahead, at least for Rainbow Dash, in an episode that has been a REALLY long time coming, but can it POSSIBLY live up to the hype that has been generated over all this time!?  Let’s find out!!

The episode begins with Scootaloo doing the most Scootaloo thing imaginable (with the help of Applebloom and Sweetie Belle) by trying to launch herself straight to Cloudsdale using a makeshift slingshot.  Never mind that she’s snap her neck if she tried going THAT fast THAT quickly, there’s no way she’d have enough thrust to make it all the way to a city in the sky!  Then again, this is a land of magic horses, so maybe Newton’s Three Laws of Motion are more suggestions than outright rules.

Okay, maybe we shouldn’t be discounting Scootaloo’s genius math skills just yet.  After all, not only did she manage to make it to Cloudsdale but she lands face first to the EXACT location in the city she needed to go which is Rainbow Dash’s house.  No, not the cloud mansion where she lives now; her childhood home where her parents still live, and it only took us seven seasons to get here!  Now all we need to know is if Applejack’s parents are dead and whether Scootaloo is an orphan!

So the reason Scootaloo attempted her Evel Knievel style jump just to get to Rainbow Dash’s ancestral homestead is because she’s working on a report for school about someone who inspires her and JUST SO HAPPENED to pick… Mayor Mare.  Not really.  She chose Rainbow Dash and is trying to get some background on her childhood; yet another reason Equestria should be investing in SCIENCE instead of magic.  All I’m saying is if they had computers, she’d copy her homework off of Wikipedia like a proper student and wouldn’t have had to risk life and limb to get here!  Well since she bothered to make the journey, Rainbow Dash’s parents invite her into the house and start pampering her; presumably because they didn’t have much else planned today.

Now by this point you can start piecing together where this episode is going as Rainbow Dash’s parents (Bow Hothoof and Windy Whistles) are EXTREMELY doting and reverent to their daughter to the point of memorializing her entire life throughout the house, and it’s pretty much a reflection of Scootaloo’s personality (hence why she’s getting along with them so well), but is obviously coming off a bit uncomfortable from ponies who HAVE to be in their forties by now.  Granted, Rainbow Dash IS pretty awesome and they don’t come off as if they want to CAPITALIZE on her achievements (buy authentic Rainbow Dash baby teeth!  Only twenty bits a tooth!!), but putting someone on a pedestal does not make for a healthy relationship as it puts ENORMOUS expectations on the one being idolized.  This is probably why Rainbow Dash has yet to tell them that she became a Wonderbolt; a revelation Scootaloo stumbles upon while talking about her more recent achievements.  Guess where this ends up going? 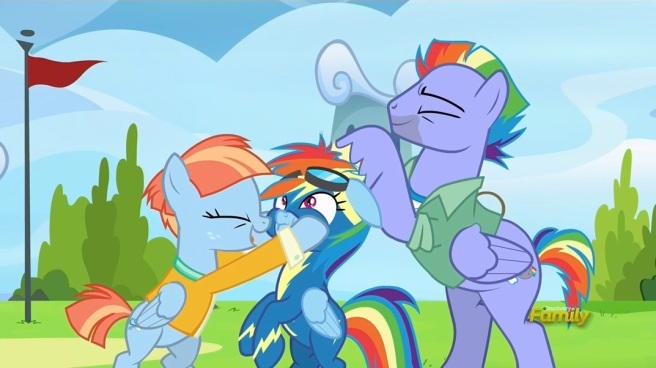 So right off the bat, these two (along with Scootaloo) completely ruin her training session with the Wonderbolts so they can whoop and holler which is a total break in protocol and none of them seem to be aware of what a position they’ve just put her in; opting to completely melt down in front of her whole team once she’s forced to go down and acknowledge their presence.  Now if there’s one thing I do like about this scene it’s the Wonderbolts themselves who seem to be aware of what’s going on and are willing to overlook the protocol infraction in exchange for giving Rainbow Dash a SUPER hard time about it.  It’s kind of like the BETTER version of what they did in Newbie Dash.  I HATED that episode for how much the Wonderbolts came across as not just jerk-wads, but being completely unaware of when enough is enough.  Here, they manage to put a cap on the ribbing and this episode is at a point where Rainbow Dash is a fully integrated member of the team which feels more appropriate as opposed to ostracizing someone just coming into the fold.  Still, Rainbow Dash knows EXACTLY what kind of Pandora’s Box Scootaloo has just opened up in her life and tries to explain why it wasn’t the best idea in the world to tell her parents about this part of her life.

Now I can only speak for myself here, but I’m completely on Rainbow Dash’s side about this as her parents don’t’ seem to show any sort of restraint or decorum when engaging in their daughter’s life which only gets further proven in the next scene as they completely go haywire at a Wonderbolt’s show.  It’s one thing to be over-enthusiastic, but it’s another to START SHOOT FIREWORKS IN THE MIDDLE OF THE ARENA!!  ARE YOU KIDDING ME!?  That’s straight up dangerous and is probably something the Wonderbolts aren’t about to overlook!

And yet, it feels like the show doesn’t quite want us to go that way with it.  They spend a good five minutes showing just how miserable her parents are making her life, and yet the moral center seems to be framed around Scootaloo who’s cheering all this on.  By the time Rainbow Dash DOES blow up at them for acting this way, it comes across like a bad guy move because of how Scootaloo ends up reacting to it.  Let’s break this down.  Rainbow Dash’s parents cause a scene at a Wonderbolt event, follow her around at Wonderbolt related events, and even cheer her on as she’s hanging up her towel in the locker room; never at any point ACTUALLY trying to engage with her as a daughter but instead treating her as some sort of infallible adoration sponge.  Now maybe she didn’t handle it the best way by blowing up at them, but she’s not the one at fault here.  She’s the one who has to deal with all this drama that she KNEW was going to happen if they found out, and at no point do her parents prove to be anything but exactly what she was expecting.  To a certain extent, fandom is a selfish pursuit as it ultimately relies on a relationship being one sided with many fans feeling an undue ownership in what they enjoy.  This is bad enough when people have to deal with unhealthy fans on social media, but imagine having that not only invade your physical space (i.e. you can’t just turn it off) and it ALSO coming from family.  Like I said, they aren’t EVIL or trying to take advantage of her, but they aren’t being good parents by acting this way and I can’t fault Rainbow Dash for reacting the way she does; unlike Scootaloo who’s just APPALLED by the way she treated her parents.

Now I would argue that Scootaloo needs to learn the same lesson that Rainbow Dash’s parents learn as she ALSO idolizes Rainbow Dash and is treating her like an object for her affection instead of as an ACTUAL pony, but the episode seems to disagree with that sentiment and instead has Rainbow Dash having to grovel her way back to Scootaloo.  Well… not exactly.  Rainbow Dash TRIES to explain pretty much what I just said above by telling her stories of her parents acting like fools during her ENTIRE childhood.  Do you remember how Rainbow Dash was bullied in Flight School?  The story here seems to indicate that SOME of that was due to her parents overenthusiastic cheering which reflected badly on Rainbow Dash (i.e. having her come across as a poor winner) which ostracized her from her peers!  Her parents CLEARLY didn’t learn anything from that, so it’s even MORE clear that Rainbow Dash was probably in the right for not telling them she became a Wonderbolt!

While this story only seemed to solidify how much Rainbow Dash was in the right (at least in terms of her issues if not so much in her tone), Scootaloo isn’t as impressed and tries to convince her that her parents were awesome and NOT embarrassing for believing in her so much.  She even confesses that her OWN parents (still no confirmation on who they are or even if they’re around RIGHT NOW) aren’t nearly as supportive and that she wished she had ones more like Rainbow Dash.  On the one hand… fine, they DID do a competent job of parenting if Rainbow Dash ACTUALLY managed to make it this far in life.  On the other hand, a guilt trip about things they did right doesn’t wash away the mistakes they’ve made back then and ESPECIALLY for the ones made recently.  Oh well.  Since Scootaloo is the arbiter of what’s right and wrong here, Rainbow Dash realizes her mistake and tries to make it up to her parents by having a private Wonderbolts show for them so they can scream as loud as they want.  Afterwards, she apologizes and they all make up.  I’ll just assume that THEY learned their lesson as well and that everything is all Hunky Dory!  Oh wait!  There’s still one more thing we all forgot about!  Scootaloo’s report!  How did THAT go!?  Eh… she got a B from Cheerilee who I’m assuming was similarly not impressed with everything that happened in this story, but it was enough for Rainbow Dash and her parents to burst in and start cheering for her.  And so the episode ends with Scootaloo getting all that attention she’s been looking for; albeit it in the middle of the school day where other ponies still need to give their reports!

It seems to be a running theme, at least for this season, that the show will have really good ideas and do a solid job of executing them, but will inevitably falter once we get to the message that’s supposed to be imparted to the younger viewers.  For the most part the problem is less the message itself as it is the nuance that it’s allowed to have, which I GUESS might work for younger viewers, but there’s also no rule that says kids shows HAVE to do the bare minimum just because they’re aimed at kids.  Would this be a less entertaining episode to the target audience if they took an extra minute to have Rainbow Dash’s parents acknowledge their own mistakes?  I find it frankly hard to believe that that would be the case, and it would have made this episode quite a bit better in my opinion.  It wasn’t a bad introduction for Rainbow Dash’s parents and I hope we see more of them in the future; hopefully in episodes where they aren’t the center of the moral dilemma.