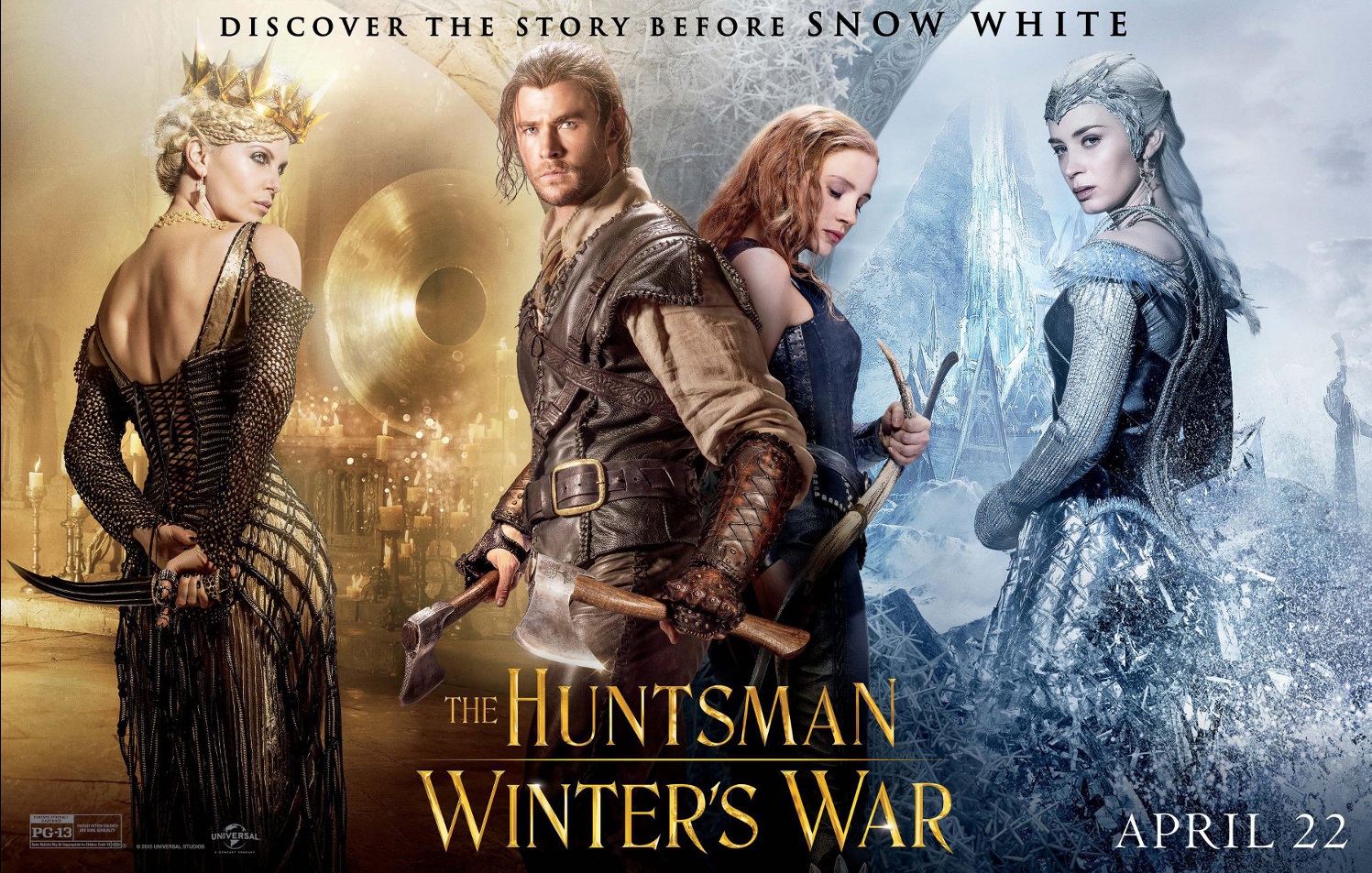 The Huntsman: Winter’s War and all the images you see in this review are owned by Universal Pictures

I really haven’t been looking forward to this.  Cutting Snow White out of a sequel to Snow White?  Yeah… no.  This exists simply because Chris Hemsworth had a weekend free between Captain America and In the Heart of the Sea.  Still, the first movie was a pretty solid fantasy film that had drop dead gorgeous designs and if nothing else that seems to have carried over here.  Not only that, but they managed to somehow get Charlize Theron back, and while the explanation will probably be dumb as hell, she WAS one of the best aspects of the first film.  Can they manage to squeeze out ONE decent sequel before driving this franchise into the dirt, or is it too late to even hope for that much?  Let’s find out!!

First of all, this movie is very much a sequel despite the advertising that states otherwise.  It STARTS as a prequel, but only to fill in the backstories for the characters who weren’t around for the first movie.  Queen Ravenna (Charlize Theron) was murdering her way through the fantasy kingdom’s royal families when her sister Freya (Emily Blunt) reveals that she is not only in love, but pregnant as well.  Despite the careful warnings of her sister, Freya goes all in on love and gets seriously burned.  Okay, well maybe SHE doesn’t get burned, but her baby does as she finds her one true love has torched the nursey with the baby inside.  Ouch.  This traumatic incident is enough to not only awaken Freya’s hidden ice powers, but to essentially make her emotionally dead and disdainful of love.  Since grief council apparently doesn’t exist in this world, she instead takes out her pain on the Northern part of the country (it’s ALWAYS in the North where things we don’t know about until later happened) where she creates her icy doom fortress and raids villages for children to raise as her Huntsmen.  Two such huntsmen are Eric (Chris Hemsworth) and Sara (Jessica Chastain) who fall in love which is strictly forbidden in the snow palace, so Sara’s killed and Eric is left for dead.  Got it?  Good.  We THEN cut to the present time (not too long after the first movie) where Snow White (who apparently is still in this except not really) has ordered the mirror mirror on the wall to be sent away where its wicked powers cannot hurt anyone.  Unfortunately, the convoy delivering it to some vaguely defined sacred place never reached their destination so she requests the huntsman to go out there, find the damn thing, and finish delivering it before it can fall into the wrong hands.  Say… those of the Ice Queen?  He heads out on the journey with Nion and Gryff (Nick Frost and Rob Brydon) who are two dwarves (one of whom is from the first movie) and try to figure out just what the hell happened to the mirror and the convey.   But wait!  Not all is as it seems as Eric is soon confronted with Sara who somehow is still alive and super pissed!  How did she manage to recover from being murdered?  Will this little posse of fantasy bad asses be able to find the mirror before it’s too late?  Just how blatantly are they ripping off Frozen in this!? 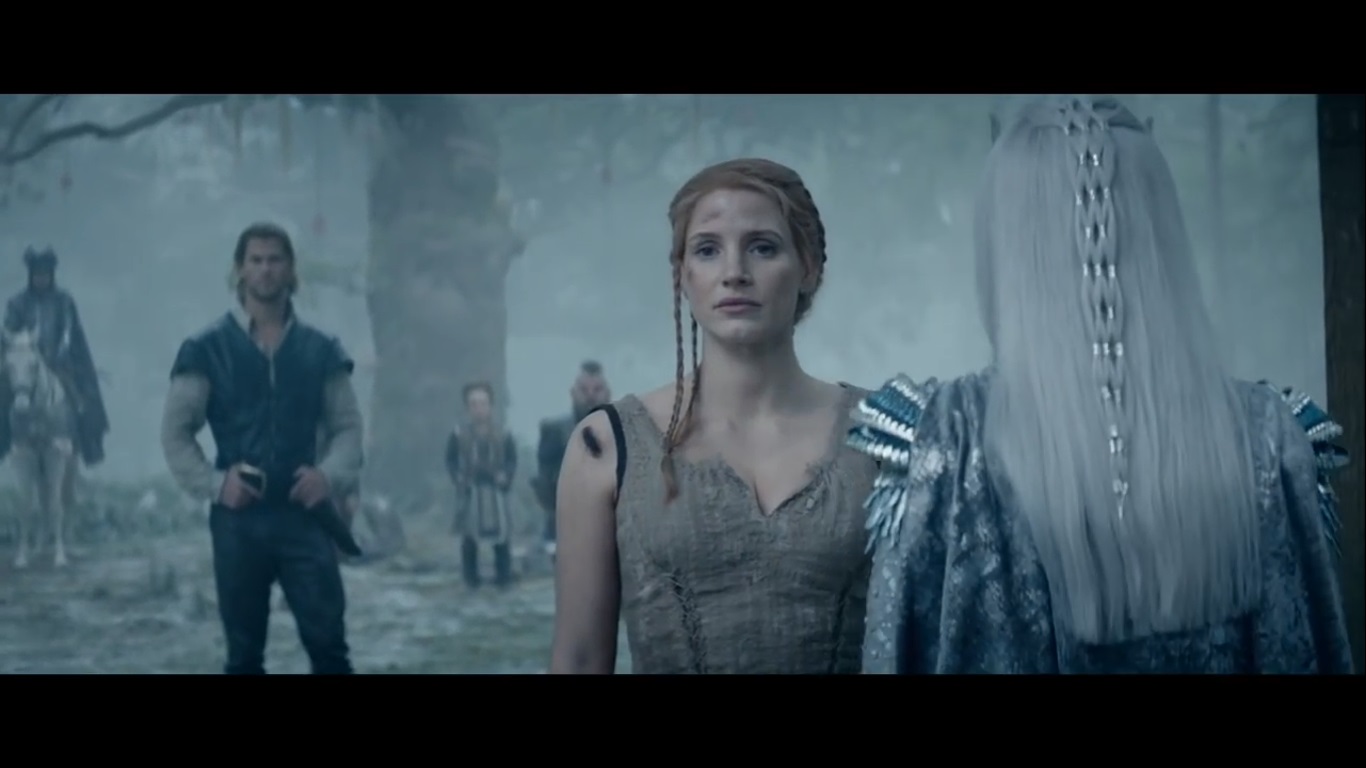 This movie is dumb as hell but is also brilliant, and I think I like it more than the first one.  There’s so much fun to be had here from Chris Hemsworth’s toothy grin and winking eye, to the side characters that are all fully realized and most of who are absolutely hilarious.  The trailers do an AWFUL job of selling this movie (the fact that it’s hard to tell that this is ACTUALLY a sequel should be damning enough) which is a shame because this feels like a cult classic in the making what with its campy tone, beautiful sets and costuming, and crazy performances by great actors.  It has a rough start and there are flaws throughout, but this is straight up fun, old school, sword and sorcery adventuring that we haven’t really seen since the eighties.  They spent a hundred and fifteen MILLION dollars to remake Red Sonja, and while there’s no way they’ll get their money back, the resulting film is an admirable effort in shlock-tastic filmmaking.

It does take a while for the movie to find its stride as the first act of this is frankly uninspired.  We get the backstory on Ravenna and her sister Freya (playing Elsa from Frozen by way of a subdued Eddie Redmayne from Jupiter Ascending) which plants the seed for the most obvious and telegraphed plot twist imaginable (Spoiler Alert: That way too obvious to be true twist is in fact the twist), and then twenty minutes devoted to Eric the Huntsman’s backstory which is cliché ridden and not particularly interesting.  We get to know so little about this guy and his soon to be wife other than that they apparently spend all their time hitting things with axes or shooting arrows at things that it feels unnecessarily drawn out to get their very characterizations across.  I will give it this though, even if that whole section where we learn about the Ice Queen’s kingdom and the Huntsmen Corps is lame, it does have a lot of planting for later payoffs that work which helps flesh out the story once it really does go into high gear.  The biggest problem in this film though is when we do go from prequel to sequel and we’re shown exactly what managed to survive the transition from the first film to this one.  I HATE the fact that Snow White has been removed from her own movie (probably as punishment for Kristin Stewart’s affair with the director which, if true, is pretty damn despicable of the studio) and the way they dance around the issue is painful to watch.  They don’t deny that Snow White still exists here, but she only does so as a presence and not as a character.  She’s talked about as if she’s someone influential and important, but none of the events here have anything to do with that character.  Not only that, but the only other first movie characters on hand are the prince who is a glorified cameo (he tells Hemsworth that the Queen wants him to find the mirror) and Nick Frost as the only one of the seven dwarves to show back up with a brother of his who was NOT one of the aforementioned seven.

Still, if you can get past that and pay enough attention to understand the character dynamics and not-so-subtle clues planted, the movie becomes an absolute BLAST in the second act.  Jessica Chatain enters the picture again and the explanation for her return is not only clever, but creates some genuine drama between her and Hemsworth which is more than I would have expected from this movie.  Frankly, her no nonsense (i.e. no characterization) portrayal in the first act is what I thought she’d end up being throughout, but thankfully she has a bit more depth to her.  There are also four dwarves in this that steal every scene they’re in; Nick Frost and Rob Brydon as mentioned earlier, and two female dwarves they meet along the way.  Alexandra Roach plays Doreena who is fine enough and gives Nick Frost something to do as the two of them become love interests, but the one who REALLY stands out and is the true star of this movie is Sheridan Smith as Mrs Bromwyn.  She’s quick witted and doesn’t take shit from anyone but is still fair and loyal to her friends, especially Doreena.  I’m absolutely gung ho for a sequel to this on the sole condition that it’s a spinoff about Mrs Bromwyn being awesome, snarky, and bad ass!  MAKE IT HAPPEN UNIVERSAL!!

Everyone brings their cheesiest A game here, especially Charlize Theron as the dead (but only sort of) Queen Ravenna from the last movie; screaming her head off, hamming it up to the nines, and still managing to craft a reasonably nuanced performance out of it all.  Emily Blunt has it a bit tougher though as she can’t be as in your face with her performance, so she comes off much more subdued in a movie that’s brimming with personality.  Still, she manages to pull of the dramatic moments for her character and the sheer spectacle of her powers means she’s never boring when on screen.  The two of them work very well together, and while I was annoyed that THE TWIST as it were between them was so obviously telegraphed AND weakened the Queen’s character by making her that much more cartoonishly villainous, it was at least handled well which dulled the impact of the stupid decision there.

There are some shortcomings here, and it’s not just the first act.  The Ice Queen’s law against love is a really stupid conceit that is present throughout the entire movie.  Granted, its purpose is to cut out the middle man of making up some OTHER bullshit excuse for Eric and Sara to rebel, but it just raises all sorts of questions.  Does she distinguish between loyalty for her and love for her?  If someone gets TOO loyal, does she have to shove an icicle in their face?  What about sex?  Is sex allowed as long as you don’t love the person?  Would that mean that the ice village has a booming economy based on prostitution?  I really shouldn’t be going down these kinds of tangents when I’m supposed to be focusing on the story, but it’s one of those really obviously dumb things that ended up being a distraction.  On the technical end of things, the CG on monsters are pretty poorly animated, especially from the Goblins who do not move convincingly AT ALL, and the action is guilty of the three cardinal sins of fight scenes; shaky cam, close ups, and quick cuts.  Oddly enough, they manage to fix (or at least significantly lessen) all three of these issues by the ending fight scene which begs the question as to why they couldn’t figure that out in the earlier scenes!  It’s not the WORST offender of this kind of weak action, but it doesn’t help the movie and dampens my enjoyment a bit.

In the middle of this movie is a really fun adventure film in the vein of Beastmaster or Conan the Barbarian which is something we very rarely get nowadays.  Lord of the Rings changed everything and in the wake of it, the few fantasy movies that have come out since then are trying to ape that aesthetic.  This movie has a very unique look to it that distinguishes it from pretty much everything else out there, and it manages to find time to have fun with the premise and characters.  It’s by no means perfect and I’ll probably be in the minority of those who really enjoyed this, but for me this was a fantastic experience at the theater and I absolutely recommend that you go out and give it a shot.  If nothing else, we need to support this so the dwarves can get their own movie!

One thought on “Cinema Dispatch: The Huntsman: Winter’s War”