If the internet wasn’t already bad enough for you, the announcement of a Ghostbusters movie with a female cast should have been enough to put it over the edge.  For reasons that are bafflingly petty, there are still a number of dumbasses who hated this movie just on principal.  The principal that… what, women suck?  I don’t know and frankly I don’t want to know.  This trailer though is the first chance that many of us will have to form an ACTUAL opinion on it rather than get blindly angry at it for no good god damn reason.  Does the trailers assuage the fears of those who legitimately had some hesitations for this, or will this be a complete mess of a reboot like… eighty percent of other reboots are?  Let’s find out!!

The trailer begins with that most sacred of reboot traditions; softly playing the original film’s theme over establishing shots that are accompanied by trailer text.  The text by the way is somewhat misleading as it references the original film (thirty years ago, four scientists saved New York) despite nothing else in here indicating that the Ghostbusters existed prior to the events depicted here (an actual reboot instead of a pseudo sequel).  The trailer proper is all about the origin of these four people coming together and as well as creating their equipment, though this could all just be some VERY creative editing on the marketing department’s part to hide anything that indicate them not being the first crew to carry the name.  I really hope that this IS a full on reboot though because having the original movie or the original cast be a presence here is just going to overshadow who the real stars of the movie are.  Speaking of which…

Furthering the idea that this is not a sequel is that the first time we see the original three Ghostbusters (Leslie Jones isn’t too far behind) is very reminiscent of the library scene from the first movie, what with an unassuming female ghost going all spooky face on them when they try to engage with her.  This one gets a bit more messy though as the movie has no compunctions about throwing Ghostbusters iconography in your (and the character’s) face as Kristin Wiig gets a slime hose shoved right in her direction.  The rest of the trailer covers the basics of the premise, letting us know that this is going to follow the first one’s setup very closely with some minor differences here and there.  They are no longer working out of an abandoned fire station and are instead renting a space above a Chinese restaurant, and the costumes and weaponry in particular have been updated and (in my opinion) improved up; especially Melissa McCarthy’s ecto-blasting science knuckles.

None of the characters here fit precisely with any of the original crew which is a good decision to distinguish this from the other films, though if you try hard enough you can get them to fit the molds.  Abby Yates (Melissa McCarthy) seems to the taking the Bill Murray role though without his particular brand of smarminess, Jillian Holtzmann (Kate McKinnon) comes across as a combination of Egon from the other movies and Rick from Rick and Morty, and Erin Gilbert (Kristen Wiig) looks to be the Aykroyd here, though she plays it very differently from him.  There’s one more person we need to talk about and unfortunately this is where the trailer kind of loses me a bit and will probably lose a lot of people.  Leslie Jones plays Patty Tolan and unfortunately, either for nostalgic reasons or for lousy screenplay reasons (probably both), she’s the only one of the three who isn’t a scientist or technician; just like Ernie Hudson was in the original films.  Once again, people of color are given roles that are meant to be less intelligent and portrayed as ghetto (“You guys are really smart about this science stuff, but I know New York”) which still happens because… reasons.  Seriously, would it have been THAT much harder to make her a scientist too?  If they want to reboot the movie, than maybe some of the stuff that was a problem in the original (Winston Zeddmore was originally written to be a fighter pilot who was in on the endeavor from the ground floor) shouldn’t be carried over.  Now to back pedal a bit and give the movie credit, it seems like they made SOME improvements here.  First of all, Patty appears to be a part of the crew while they’re still starting up, and she’s even the one to provide the car that will become the ECTO-1.  That is definitely something to be happy about as she seems to have a very integral part to play in the movie rather than just filling out the fourth uniform.  Also, while the trailer in no way touches upon this she’s supposedly a Municipal Historian according to a tweet from Sony Pictures UK.

From what I could find about New York Local Historians, it’s not something you can easily become as they require a bachelor’s degree in American History or some related field in order to even be considered for such a position, and there are only about 1,640 of them in a state with a population of nearly twenty million.  If this is true about the character (I’ve only found the one tweet to verify it), then that’s certainly something they should be pushing to the forefront of the advertising considering the impression the trailer gives off about her character and the franchise’s already sketchy history in regards to Ernie Hudson.  Hopefully the movie will handle Patty’s character MUCH better than the trailers suggest they will because some of the scenes she has in this are gut bustingly funny.

Moving back into something that’s positive about the trailer, there’s a concerted effort here to bring a female gaze to the material which is the best way to address the gender swapping of the lead characters.  The best example of this has to be the scene where Chris Hemsworth simply walks down a hallway silently.  At first, it seems awkward to have such a prominent actor do so little in the first trailer for a movie they wish to sell to such a wide audience.  That is until you realize that this shot is in every crappy (and a lot of not so crappy) action movie trailers where the female character has nothing to do but look hot and walk towards the camera.  This inversion of standard movie tropes will hopefully be a huge source of humor and inspiration for the movie itself, and it’s the right kind of way to address the gender change (making it not irrelevant) without going to the point of their gender becoming a joke in and of itself.

So after all that, what do I think about the movie?  I love everything they’re doing here from the casting and props (though some of the effects aren’t fantastic) to the humor these actors bring to the material.  There’s not much to go on in terms of story (Someone is creating a device that amplifies paranormal activity) but the goal of this trailer wasn’t really to sell the script as much as it was to sell us on these new actors taking up the mantel that’s been collecting dust for over twenty-five years.  To me, they not only did that, but it also has the potential to do what Star Wars did which was to give us something we love but modernize it and show that it can still work in today’s world, no matter how much the purist naysayers complain about the lack of penises on display.  There are issues to iron out (Patty needs to be more prominent and better represented), but hopefully those are due to the trailer itself and not a reflection of the film.  Also, Jillian Holtzmann is my new role model for all things. 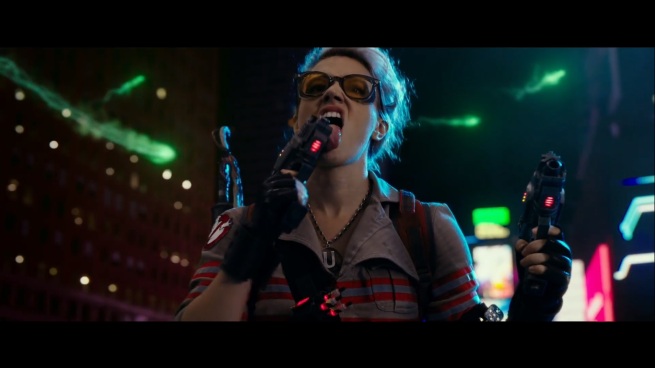 I really hope this movie is at least as good as this trailer sells it be and so much more.  We’ll have to wait until July 15 to find out.