Ugh… School work is piling up, and having so little free time has sapped my motivation to write an Equestria Uncovered on a weekly (or even monthly) basis.  If only there was something happening soon to reinvigorate my passion for writing about ponies.

While I’m going to discuss My Little Porny: Fucking is Magic (no really; that’s what they’re calling it), I’d like to use this as a jumping off point for discussing the clopping community in general.  Who knows!  Maybe we’ll all learn a little bit about ourselves in the process!  That or we’ll end up feeling REALLY awkward by the end.

Oh and FYI, while I’m hoping the above image will be the most inappropriate, I will be posting censored pictures of the film, as well as some censored images of clop.  In any case, even though I’m cutting out the nudity, I’d consider this NSFW.

Let’s start with a little bit of history.  Earlier this year, Pixel Vixens (a pornographic cosplay group) started a campaign on the adult crowd funding site Offbeatr.  The goal of the project was to use the raised funds to produce an adult film, and the people who gave money to the project were able to vote on what the subject would be.  Needless to say, MLP won by a landslide and the DVD will be available in a few weeks.  Production stills as well as a NSFW preview have been released, and the story seems to be that Twilight has R63’d herself (either that or Discord did it; it’s hard to hear what anyone is saying) which leads to him/her boning the rest of the cast.  Having seen the preview, it’s clear that a lot of work went into the costumes; which isn’t surprising considering that it’s their specialty.

What isn’t as good is the audio quality (which they have admitted is an issue and will hopefully fix by the time the DVD gets released), and the sets which range from outside to a kitchen to a “barn”.

I haven’t seen much of their work considering that they run a pay site, but judging by the quality of the video preview, it seems like they don’t have much experience making a movie whose content goes beyond filming their models having sex.  It’s one thing to film someone in a static location without much need for clear audio quality (moans don’t require a boom mic operator) but to do something on a more professional level, the filmmaking seems a bit amateurish.  Still, even if they didn’t have the best resources, they did do a lot to capture the essence of these characters and to give shout outs to certain running gags from the show.  Call me cautiously optimistic about the whole thing, assuming of course they make good on their promise to fix the audio issues. 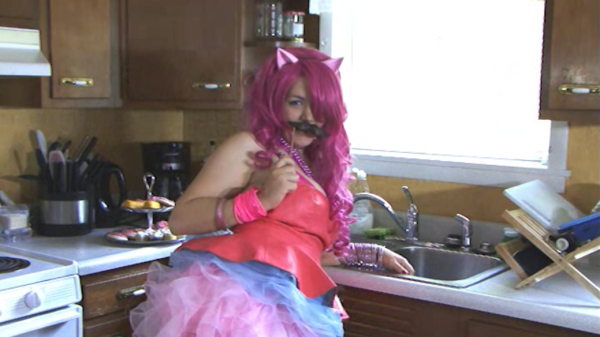 For starters, cosplay pornography is nothing new.  Not only has Pixel Vixens made a career out of it, but there are several others out there doing the same.

Not only that, the “mainstream” pornographic industry has been dominated by parodies of popular licenses for years now, some of which are much stranger than others.

In a pre-internet world, there were not a lot of feasible outlets for fans of niche properties to get together and have their voices heard by the greater culture at large.  This is why so much of entertainment up until the early 90s was very homogeneous.  Were there exceptions?  Sure.  Star Trek was popular enough in it’s time to more or less invent the idea of fan conventions, and Star Wars changed the whole entertainment industry with its use of classic genre tropes and more or less inventing the summer blockbuster.  However, despite genre successes like these, there was still no way for more niche audiences to be a viable market force, at least on a nationwide scale.

With the internet being able to connect people all over the world, and being able to provide an international market place, niche audiences are now able to interact and meet in ways they never could before, and prove that were more than willing to provide companies with as much disposable income as they could muster to whoever was willing to cater to them.  Hence, we’ve had the fragmentation of the global entertainment marketplace that has allowed genre, animation, and other smaller groups to be viable audience for companies to pay attention to.  This has led to the increase in movies based on comic books, anime being dubbed and sold in the US, and yes, pornography for anything and everything that people are looking for.

This leads us inevitably to Cloppers.  As far as I’m concerned, the clop community is completely harmless and should be accepted as much as any adult community within a specific fandom.  Anyone claiming that they are doing some sort of harm or are worthy of scorn are just bullies looking for someone they can harass with impunity.  If you’ll indulge me for a second, which of these is the bigger threat: A private website that Cloppers can get together, role play, and share pictures (among other such actives), or the hackers who threatened to release all the members’ private information if the site isn’t shut down?

Look, I don’t give a shit if you hold a deep hatred for those who jerk off to porn based on a children’s cartoon show.  That’s fine, because it’s not my problem (or anyone else’s) what you think.  I start to have a problem when you take actions against people who you’ve never met, but have formed a lousy opinion of that makes them deserving of your righteous actions.  “Oh thank you brave warrior for fighting against the pervs in this world.  Truly your actions will show them the way to normality and true happiness. HAZA HAZA!!!!”  I’m not saying everyone who doesn’t like cloppers would support these actions, but this is the kind of thing that spewing hatred can lead to.

Thankfully, it seems that most of the other Bronies out there have mellowed out when it comes to this and just sees it as something that exists but doesn’t affect their love of the show or the community at large.  Despite Howard Stern’s “Exposé” from over a year ago, people outside the fandom have generally stopped caring as well.  There aren’t people banging their heads against the wall trying to stop dudes from jerking off to ponies, they’re using they’re time trying (AND FAILING) to stop gay marriage from becoming legal.

Well that was a bit of detour.  I’m hoping that I was at least SOMEWHAT insightful when talking about smut.  Think I’m just a perv ?  Obviously.  Let me know what you think in the comments below!

My Little Porny: Fucking is Magic by Pixel Vixens

Rule 34 from Know Your Meme