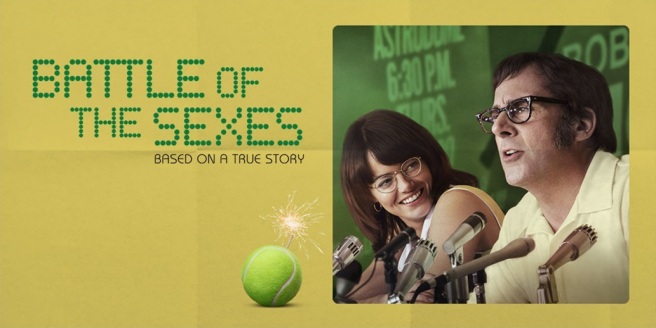 Well THIS is certainly a pleasant surprise!  I may not know all the details, but I’m certainly aware of the tennis match between Billie Jean King and Robbie Riggs which has always stuck with me despite only knowing about it by watching the back half of a TV documentary around fifteen years ago.  I’ve always liked tennis as a sport and the build up to the phenomenal match was ridiculous and felt like a flash in the pan moment in history which did end up having a big impact on everything simply for how much confident men were that she was gonna lose and then had that whole perception shattered on live television around the world.  Is there any way that a film can do justice to this once in a lifetime event and remind us all of how important this was in the first place?  Let’s find out!!

The movie is about the infamous match between world renowned tennis player Billie Jean King (Emma Stone) and world renowned FORMER tennis player Bobby Riggs (Steve Carell) which was played up in the media as THE BATTLE OF THE SEXES and the match that would once and for all prove that women have no business competing in MAN PLACES like tennis; something that wasn’t helped by Riggs’s absurdly derogatory and over the top chauvinistic stunts.  Of course, there was a lot more to the story than the over the top theatrics leading up to it which includes the establishment of the Women’s Tennis Association, Billie Jean’s romantic relationship with another woman Marilyn Barnett (Andrea Riseborough), and even Bobby Riggs’s financial woes that may have been the driving force for setting up this match in the first place.  So much was on the line for Billie Jean to succeed, yet with so much working against her, it was quickly becoming a task that seemed impossible to overcome.  Would she be able to find the strength to overcome the odds and prove herself once and for all?  How will she be able to maintain a relationship with another woman in a time when that was much more frowned upon and life destroying than it is today?  How can one person navigate all this nonsense being constantly thrown at them and STILL manage to keep from knocking all these jerkwads upside the head!?