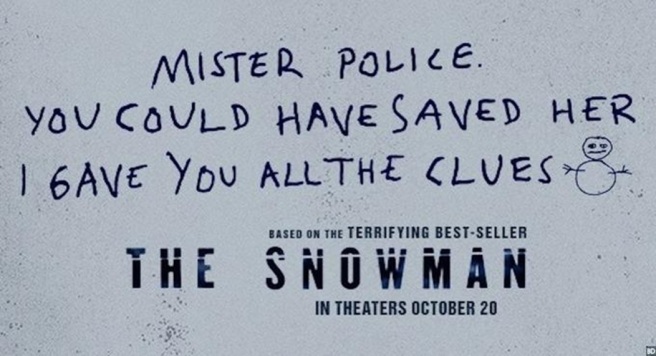 Is anyone else super excited to see this movie?  There’s something innately appealing about a serial killer movie, as morbid as that sounds, mostly because I feel they’re one of the purest forms of a Good Guy vs Bad Guy story that pits two characters against each other in a battle of wits to see who comes out on top!  Face/Off, Death Note, Silence of the Lambs, Sherlock; the list goes on and on and I always find them to be at least somewhat enjoyable… though I have never seen that Alex Cross movie which I hear is so bad it’d probably ruin the whole genre for me.  At least this movie looks better than THAT film did and from the trailers it looks like a rather interesting murder mystery with a neat little gimmick for the killer that certainly sets them apart from your typical slasher.  Will this be another great film to add to the list, or will all the hopes I had for this melt into a sad little puddle like a snowman left in the sun for far too long?  Let’s find out!!

The movie follows the adventure of the hilariously named Detective Harry Hole (Michael Fassbender) and if you think that’s just a poor translation; the writer of the book this is based on ALSO wrote a book called Doctor Proctor’s Fart Powder.  Anyway, Detective Hole is a complete and utter wreck when we catch up with him as he’s constantly drinking and sleeping on park benches despite the fact that he’s supposedly a legendary detective who’s solved all sorts of difficult cases… I think. The latest mystery he’s tasked to solve is a series of disappearances which may end up being homicides and he’s got a fresh new detective out of the academy named Katrine Bratt (Rebecca Ferguson) to help and/or annoy him as he tries to find a connection between them.  I’m not sure if he figures out that the connection is a snowman being built in front of the home of each victim (the movie is rather bad at conveying information) but that seems to be the killer’s signature; hence the title.  Detective Hole has to get to the bottom of this case soon; not only to save whoever the killer’s next victim is, but because the killer seems to have taken a liking to the drunk detective and may be targeting him or his loved ones soon if he can’t catch him first.  Can Detective Hole figure out who’s been kidnapping these people and cutting them to pieces; despite his hilarious name?  Doe these recent kidnappings have anything to do with a case from six years ago that was led by Detective Gert Rafto (Val Kilmer) who died under mysterious circumstances?  Seriously, did anyone read the script to this before filming?  Were there pages missing or did someone ACTUALLY think that this all made sense?