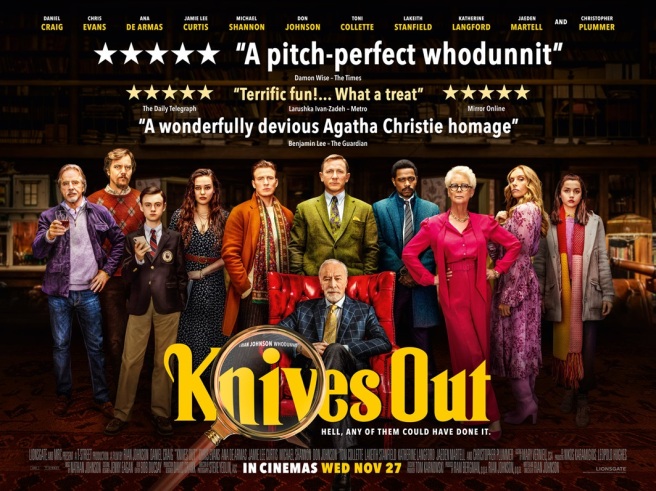 I gotta tell you, I was in LOVE with this movie from the very first trailer!  Seeing great actors like Michale Shannon, Toni Collette, and Daniel Craig, on screen with Captain America in a movie from the Last Jedi guy, AND it’s a juicy as heck murder mystery?  What more could one person ask for!?  Even with the best of trailers however, there’s always a possibility that what we saw was a cleaned up version of the best bits while the finished product is a compromised and messy waste of time; the Suicide Squad approach if you will.  Can Rian Johnson prove once again how great of a filmmaker he is despite how… “controversial” his last film was, or is this just more fuel to the fire for the more obnoxious anti-fans of The Last Jedi?  Let’s find out!!

The morning after the eighty-fifth birthday of famed mystery novelist Harlan Thrombey (Christopher Plummer), he is found dead by his nurse Marta Cabrera (Ana De Anmas) with this throat slashed open by a knife, and because of his massive wealth and greedy family members it only makes sense to investigate things a bit further despite it looking like a suicide.  Not only that, famed detective Benoit Blanc (Daniel Craig) with his rich southern accent was brought in to investigate by a mysterious correspondent who sent him no identifying information but a wad of cash to find out if there was foul play or not.  His entire family was in attendance the night before and most of them stayed the night in the giant and ridiculously furnished mansion complete with a giant display of knives that looks like a rejected Game of Thrones prop, so there was plenty of opportunity for someone to get the drop on him and possibly make it look like a suicide.  The suspects include his children Linda and Walt (Jamie Lee Curtis and Michael Shannon), his children in-law Richard and Joni (Don Johnson and Toni Collette), and his grandchildren Hugh, Meg, and Jacob (Chirs Evans, Katherine Langford, and Jaeden Martell); all of whom are bizarre in their own way, but hardly seem to be the types to kill unless VERY highly motivated.  The key here is not finding the right method or the most capable suspect, but who had the most REASON to kill, and chance are it has to do with money as Harlan seems to have upset quite a few people at the party last night, though everyone is staying rather tight lipped about it.  Can Detective Blanc find the truth among all the lies, misdirection, and self-serving half-truths?  Which member of this eclectic family has the most to gain now that Harlan is gone, and who has the most to hide?  Is the big twist at the end that Detective Blanc was ACTUALLY Joe Bang in disguise this entire time!?

END_OF_DOCUMENT_TOKEN_TO_BE_REPLACED

You know… I’m starting to feel like the old man yelling at clouds.  For whatever reason, THIS kind of horror film (mostly put out by A24) is the new hotness in horror and I just can’t understand it.  I’ve sat through far too many weighty and slow paced exercises in excessive cruelty that still manage to get critical acclaim, and I just can’t understand it.  Now they had to make one of these with one of my favorite actresses which means I HAVE to go see it even if it’s probably gonna be more of the same.  GREAT!  I LOVE sitting through things that ruin my day, don’t you!?  Anyway, will this be the one that manages to be thoughtful, interesting, and GOOD instead of just provocative for the sake of pretension, or will this be yet another film I’ll want to bury in the backyard with cement so that even if it comes back as a zombie it’s not going anywhere?  Let’s find out!!

Annie Graham (Toni Collette) is a mother of two who just lost her own mother and is having trouble coping with the loss; mostly by repressing her feelings, but also because her mother was a… shall we say COMPLICATED person, and whatever secrets Annie is dealing with are not something she’s ready to share with everyone else.  Unfortunately her daughter Charlie (Milly Shapiro) had a particular attachment to her and is lashing out in her own way which is only bringing more and stress onto the family.  Her husband’s pretty cool with it though (Gabriel Byrne) as he’s a PEACE KEEPER who really just floats in and out of situations trying to cause as little fuss as possible, and their son Peter (Alex Wolff) is well on his way to being an emotionally repressed mess of his own, though that might just be the teenage angst talking.  Anyway… let’s just say that things get PRETTY bad from there as the death of Annie’s mother turns out to be the LEAST of their problems as… things get pretty bad from there.  Annie’s slowly unraveling from the stress and the guilt of… whatever happens, and it’s tearing the entire family apart; especially Peter who… let’s just say isn’t quite equipped to deal with all this.  With so much chaos at home and very little support outside of it other than Annie’s friend Joan (Ann Dowd), will this family manage to get past this… very bad thing that happened, and come together as a functional family?  How much hardships, horror, and emotional scarring will they have to go through for even a hope of surviving… whatever this is?  Why… you know what, just why.  WHY!?

END_OF_DOCUMENT_TOKEN_TO_BE_REPLACED

I know I’ve SEEN the first xXx movie, but the only things I can recall are a fake diner, non-lethal bullets with fake blood in them, and a bunch of scientist being killed by the bad guys because reasons.  Needless to say that it didn’t leave much of an impression on me considering how poorly I can recall it as well as the fact that I never felt the need to go back and rewatch it.  Still, what with The Fast and the Furious becoming the most popular international franchise outside of Marvel, they obviously had to milk this franchise again; something that didn’t seem to go well the last time they did it with Ice Cube, but I guess now that XANDER CAGE is back, we can take one more swing at it!  Does the return of Vin Diesel breathe new life into a franchise that’s been comatose for over a decade, or is this just one big Weekend at Bernie’s scheme gone even worse than any of us could imagine?  Let’s find out!!

The movie opens up with NSA Agent Augustus Eugene Gibbons (Samuel L Jackson), who I guess was in the first movie, trying to recruit some football player (as in Soccer) to be a member of xXx, though I’m not sure if that’s a title, the name of the organization, or both.  It doesn’t really matter though because both he and the football player (Neymar) are killed by a satellite that drops out of the sky.  Normally these burn up on reentry LONG before they could really cause THAT kind of damage on the ground, but this is no the movie to be asking those kinds of questions in.  The more important question is… WHO’S RESPONSIBLE!?  Well, government operative Jane Marke (Toni Collette) seems to have an idea of HOW if not exactly WHO as the government JUST SO HAPPENS to have some sort of box that serves NO OTHER PURPOSE than to drop satellites from the sky.  Okay… well the box is stolen by a bunch of badasses (Donnie Yen, Deepika Padukone, Tony Jaa, and Michael Bisping) which means the government has to find an EQUALLY badass person to hunt them down; namely Xander Cage (Vin Diesel).  It doesn’t take long for Jane to recruit him for the mission, and he brings along a crew of people with a certain set of skills to help him out.  Adele the sniper (Ruby Rose), Tennyson the stunt driver (Rory McCann),a nd of course Nicks the DJ (Kris Wu) because apparently you need one of those for this kind of mission.  Can this rag tag crew of Gatorade chugging XTREME athletes save the world before the OTHER Gatorade chugging XTREME athletes destroy it?  What was the government planning to do with that ridiculously specific doomsday device anyway?  Most importantly, does Vin Diesel look cool in this?

END_OF_DOCUMENT_TOKEN_TO_BE_REPLACED

There really hasn’t been a good Christmas horror movie since Gremlins, has there?  I’ve heard good things about Rare Exports, but that didn’t even get a decent sized theater release here in the US.  That’s all about to change… maybe, with this horror film about the holiday season’s canonical version of The Grinch!  It certainly has an uphill battle considering how hard it is to walk that line between scary and being hilarious (intentionally anyway) but there’s some strong talent behind this film so there’s a good chance they can actually pull it off!  Will this movie manage to be a fun horror comedy that becomes a holiday staple, or is this a giant piece of cinematic coal that we’re being punished with for giving War Room so much money?  Let’s find out!!

The movie is about a family who gets together on Christmas despite the fact that no one likes anyone.  You’ve got Tom and Sarah (Adam Scott and Toni Collette) who are the parents of Beth and Max (Stefania LaVie Owen and Emjay Anthony) and they’re playing host to Toni’s sister Linda (Allison Tolman), her husband Howard (David Koechner), and their three kids Stevie, Jordan, and Howie Jr (Lolo Owen, Queenie Samuel, and Maverick Flack).  Oh, and there’s a baby in there somewhere along with bitter sardonic Aunt Dorothy (Conchata Ferrell).  Wait, am I forgetting anyone?  THAT’S RIGHT!!  Tom’s mother Omi (Krista Sadler) who will play Miss Exposition here as she knows ALL about Krampus yet doesn’t tell the family until well after the shit has hit the fan.  Anyway, as you’d expect around the holidays, tensions flare up and there’s a huge fight that causes young Max to finally give up on the Christmas spirit.  This decision makes completely responsible for what happens next and the deaths of whichever loved ones get caught in the crossfire.  A huge storm rolls in that cuts off this neighborhood from the rest of the world and takes out the power and cell phone towers.  There’s something else out there though and the family soon finds themselves besieged by Gremlins knock offs, snow monsters, and a really fucked up Jack in the Box before Krampus finally shows up to deal with this family himself.  Can they survived Yuletide massacre long enough to open their presents?  Will Max be forever haunted by the fact that his sadness (which is something that’s REALLY outside of his control) is the root cause of all this horrifying shit being rained upon them?  Is it at least as good as Santa’s Slay!?