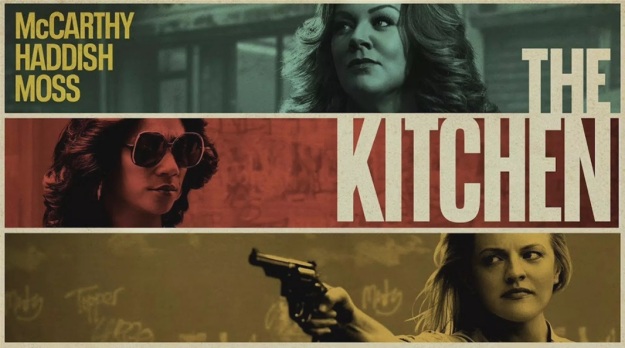 Oh, now who doesn’t love a good period crime movie?  We’re over a hundred years into the medium and mobsters have outlived cowboys, pirates, and musicals which, now that I think about it, would make an interesting For Honor sequel.  I’ll have to pitch that Ubisoft at some point, but which I mean send an overly enthusiastic tweet.  ANYWAY!  What caught my attention about this movie right off the bat is the cast which stars the one and only Melissa McCarthy alongside Tiffany Haddish who’s become one of the most recognizable names in movies, and yet despite two of the biggest names in Hollywood right now (as well as Elizabeth Moss who’s great as well), this hasn’t gotten a whole lot of advertisement from the studio or buzz from the critics.  Is this a hidden gem that everyone else but me managed to overlook, or is this a disaster that everyone was desperate to hide?  Let’s find out!!

Kathy, Ruby, and Claire (Melissa McCarthy, Tiffany Haddish, and Elisabeth Moss) are the wives of three members of the Irish Mob back in the late seventies who are sent to jail after a robbery gone bad and they’re left to fend for themselves despite the promises that the mob will protect them financially until their husbands get out.  With nothing to fall back on, a lousy economy, and two kids to take care of, Kathy decides that they should pick up the slack that the current mob boss Little Jackie (Myk Watford) has left during his ineffectual run at the top.  She, Ruby, and Claire start to collect protection money, solves problems for local businesses, and even starts to recruit a few of the guys to their side including Gabriel (Domhnall Gleeson) who has just returned to New York after a seemingly shady departure and is looking to sow himself back into the community.  Seems like they were just what this organization needed to thrive, but with every opportunity they grab and every inch of power they accrue, it only paints a bigger target on their back as more and more people start to get jealous of how much these house wives have managed to show them up.  Not only that, but their husbands will only be in prison for so long, so what’s gonna happen when they get out and try to reassert themselves as the head of their respective families as well as the organization itself?  Can this trio survive in a world full of death, violence, and hard decisions?  What kind of attention will they attract from outside interests, and will they see an opportunity to destroy the Irish mob or worthy foes to make peace with?  Anyone else not surprised that Melissa McCarthy is great as a cold blooded killer?

Interesting direction for a sequel to The Heat, but I guess if you’re gonna make it… YOU MIGHT AS WELL DO IT IN THE KITCHEN!!  HA HA!!