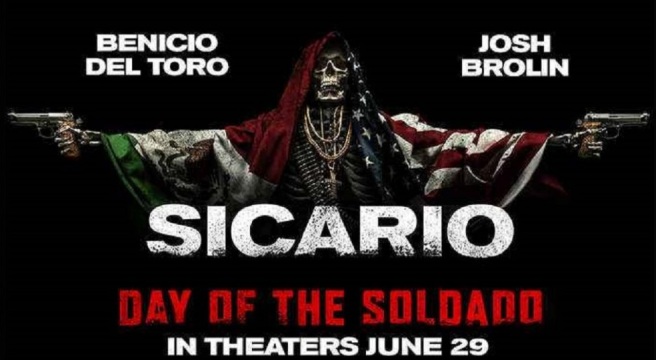 Sicario: Day of the Soldado and all the images you see in this review are owned by Columbia Pictures

You know what I thought when I got out of the first movie?  This is PRIME material for a franchise!  Yeah, the first Sicario was a dark journey through the worst aspects of the War on Drugs which felt REALLY complete as a story, but after it made a boat load at the box office the studio couldn’t help itself from squeezing as much money out of this cash cow as they could which HOPEFULLY means we’ll get a crossover with The Fast and the Furious franchise, but until then we’ll have to get stuck with more straightforward entries of vastly diminishing returns.  Okay, that’s a little unfair.  After all, it’s not like you COULDN’T make another movie with this cast, and the premise seems like a great starting point to bring up issues surrounding immigration and border patrol that have only become more exacerbated since the last film came out!  Wishful thinking I suppose, but you’ve gotta have SOME amount of hope, right!?  Will this be a great and topical sequel to an already fantastic movie, or was this project doomed long before it had a chance to say something important about our current political climate?  Let’s find out!!

Following the events of the first film, Matt Graver and Alejandro Gillick (Josh Brolin and Bencio del Toro) seem to have parted ways at least for the time being as the former is still running operations at the border while the latter is waiting for another chance to hit hard against the Cartel.  The good news is that such an opportunity has presented itself and will lead to their most drastic and bloody mission yet!  The bad news though is that said chance only happened because terrorist blew up a grocery store in Kansas City where at least one of them seems to have gotten into the country illegally from the border (ugh…) and might have even gotten a bit of help from the Cartel.  With a blank check from the government to mess things up in Mexico, Matt decides to kidnap the daughter of one of the Cartel bosses down there (Isabela Moner)  and then blame it on one of the other Cartel bosses; causing a civil war within the country that will decimate their stranglehold on the area.  Things SORT of go off without a hitch, but once it’s time for them to return the girl under the guise of “finding her” across the border, things go sideways as Matt and Alejandro’s crew is ambushed and the girl runs off into the desert.  Alejandro goes for the girl while Matt and the rest head back to base in Texas, but all is well as the ambush has made things more complicated than they should be and it’ll be that much harder for Matt and Alejandro to find a way to resolve this without stabbing each other, the US government, or anyone else, directly in the back.  Can Alejandro not only find this girl but find a way to keep her safe from those who wish her harm?  Just how far will Matt go for Alejandro, and will he be forced to choose between his friend and his duty?  Wait, how are we supposed to be rooting for these guys now!?  You SAW what they did in the last film, right!?