And so we’ve finally arrived at the final episode of this crazy and sorta brilliant series about bears, lesbians, and whatever the hell else enters Ikuhura’s wonderfully twisted mind!  It’s all been leading to this final episode where everything has to wrap up into a satisfying conclusion to make it all worth wild.  That’s a lot of pressure to put on one episode, but it’s the corner they painted themselves into when they made something this enigmatic and complex.  Does it all end with a satisfying bang, or will it all fall apart as we realize they had no idea what the heck they were doing!?  Let’s find out!!

The episode begins by reminding us what happened last time.  If you forgot already, prepare to feel the Feels!! 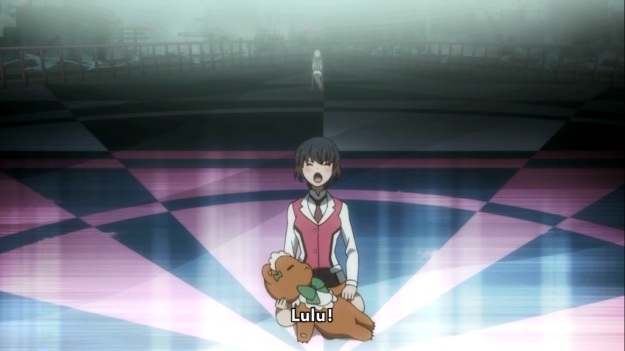 END_OF_DOCUMENT_TOKEN_TO_BE_REPLACED

We’re almost at the end of this folks!  Lulu got to safety in the last episode, but Kureha was caught by the Exclusion Group!  Ginko as well has seemed to have snapped and is ready to rampage all over the place, so who knows how this crazy journey is going to end!?  Let’s find out!!

The episode begins with what appears to be a PRETTY ominous look into the future.

END_OF_DOCUMENT_TOKEN_TO_BE_REPLACED

We’re back with another episode of everyone’s favorite highbrow show about lesbian talking bears!  We left off the last episode on quite a strong note with the death of Principal Yuriika and the endless possibilities that this event can take the story.  With only three episodes left, are we about to watch this series become one of the all-time great anime series, or will this crash and burn like many others before it?  Lets’ find out!!

The episode begins with a flashback to the night Reia died where Little Kureha is wandering the house looking for her mother who is nowhere to be found.  She ends up finding a note left by her mother that says she’s going to take Her back to her world.  Kureha doesn’t know who Her is which begs the question, how fast did Kureha lose her memory?  Reia died the night that Ginko left their house which means that the opening of episode seven (where Kureha is watching her mother craft the book and has no idea who Her is) had to have happened WHEN GINKO WAS STILL LIVING WITH THEM!!   After that, we cut to the present where things have changed significantly since the death of Principal Yuriika. 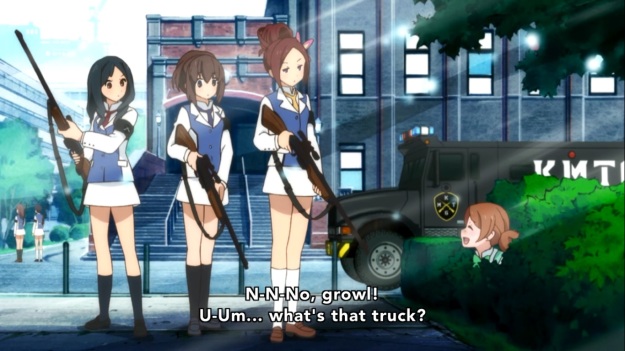 END_OF_DOCUMENT_TOKEN_TO_BE_REPLACED

After the overly contrived cliffhanger ending of the last episode, this one has A LOT to prove to make up for that bit of nonsense.  We’re getting closer and closer to the end, so does this episode bring us that much closer to the show’s grand crescendo, or do we keep getting half assed obfuscations like we did at the end of the last episode?  Let’s find out!!  Bly the way, I’m gonna tell you all up front that this episode was a NIGHTMARE to recap.  The whole episode is about small details being off that has great significance, flashbacks upon flashbacks, and more metaphorical imagery than in any other episode so far.  With that said, let’s get started!!

The episode begins with Ginko getting shot by Kureha and falling down the roof.  Huh.  I actually wasn’t expecting that.  It seems somewhat obvious that the secret Lulu told Kureha is that Ginko didn’t stop Sumika’s murder (something we found out in episode six), but even so I was doubtful that Ginko would end up taking the bullet.  Hell, if nothing else Lulu would try to stop Kureha, right?  Well, at least SOMEONE is happy about all this. 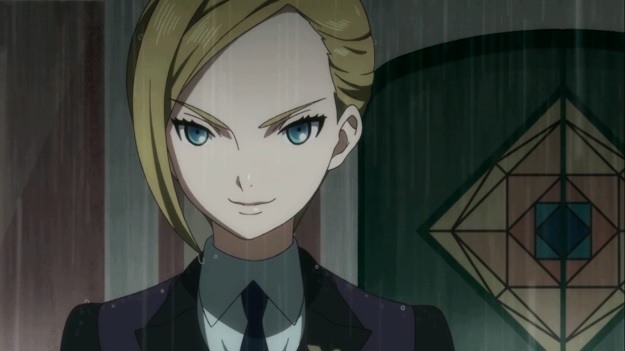 END_OF_DOCUMENT_TOKEN_TO_BE_REPLACED

We getting close to the end of this twisted little series, and it’s been on an upward swing for a while now!  Can the show maintain the momentum it’s built up for the past few episodes, or will all this build-up be for naught once everything is said and done?  Let’s find out!! The episode begins where the last one left off.  Kureha has just discovered that Ginko is her friend from long ago, but notices that she’s wearing her mother’s necklace and now wants answers.  Before Ginko can explain herself, we get a flashback to twenty years ago where a bear was left on the school steps.  GEE!  I WONDER WHO IT COULD POSSIBLY BE!!

END_OF_DOCUMENT_TOKEN_TO_BE_REPLACED

We’re back with another episode of Three’s Company 2015!  Will Kureha and the two bears finally start to get along?  Will Ginko’s heroic gesture be enough to win over Kureha’s heart?  After the explosive finale of the last episode, this one has a lot of clean up to do to make sure that what happened last time actually has some impact further down the road.  Does the show continue to move forward, or will it lose itself again now that the big midseason event has passed?  Let’s find out!!

The episode begins with a flashback to when Kureha’s mother was still alive and she seems to be writing the ending to the book she didn’t finish.  Spoiler alert: The two broke the mirror, made their promise kiss, and lived happily ever after.  Kureha asks her mother what the new story is about and she tells the young child that it’s about her adventures with the friend that she made.

“You know!  That bear that you found on that battlefield!  What were you doing there anyway?”

END_OF_DOCUMENT_TOKEN_TO_BE_REPLACED

We’re at the halfway point of everyone’s favorite gay horror romance with bears!  There was a lot of set up last episode that set up some huge expectations for this one.  Will we get a satisfying conclusion to this story arc, or will it all just fizzle out in a hodgepodge of mixed metaphors and obtuse symbolism?  Let’s find out!!

The episode begins where the last one left off.  Wait, how did that one end?

END_OF_DOCUMENT_TOKEN_TO_BE_REPLACED

The Reviewers Unite!
Blog at WordPress.com.