Well if Nineties Nostalgia is going to be a thing now, I guess we’ll be seeing movies like this pop up from time to time.  Hell, they’re making a Power Rangers movie, so why not a Goosebumps creature feature (which will hopefully be followed by an Are you Afraid of the Dark reboot)?  The trailers for this were pretty bad though with Jack Black doing his usual shtick, which I tend to like but can also be way overdone, and a story that feels like it’s been pulled right out of the hack’s guide for easy movie adaptations.  So does this turn out to be a Halloween kid’s classic like Monster Squad or Hotel Transylvania, or is this another marketing exercise gone horribly wrong like The Smurfs or Alvin and the Chipmunks?  Let’s find out!!

The movie is about “young” Zach (Dylan Minnette) and his mother who have just moved to Derry Maine… no wait, Madison Delaware.  They’ve just moved from New York so that his mother can be the principal of the local high school that he will be attending which I guess is embarrassing or something.  Anyway, Zach’s neighbor is a reclusive dude (Jack Black) living with his daughter Hannah (Odeya Rush) and the both of them seem rather strange.  He and his new friends Champ (Ryan Lee) eventually find out that the mysterious dude is legendary writer RL Stine and that his original manuscripts contain all the monsters he has ever written about.  They find this out to late however as some of the monsters have escaped including one who seems to be pulling the strings as it were.  Can Zach, Champ, Hannah, and Mr. Stine stop these creatures from destroying the town?  Will Zach win the heart of Hannah because every movie has to have that subplot?  Can this please be a hit if for no other reason than to get Jack Black enough clout to try and make a Tenacious D sequel!? 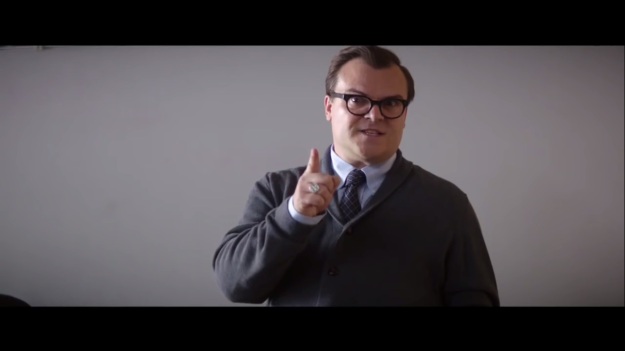 “We’re gonna call it… The PICKS of Destiny!  See, it’s a sequel… so now there are TWO picks!”