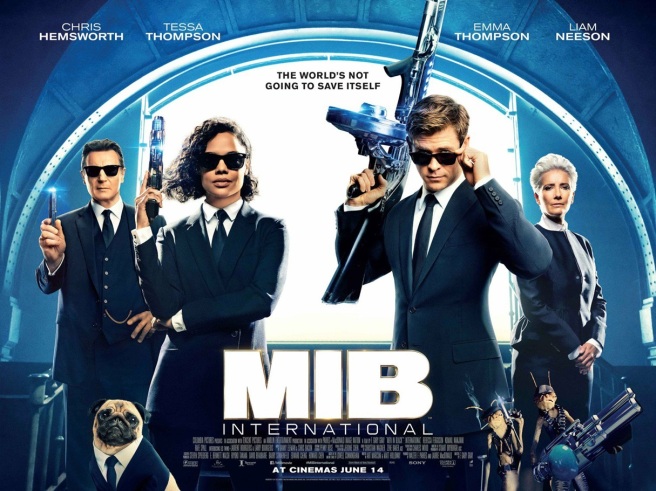 Men in Black: International and all the images you see in this review are owned by Sony Pictures Releasing

As tacky as it may seem, I kind of want to see MORE studios blatantly try to pick at the MCU’s carcass by snatching up its major talent and putting them in new scenarios with similar dynamics.  It’s kind of like the cinematic equivalent of an Elseworld’s tale or maybe even one of those bizarre crossover comics where the X-Men are on the Enterprise or Doctor Who has to fight the Cenobites or whatever.  Picking up both Chris Hemsworth in full on Thor Swagger mode and Tessa Thompson at the height of her popularity is probably the best thing this film has going for it because it certainly isn’t the name brand recognition.  The first Men in Black movie was good but is older than the target audience of this film, the sequel was utter dreck despite having my beloved Johnny Knoxville in a fun supporting role, and I never even bothered with the third movie that this thankfully doesn’t seem to be a direct sequel to.  Still, the concept is at least unique enough that you could still salvage it given the right talent which looks to be the case with its cast as well as being directed by F Gary Gray.  Can the MIB be brought back from the dead to be the next big cinematic franchise, or are we doomed to repeat the mistakes of the late nineties and early 2000s over and over again

Molly (Tessa Thompson) has spent the last twenty years looking for the mysterious Men in Black organization which tried to capture an alien in her childhood home but failed to do so and also failed to neuralyse her like they did her parents.  It was a pretty serendipitous event as well because Molly is a bit of a loner and cares more about unlocking the mysteries of the universe than having friends or forming genuine human relationships; a trait prided in members of the MIB!  Because of this as well as her ability to eventually find them, the current head of the New York branch Agent O (Emma Thompson) gives her a shot with the new moniker Agent M and sends her to London for training where she runs into Agent H (Chris Hemsworth) who is a big shot hero from a few years ago but seems to be in a bit of a slump.  He and the head of the London branch High T (Liam Neeson) once stopped an alien invasion with nothing but a couple of weapons and their wits, but when a protection operation H takes M along on goes completely awry, it could spell the end of not just their careers but the Earth itself.  They must solve the mystery of who wanted to kill H’s alien buddy Vungus the Ugly (Kayvan Novak) and whether or not there’s some greater conspiracy happening with the MIB that this is just a small part of.  Oh yeah, and there’s a comic relief alien (Kumail Nanjiani) that does cute things and spouts sarcasm.  Can M and H learn to work together and solve the mystery before MIB or something more dangerous catches up to them?  Will the organization that prides itself on being secretive collapse into ruin due to the duplicitous nature of one of its own?  Is it just me, or is it becoming increasingly hard to believe that THIS many people and THIS much equipment are STILL a complete mystery to the undiscerning masses; all of whom have smart phones and social media accounts?

END_OF_DOCUMENT_TOKEN_TO_BE_REPLACED 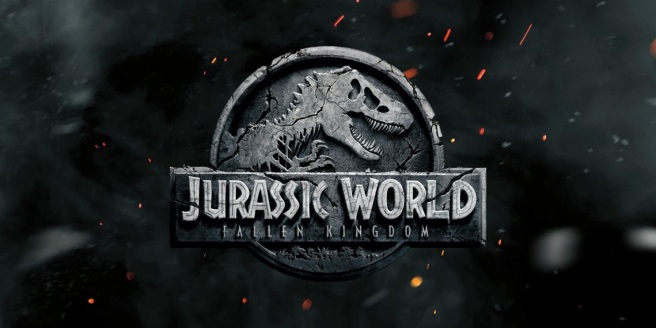 Jurassic World: Fallen Kingdom and all the images you see in this review are owned by Universal Pictures

Directed by J A Bayona

The first Jurassic World was one of my earliest reviews once I starting writing about films in theaters instead of just ones that were within arm’s reach, and I remember really liking a lot of it even if it did have some really bad moments throughout and a rather oblivious tone with the way it treats a lot of its cast.  After seeing Trevorrow’s follow up, The Book of Henry, it seems clear that he may not be the best at balancing disparate elements together; especially when compared to how seamlessly Spielberg combined the wonder of dinosaurs with their capacity for pure terror in the original Jurassic Park.  For this one though he’s taken a step back for a new director to try and get this goofy idea work once again even if the trailers make it look a LOT like The Lost World.  Can this franchise hold onto relevance for one more outing, or is finally time for this franchise to go extinct?  Let’s find out!!

Following the events of the last film, we find ourselves a few years out from the Jurassic World incident where everyone who’s still alive has moved on to something new and the dinosaurs on the island are simply left to their own devices.  However, it turns out that the island where a GIGANTIC THEME PART WAS OPERATING ONLY A HANDFUL OF YEARS AGO is sitting on top of an active volcano, so I guess that means the park was doomed either way.  This is a problem however because the island is the only place on Earth that is home to these magnificent killing machines, and several people around the world including a dinosaur protection organization led up by Calire Dearing from part one (Bryce Dallas Howard) are intent on finding them a new home before the volcano explodes.  She ends up getting the attention of Sir Benjamin Lockwood (James Cromwell) who I don’t THINK was in the original Jurassic Park but was apparently John Hammond’s business partner the whole time, and he has the resources to get those dinosaurs to safety.  Well that’s great, but why does he as well as his right hand man Eli Mills (Rafe Spall) need her?  So apparently, since she was an employee back then, she STILL has access to the security system (apparently that’s STILL up and running) and once she logs in, she can track the remaining dinosaurs on the island through GPS chips in their skin.  Even with that though, there’s still one creature that will surely elude them which JUST SO HAPPENS to be Blue the Veloceraptor from part one.  If only they knew some hunky bro who trained Blue and could potentially cox them to get in a cage and off the island.  Oh wait!  They DO know such a hunky bro!  Claire drafts Owen Grady (Chris Pratt) to join them on this wild expedition along with two volunteers at the organization she works for; Franklin Webb to HACK INTO THE MAINFRAME or whatever and Dr Zia Rodriguez who’s a dinosaur vet (Justice Smith and Daniella Pineda).  With such a crack team as well as a paramilitary group to back them up led by a hard ass solider (Ted Levine), they’re ready to face anything on the island, but they better do it fast because that volcano can blow at ANY minute!  Why they couldn’t assemble this team together a month ago I have no idea, but I guess even SUPER rich guys like Mr. Lockwood can only do so much in a limited amount of time.  Can this unlikely rag tag of activists and bros manage to save these dinosaurs as well as locate Blue?  Why exactly are Lockwood and Eli ready to entrust all of this in their hands, and do they have plans that they’re keeping close to the chest?  Just what the hell do they mean by Fallen Kingdom anyway?  Could it be… the Kingdom of MAN!?

END_OF_DOCUMENT_TOKEN_TO_BE_REPLACED 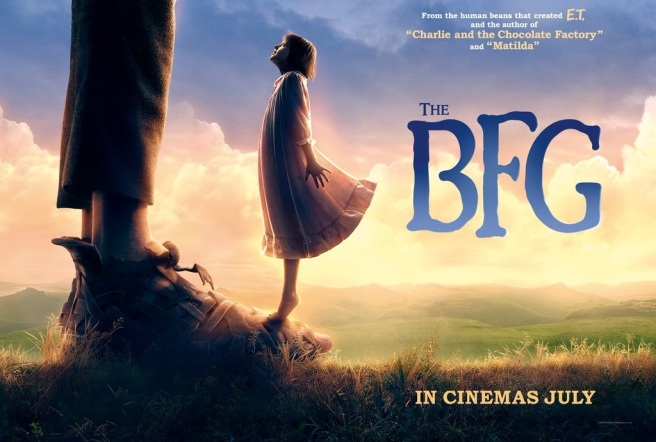 The fact that Spielberg hasn’t made a Roald Dahl film up to now seems like either an oversight.  That or maybe the guy thought that it would have been too obvious for the reigning king of cinematic wonder to adapt a story from one of the best children’s book authors of all time.  If you think about it, the really good Dahl adaptations come from unconventional places, whether it’s Mel Stuart who’s known for Willy Wonka and basically nothing else outside of television, Henry Selick who’s only done four movies in over twenty years (one of which is James and the Giant Peach and another is Monkeybone), and even Matilda which was directed by Danny DeVito of all people; a director known for The War of the Roses where Michael Douglas and Kathleen Turner kill each other over spite, and Death to Smoochy which had Ed Norton in an awful Barney suit.  The most mainstream examples I can think of would be Fantastic Mister Fox from Wes Anderson and Charlie and the Chocolate Factory from Tim Burton, the former proving my point as the most mainstream we can get for good Dahl is Wes Anderson and the latter probably being the worst Dahl adaptation pretty much BECAUSE of how Hollywood it was.  Now the biggest director of all time is stepping up to the plate to adapt one of Dahl’s books that has yet to have a major film adaptation, though there was an animated one that no one really cares about.  Can Spielberg work his magic yet again for material that seems perfectly suited for him, or will the magic of Dahl’s work be lost when adapted under the Disney umbrella?  Let’s find out!!

The movie follows a young orphan named Sophie (Ruby Barnhill) who suffers from Insomnia… I think, and she stays up late enough one night to see a giant roaming the streets of her town.  Sophie tries to return to her bed but unfortunately it’s too close to the window and the giant kidnaps her to take back to his home in Giant Country which doesn’t seem too hard to get to as the secret portal or whatever is just off the northern coast of Scotland.  The giant is played by Mark Rylance (who will at some point be known as BFG which does NOT stand for what you think it does) and tells Sophie that he plans to keep her there so that she doesn’t blab to the world about the existence of giants.  Now normally this would be the setup for a horror movie, but BFG turns out to be a vegetarian which means she’s safe from being eaten, and that the giant is actually super sweet which makes this situation more like an adoption without that pesky paperwork.  Now of course the movie isn’t just about these two hanging out together as the main conflict arises when we discover that not only is BFG a rather small giant, but that the other giants are total pricks who like to eat children and bully and the kind old man for reasons that I’m sure make sense to the giants.  Can Sophie come up with a way to stop the other giants from picking on BFG?  Will the other giants discover that BFG has a human around which will set them off on a rampage?  Wait, why is BFG responsible for people having dreams?  Seriously, what does that have to do with anything!?