You know what movie I’ve recently watched again?  Face/Off!  Seriously, isn’t that like THE BEST MOVIE EVER MADE!?  Great performances, over the top action, doves, it’s got it all!  I’ve always had a soft spot for action movies like that where two awesome actors are either working together or fighting one another while ludicrous action is going on around them.  It’s my excuse for still liking Central Intelligence, and it’s also why I found myself really excited to see this movie.  That trailer with the goofy song choice, the laughable premise, and Idris Elba being the most awesome Terminator imaginable hit all the right buttons for me, and throwing in John “THE DWAYNE” Rockson together with America’s favorite British dude Jason Statham was just the icing on the cake!  Can this spin-off of the most absurd action franchise of all time manage to excel past what came before it, or was moving the focus away from the main cast as bad an idea now as it was when they did it in Tokyo Drift?  Let’s find out!!

After the events of Fate of the Furious, Luke Hobbs (Dwayne Johnson) and Deckard Shaw (Jason Statham) are no longer in jail because… I guess saving the world gives you a free pass, and are going about their daily lives as the most interesting men in the universe; living in nice houses, driving nice cars, and kicking random bad guy butts whenever the need arises.  The best part is that neither one of them has to see the other one since they live in entirely different countries working for entirely different bosses, and can just leave each other in peace, because I guess they don’t like each other anymore for some reason.  Well too bad for them!  Shaw’s sister Hattie (Vanessa Kirby) gets swept up in some global crisis involving a deadly robo-virus and is being hunted down by deadly robo-MAN Brixton Lore (Idris Elba), so Hobbs and Shaw have to put aside their differences and work together to keep the virus Hattie selflessly injected into herself from falling into the wrong hands, and to find some way to cure her before her insides turn to mush.  Can these three action heroes with coolness to spare but baggage for days outsmart the perfect cyborg human and whatever EVIL organization he works for?  Will they find the cure for this virus inside of a fast moving car or at the end of a gun barrel!?  I wonder if the next one will be Hobbs & Shaw vs. The Fast and the Furious… 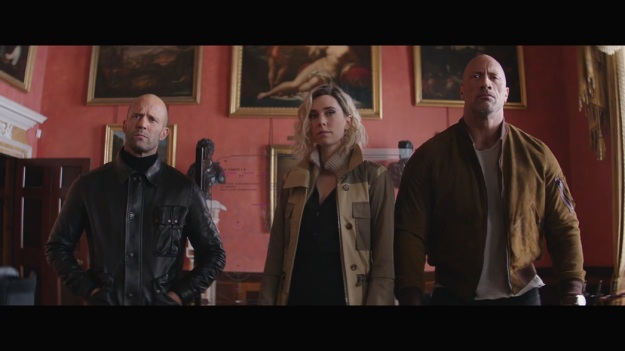