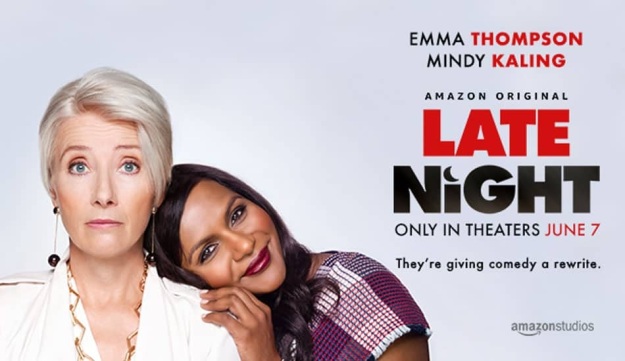 I’m fairly certain that my usual theater had a poster for this and then just decided not to actually screen it so this is yet another trip to the far away theater (i.e. thirty minutes away) which honestly is usually a good sign.  Not always, in fact this is the exact same story that preceded The Green Inferno, but the movies that aren’t wide enough for my local theater to get are usually have a lot more going for them; for good or ill.  I hadn’t heard much about this movie and only have a vague idea of the premise, but the cast is very talented and I’m always intrigued by entertainment that’s ABOUT the making of entertainment which is always a journey in its own right.  Does this glimpse into the world of late night television give us a funny and insightful look at the behind the scenes action, or will this end up being as boring as… I don’t know whichever one of those shows is the worst?  Let’s find out!!

Katherine Newbury (Emma Thompson) is the host of a late night show that has been running for over twenty years, yet despite such a phenomenal legacy and a small army of Emmy awards behind her, the new network President Caroline Morton (Amy Ryan) tells her that the show will be cancelled in a few months and that she’ll be replaced with a hip young talent that gets those pesky millennials!  With basically nothing left to lose, she starts to do the one thing she has come to fear in the last ten years; actually try.  I know, truly a fate worse than death.  Part of her initiate to revitalize the show includes hiring someone in the writers room whose only qualification is to NOT BE A WHITE GUY, and as luck would have it Molly (Mindy Kaling) is interviewing that day and meets those very stringent qualifications!  Sure, she’s never written for a comedy show ever, but why should that stop her from filling up space and shielding the show from further criticisms of being too old and too white?  AH HA!  It’s not as simple as that however!  For you see, Molly is not JUST a blatant diversity hire!  She actually has good ideas, some decent writing chops, and may just be what this crusty old talk show needs in order to genuinely appeal to today’s audience instead of whatever crap Katherine and the other writers were gonna try to fake their way into relevance!  Can Molly learn to thrive in this dinosaur of a work place and find the right balance between respecting its legacy and changing it for the better?  Will Katherine realize what she’s been doing wrong all this time and genuinely change for the better before losing the best thing she has in her life?  Well I mean she has her husband (John Lithgow), but is he paying the bills around here!?  I DON’T THINK SO!!

Not EVERYONE can go to TBS, alright!?

END_OF_DOCUMENT_TOKEN_TO_BE_REPLACED

It’s always good seeing Kevin Hart!  Okay, maybe not… BUT it’s always good to see Tiffany Haddish, right!?  Ehh… fine, these are two VERY talented comedians but they aren’t always in the best movies as is the case with A LOT of successful comedians.  Putting them together SHOULD be a match made in heaven, but then again maybe the filmmakers thought the script was so bad that even Hart couldn’t save it by himself.  In any case, we can hope that there are at least a few good jokes in here even if the premise and the trailers don’t seem to be promising all that much.  Does this movie manage to rise above expectations to be one of the better comedies this year, or are we doomed to suffer yet another mediocre effort from filmmakers and comedians who should be working on WAY more ambitious projects than this?  Let’s find out!!

Teddy Walker (Kevin Hart) is your average Joe who is actually doing quite well for himself despite dropping out of high school and for reasons other than he’s a genius who went off to start his own company.  Instead, he’s managed to find a good job at a barbecue grill store and has set himself apart from his peers due to his world class skills in customer service!  I kind of find that hard to believe though considering he ends up accidentally blowing the place up not long after the movie starts.  You’d think someone as professional as he is wouldn’t have done something like that, but in any case Teddy is now without a job which is doubly a problem as he’s been living paycheck to paycheck for some time; refusing to tell his girlfriend Lisa who has a WAY more successful job (Megalyn Echikunwoke) that he’s not as well off as he lets on and that he could REALLY use a few bucks to ease the stress.  Luckily for Teddy though, his buddy Marvin (Ben Schwartz) JUST SO HAPPENS to have an even BETTER job for him all lined up… but he has to get his GED first!  To make matters worse, the principal of the high school (Taran Killam) is someone he had beef with in high school (for some reason…) and is not about to let old grievances die off, even if he can’t TECHNICALLY keep Teddy from going to night classes run by Professor Carrie (Tiffany Haddish) which I assume is the way she prefers to be addressed.  Can Teddy get his GED and that sweet new job without having his girlfriend finds out all of his deeply held and embarrassing secrets?  What wacky hijinks will he get into with a classroom full of eccentric odd balls that have their own reasons for getting their GED?  Can we send all six of the scriptwriters to night school?  I don’t know about you, but they could really use some brushing up if this is what they consider “professional” material. 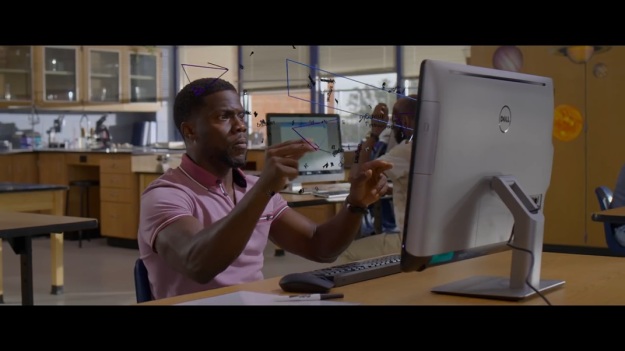 “Oh well.  I’m sure this will all make sense in the editing room!”