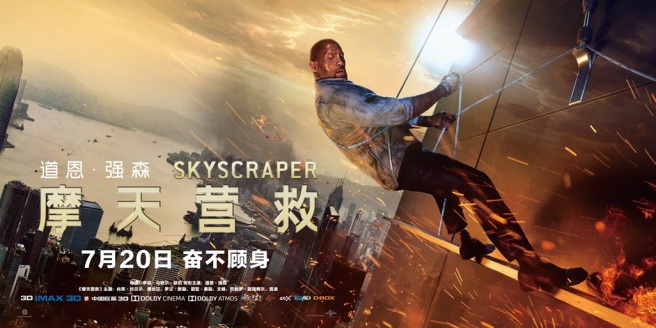 I for one will NEVER turn down a Dwayne “The Rock” Johnson flick even if it looks as freaking ridiculous as this Die Hard knockoff looks to be!  The guy is an unstoppable force in Hollywood and the fact that almost all of his movies are least SOMEWHAT enjoyable is a good indication of why that’s the case.  This one looks to be no different in any significant way, but hey!  More of what we love from the guy can’t possibly be a bad thing… right?  Does this manage to be fun despite its silly premise and unbelievable set pieces, or is there a limit to what even THE ROCK is capable of carrying?  Let’s find out!!

Our hero is Will Sawyer (Dwayne Johnson) who’s a former FBI… SWAT… Solider… something, who’s spent the last ten years working as a private security consultant.  See, he had to retire after… the incident, which may have taken one of his legs also led to him meeting his wife (Neve Campbell) who he then married and had two kids with (McKenna Roberts and Noah Cottrell) so six of one half a dozen of the other!  Anyway, he’s landed his biggest job yet as a third party verifier of the security and safety systems that are put in place at THE PEARL.  What is THE PEARL you may ask?  Well it’s the largest skyscraper IN THE WORLD (it sure would suck if someone had to climb it later in the movie) that was built by Chinese billionaire Zhao Long Ji (Chin Han) and is about to open its upper floors to renters; provided of course they pass Will’s safety check which will secure them a reasonable insurance policy!  Well as exciting as all that sounds, things start to go south as a crew of well-trained criminals (led by Roland Møller) not only infiltrate THE PEARL but also get total control of their security system, and they set fire to the upper floors in an attempt to smoke Zhao out of his penthouse and get whatever it is he’s hiding up there.  There’s just one problem!  Okay, actually two problems.  Will’s family was STAYING on one of those floors they just so happened to set on fire, and Will himself was outside THE PEARL as part of his security check and now needs to find a way inside.  So not only did you piss him off by putting his family in danger, you’re gonna force him to face heights, smoke, and absurdly high temperatures as well which is just gonna get him THAT much more angry at you!  Can Will somehow infilitrate the burning building and save his family before it’s too late?  What exactly is Zhao hiding, and is worth all the destruction these bad guys are causing?  Wait, is he SERIOUSLY gonna try to jump that!?