How amazing is it that on the cusp of a freaking Lethal Weapon television show premiering that Shane Black (the writer of the original film) has a new movie out in theaters just to show the futility of even TRYING to recreate what he did back in 1987?  The guy may not be as prolific as some other great filmmakers out there, but between the films he wrote and the ones he directed, there’s no denying that Shane Black is a first rate talent that we should all be thankful is out there making movies.  Does his latest film live up to his track record of excellence, or is this the first sign that the guy is tapped out creatively and that it’s all downhill from here?  Let’s find out!!

The movie follows Jackson Healy (Russell Crowe) and Holland March (Ryan Gosling); the former being a goon for hire and the latter being a detective from the Richard Moore School of Sleuthing.  The duo cross paths early on as Ryan Gosling is trying to find a girl (Margaret Qualley) for a client but the girl CLEARLY does not want to be found.  Because of this, she hires Russell Crowe to convince him to stop, which he does… violently.  Unfortunately for the both of them, this case is a lot bigger than either of them anticipated and after an assassination attempt fails to take out Russell Crowe, he goes to see Ryan Gosling about teaming up to find out what the hell is really going on here.  Along for the ride (despite Ryan Gosling’s insistence to the contrary) is Holly March (Angourie Rice) who may only be a teenager, but is at least half as good as a detective as her father claims to be.  Along their journey, they’re run afoul of gangsters, pornographers, at least one politician, and a shit load of gunfights as they search for answers and try to do something good for once in their wretched and miserable lives!  Can this trio find out who this girl really is and why everyone is looking for her?  Can these two knuckleheads work together without one of them killing the other?  Does Shane Black find a way to fit in Christmas again!? 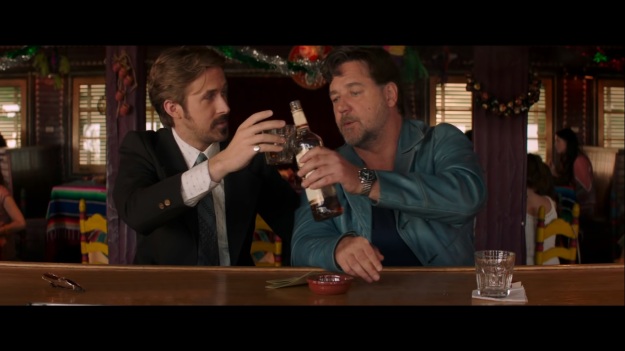