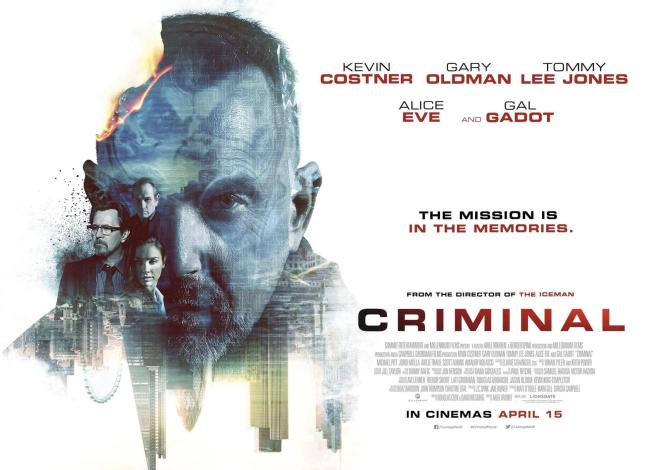 While Michael Keaton is out there making his comeback off of Birdman and Spotlight, one of his leading man contemporaries of the nineties, Kevin Costner, is trying to rebuild Is career off of Superman cameos and sports movies.  Sure, Michael Keaton was in the Need for Speed movie and the Robocop remake, but at least he’s spending his time in between cash-in movies doing Oscar caliber work to keep himself respected in the industry and not just relevant at the moment.  Still, Costner has some serious talent and seems to be working towards artistic relevancy even if it hasn’t panned out so far so there’s hope yet that he can get back to or even surpass his peak relevance when Dances with Wolves was tearing up the Oscars.  Will Criminal be the movie to bring Costner back to leading man status, or will this be yet another mistake to knock him down a peg toward total irrelevance?  Let’s find out!!

The movie begins with good ol’ Ryan Reynolds as a secret agent (again) who’s doing all sorts of spy things without any real context for the audience.  He’s carrying around a bag of money with a passport inside, so clearly this is some sort of rainy day fund for either himself or for someone else.  It’s clear that that rainy day has come however as he’s being tailed by a red headed bad guy (Antje Traue) who’s working for the main bad guy Xavier Heimdahl (Jordi Mollà) and they’re trying to stop Ryan Reynolds  from… doing whatever it is he’s doing.  He does the best he can but I’m guessing the guy was shooting during his lunch breaks from Deadpool, so he gets caught and murdered by the bad guys within fifteen minutes of the film, though apparently without giving them the information they needed.  The CIA, whom Ryan Reynolds was working for, is uber-pissed about all this and the head of this branch (Quaker Wells played by Gary Oldman) which for some reason is based out of the UK (okay…) needs whatever information Ryan Reynolds was hiding from the baddies.  So what’s the BRILLIANT idea that he comes up with?  Well… Get a world renown doctor in the field of memories (Dr. Franks played by Tommy Lee Jones) to do a SUPER SCIENCE EXPERIMENT where he essentially transfers the memories into another person.  Who’s the vessel for these new memories though?  Well for reasons (sciency reasons I’m sure), they need someone who’s frontal lobe isn’t working properly and the only person they could find is a psychotic and ultra-dangerous criminal by the name of Jericho Stewart (Kevin Costner) to play along with their Frankenstein plan and not try to escape at the earliest opportunity.  Oh wait.  After the surgery he does just that.  Whoopsie daisy.  So now we got a career criminal with CIA memories, a bad guy looking to take over the world, and I think the Russians are in the mix as well; all of whom are gonna give the CIA and Gary Oldman a brain aneurysm before this day is over.  Will the lost memories of Ryan Reynolds be enough to save the world from Xavier Heimdahl?  Will Jericho get over his angst and brooding long enough to not let the world be destroyed?  Who thought this was going to work?  Like… at all?