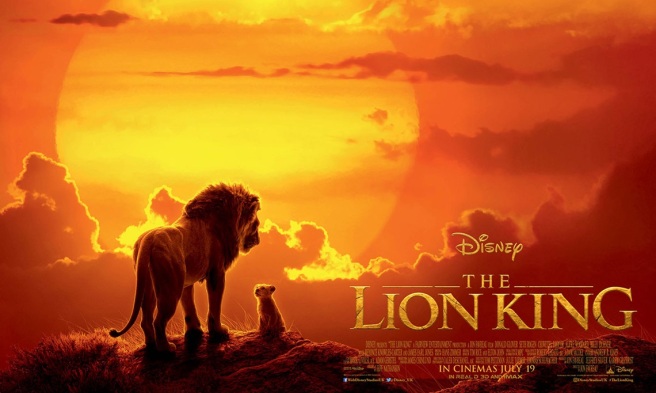 Didn’t I just do this a month ago?  Seriously Disney, I know you own basically all of entertainment now, but can you at least change it up a bit from month to month?  We JUST got done making fun of the genie in Aladdin; we don’t need another remake this soon!  Seriously, if they keep burning through their renaissance films like this they’re gonna have to take another stab at Treasure Planet before 2030, and if they thought that one sunk like a lead balloon LAST TIME… oh who am I kidding?  We’ll give it a billion dollars at the box office without a second thought!  So until those bleak times are upon us, does this latest remake of a beloved nineties classic live up to the original, or is this a worse idea than Lion King 1.5?  Let’s find out!!

Now stop me if you’ve heard this one before!  Simba (Donald Glover) is the son of Mustafa (James Earl Jones); king of the Pride Lands and brother of Scar (Chiwetel Ejiofor) who conveniently has a scar on his face to go with the name.  Now if the name wasn’t enough to convince you, scar is one EVIL lion that wants the throne for himself but now has to wait behind the little brat for his shot.  That is unless he pulls a Hamlet and MURDERS THE KING IN COLD BLOOD, albeit with a stampede instead of a jug of ear poison.  Convincing young Simba that he is responsible, he runs off to live in exile while Scar takes the Pride Lands for himself, and the young prince runs into two free spirited do nothings called Timon and Pumbaa (Billy Eichner and Seth Rogen).  While Simba is living his carefree life as a slacker, things are not going so well in the Pride Lands under Scar’s quasi fascist rule with the help of the hyenas and so Simba’s childhood friend Nala (Beyoncé Knowles-Carter) runs off to find help, and believing Simba to be dead this whole time… well let’s just say there’s an awkward conversation very soon in their future.  Can Simba find the courage to face his fear and his guilt that have defined him for so long?  Just how far will Scar go to stay seated on his throne, and does Simba have a chance of defeating him after all this time?   Did Disney listen to that “everything the light touches” line again recently and consider that a challenge?

END_OF_DOCUMENT_TOKEN_TO_BE_REPLACED

Directed by no one

So you’re telling me that there’s a movie in theaters right now where a sex pest had to leave the movie halfway through its tumultuous production, and it’s NOT Bohemian Rhapsody!?  Yes, it’s not a typo that I didn’t credit a director on this movie because the guy who at some point sat in that chair got booted off of it and got the added justice of having his name stripped from the credits; something that I’m sure Fox would have really liked to do for its movie before things got awkward at the Oscars.  Even before I knew any of that though, I was not looking forward to this considering how low rent and unappealing the trailers were which makes it all the more astounding that the darn thing cost upwards of a hundred million, so it seems pretty clear we’re in for a train wreck of epic proportions.  Does this movie miraculously stick the landing despite everything going against it, or are we just here to watch it flame out in spectacular fashion?  Let’s find out!!

June Bailey (Brianna Denski) is your typical millennial smarty pants who was basically raised her whole life on STEM related games; the main one being an imaginary park known as WONDER PARK with fantastical rides and a staff of talking animals that she and her mother (Jennifer Garner) would work on each night before bed.  Over time, June’s interest started to bleed out into the real world which started off rather dangerously with unsafe roller coasters made out of plywood and city property, but eventually she started to focus on smaller scale project with actual engineering behind them instead of trial and error until someone cracks their skull open.  However… something happens.  I’m not going to say WHAT because the trailers do a very good job of hiding what this movie is actually about, but there’s a tragedy that causes her to give up on her Wonder Park dreams, and since this is a Kid’s Movie the universe will not take such flagrant cynicism lying down!  Thorough the power of unexplained magic, June ends up in Wonder Park itself which is run by the loyal animal staff which includes Boomer the bear, Gus the beaver, Cooper the OTHER beaver, Greta the boar, and Steve the porcupine (Ken Hudson Campbell, Kenan Thompson, Ken Jeong, Mila Kunis, and John Oliver), but has been left in disarray for some time now.  See, something happened to the park as well which brought THE DARKNESS upon them (I WONDER IF HER TRAGEDY AND THEIRS ARE SOMEHOW CONNECTED!?) that caused the guests to disappear and the stuffed animals to turn homicidal; taking the group’s leader Peanut (Norbet Leo Butz), a chimpanzee with a magic marker who made the rides June and her mother thought of.  So now June is stuck in the last place she wants to be with animal friends who are not very helpful and is now trying to fix an amusement park in order to save a chimp with magic powers from adorable abominations.  Sounds legit if you ask me!  Can June and her friends figure out how to get the park up and running again to banish the darkness once and for all?  Will this exercise in engineering splendor and stuffed animal homicide be just what June needs to confront her traumas once and for all?  Is it just me, or does this all sound pretty convoluted for a movie so clearly aimed at five year olds?