We’re back with another episode of I Love Trixie, starring MLP’s very own Lucy/Ethel besties Starlight Glimmer and THE GREAT AND POWERFUL TRIXIE!!  It’s no secret that I am a huge fan of any episode that puts these two together, and the fact that they are the subject of the season premiere’s second episode is certainly a good way to get me to overlook the fact that we’re starting the season off without a big two-parter to shake things up and start things off with a bang.  Does this turn out to be yet another wonderful use of the two best characters the series has going for it right now, or has this particular team up managed to run its course already?  Let’s find out!!

The episode begins with Trixie and Starlight in the kitchen of Twilight’s Doom Fortress where the former is getting some remedial lessons on magic.  I don’t know why she needs magic when she’s already a master of MAGIC!, but I guess THE GREAT AND POWERFUL TRIXIE will not be outdone in ANY field of study.  At the very least, she’s still the master of adorable frustration which she proves to us once again after the fifth attempt to turn a pepper shaker into a teacup fails.

“You put an anti-magic spell on this, didn’t you.  Yes Trixie.  I took the time to come up with a spell to nullify all magic and placed on a random object you JUST SO HAPPENED to try and turn into a teacup.  I absolutely did that.”     “AH HA!!  THE GREAT AND POWERFUL TRIXIE IS TRULY THE MASTER OF DEDUCTION AS WELL!!”

END_OF_DOCUMENT_TOKEN_TO_BE_REPLACED

We’re back with another episode of My Little Pony: Friendship is Magic and it feels like an ETERTINTY since I last said that!  Then again, the show has taken MUCH longer to start a new season in the past, particularly between seasons four and five when they were being switched over from The Hub to Discovery Family, but that doesn’t mean it was any easier to go without my weekly fix of Pony Magic!  Now the new season is actually doing something very different right off the bat as the show USUALLY starts off with a two-parter to open the season with yet decided to forgo that for the first time since the series began to instead have to separate episodes to start us off with.  Does a less bombastic opening salvo for the season still manage to bring the excitement needed to bring the fans back on board, or does this first episode drop the ball right off the bat?  Let’s find out!!

The episode picks up not too long after the events of the season 6 finale where everyone is getting ready for the award ceremony to honor Starlight Glimmer, Trixie, Thorax, and Discord, for their brave efforts to thwart Queen Chrysalis’s latest scheme.  They didn’t CAPTURE her so she’s still out there probably scheming something else, but her power has at least been diminished since all the Changelings turned on her and became beautiful florescent colored bug horses for their troubles and installed Thorax as their new king.  Probably less to do with his role in overthrowing the monarch than the fact that he now has BAD ASS ANTLERS! 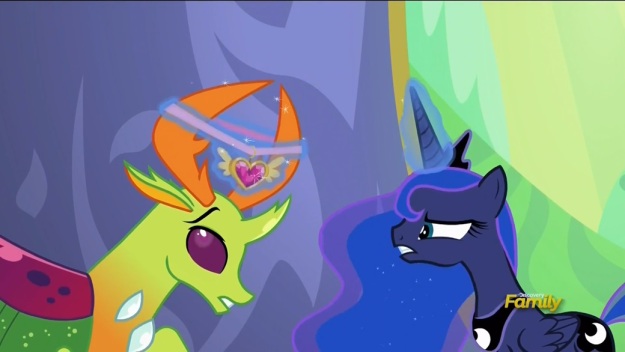 END_OF_DOCUMENT_TOKEN_TO_BE_REPLACED

We’re back with another episode of the Discord Diaries!  Now the last season used John de Lancie’s iconic character a whole bunch, so maybe the thinking on this season is to not overload us with his presence; lest he end up overtaking the show which can happen when side characters get to popular (*cough* Jack Sparrow *cough*), so saving Discord for when the show really needs it might be the right move.  Does this new strategy pan out as we get a REALLY great Discord episode for the sixth season, or is this just another mediocre romp for the season’s mostly disappointing second half?  Let’s find out!!

The episode begins with Discord acting all pissy (as is his nature) because Fluttershy has to go to Yakakistan (ugh…) on some sort of goodwill trip with Princess Celestia and the other protectors of Friendship.  Discord obviously can’t go because he’s not known for his tact and grace… and I’m pretty sure that brining a destructive God of chaos sends the wrong message on a peacekeeping mission.  That and I wouldn’t be surprised if he has arrest warrants all over Equestria; not just for enslaving everyone thousands of years ago, but for shit he’s done recently.

“You know I can’t go back there after… the incident.”     “Is Celestia still made at you for that?”     “Luna thought it was funny, so she’s been keeping me at arm’s length from the Sun Butt’s wrath.”