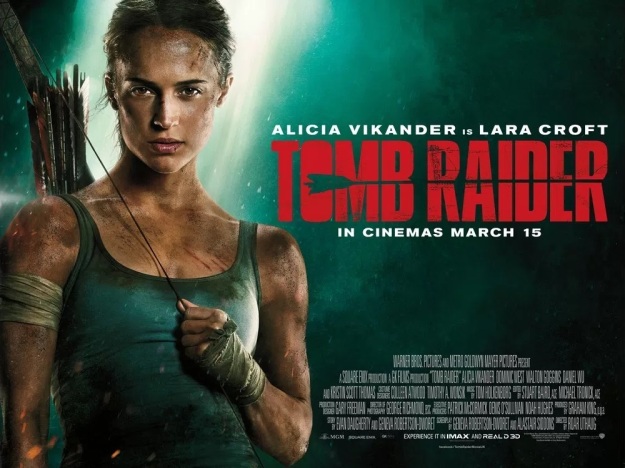 Tomb Raider and all the images you see in this review are owned by Warner Bros. Pictures

ANOTHER video game movie!?  Haven’t we tried that like forty times already!?  Well that’s a bit unfair.  I’ve always maintained that a good chunk of them are actually pretty good for their respective genres such as the first Mortal Kombat, and we’ve rebooted the video game franchise since the LAST time we were making films off of this series, so an updated interpretation with brand new Lara Croft could really be something if they get the right people behind it!  Does this manage to be the first video game movie to be one that EVERYONE thinks is good instead of just me?  Let’s find out!!

Lara Croft (Alicia Vikander) is the daughter of a world renowned… business man I guess (Dominic West) considering her family is renting that building from Iron Fist, but she doesn’t hang around much anymore since her father disappeared several years ago.  Instead, she spends most of her time MMA training and working in the Gig Industry; riding her bike for fun AND profit!  However, an associate of her father (Kristin Scott Thomas) has to bail her out of trouble due to a situation that REALLY wasn’t her fault (how do you get arrested for getting hit by a car!?) and she insists that Lara give up this lifestyle to finally claim her birthright and the millions of dollars that go with it.  All she has to do is sign the documents confirming once and for all that her father is dead (is that a thing?  Does a family member have to sign those in order for a missing person to be declared dead?) which she’s been reluctant to do as she still thinks he’s out there somewhere.  She might just be right about that when she finds her father’s secret laboratory where he left a final message for Lara; telling her to burn all his research to the ground and to not look for him.  Naturally she doesn’t do that because who WOULD just give up after getting some pretty solid evidence that could lead to where he is, and so she enlists the help of a fisherman (Daniel Wu) whose father was connected to Lara’s and the two set off to some MYSTERIOUS ISLAND!  The good news is that it’s not Skull Island and teeming with giant monsters.  The bad news?  Well there are a bunch of dudes with guns looking for something on the island, and the head dude named Vogel (Walton Goggins) thinks that Lara might hold the key to finding it.  Will Lara be able to find what these men are looking for as well as finding her father in the process?  What are the sinister plans that Vogel has in store once he locates this mysterious artifact?  You know, we keep going on about her dad, but are we SURE that her mother is dead too?  All I’m saying is that if Angelina Jolie doesn’t show up in the sequel, I’m going to be VERY disappointed!

“The Colonel’s secret recipe is right behind this door.  Once I unlock it, those eleven herbs and spices will be MINE!!”