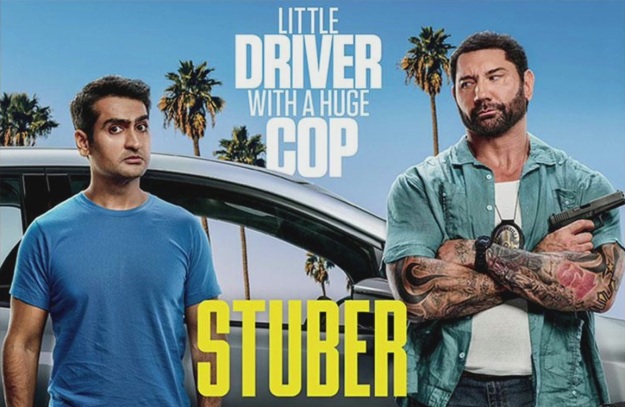 I don’t know about you, but if there’s ONE thing I’ve always wanted to see in a movie, its endless product placement for a company trying to corner the market on an industry through sheer financial force of will!  Then again, I probably shouldn’t be sitting TOO pretty on my high horse considering I still review Disney films despite their vicious takeover of 20th Century Fox (coincidentally the studio who made this film), so I guess I’ll just have to judge this movie on its own merits instead of how blatantly EVIL it’s marketing is.  Anyway!  Does this Buddy Comedy manage to be the best of both their lead actors’ filmographies, or are you much better off watching Hotel Artemis and The Big Sick instead?  Let’s find out!!

Stu (Kumail Nanjiani) is your average millennial stuck trying to make it in the gig economy and failing to earn the affections of his BFF (Betty Gilpin) who he’s been secretly in love with but decided to invest in her startup company instead of just telling her he likes her.  We’ve all been there, am I right!?  Well investing in other people’s ideas isn’t cheap, so along with his day job at a sporting goods store he drives with Uber (DOWNLOAD NOW FOR YOUR MOBILE DEVICES!!) and does his very best to be as accommodating as possible.  This is 2019 though, and apparently being a massive jerk is in vogue now so despite his best efforts he’s barely hanging onto his current user score which is dangerously close to getting him kicked off the service entirely.  Enough about that guy though!  This is a movie with a famous wrestler, so let’s talk about that famous wrestler!  Vic (Dave Bautista) is a cop who is obsessed with finding this drug trafficker named Oka Teijo (Iko Uwais) who he nearly caught a while back but managed to escape and also killed his partner in the process.  After six months though, there hasn’t been a break in the case and so he takes a bit of time off to try and reconnect with his daughter (Natalie Morales ) and finally get that laser eye surgery he’s been meaning to get.  He’s at home and waiting for his vision to return as well as running out the clock until the start of his daughter’s art show when he gets a call from one of his informants telling him that Teijo is gonna be at this big drug deal later tonight at some undisclosed location in town.  Seeing his chance but not seeing much else, Vic is determined to take Teijo down once and for all… but he needs a ride.  I THINK YOU SEE WHERE THIS IS GOING!!  Can Stu provide wonderful ride sharing service to the antsy and determined Vic and maintain his unobtrusive existence with a slightly higher star rating?  Can Vic solve this case without his vision, and can he convince Stu to help him beyond his duty of just getting him from one place to another?  Seriously, does this dude not have even ONE cop friend or a super tough bro he could have called instead!?