Here we are with the second and final part of my look at games I played in 2016 (part 1 can be found here) that were interesting enough to talk about!  Like before, any game that I didn’t play on PC will be note specifically which platform I did play them on because it was way easier for me this year to play on my computer than to do so from a console.  I mean, I’m ALREADY sitting in from the damn thing most of the time!  Anyway, let’s not waste any more time and just get started! This is gonna be fun, right? 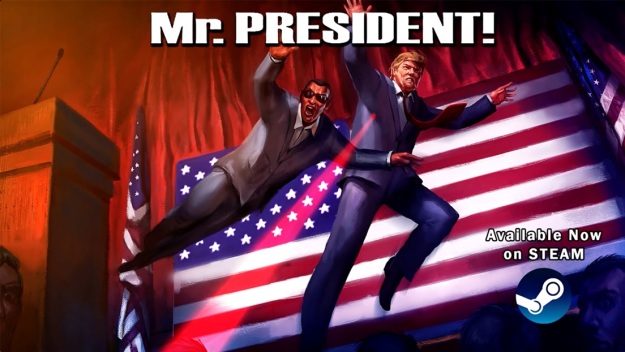 Sigh… You know, this game was a lot funnier when we weren’t months away from a tax payer funded Thunderdome or some asshole House Rep putting forth a Purge bill.  Still, the fact that Bossa Studios hasn’t jumped on this is kind of surprising as I was reminded of games like Surgeon Simulator and I Am Bread while playing it even though it’s clunky and as all hell and riddled with poor design decisions.  The game’s primary purpose is political satire, so naturally the timing of the game’s release was just as important as making a good game, but behind all the frustrating elements and damn near impossible stages, there’s a brilliant physics based puzzle game to be made here.  I don’t know who Game Developer X is or if they’re even interested in this concept outside of its use as a political lightening rod, but I do want to see what they end up making next; whether it’s a refinement of this formula or if they’ll continue to push buttons with even zanier games.  If it’s the latter though, PLEASE let someone else make a sequel to this so we can see its full potential!