Geez, first we had Jennifer Gardner do one of these last year, and now ACADEMY AWARD WINNER OCTAVIA SPENCER?  And the thing is, I had no idea what this was about until I walked into the movie!  I thought it was Nick Sparks fluff piece or something like that, but no!  Alright, so I didn’t have the best attitude once they movie let me know what it was about within the first five minutes, but it’s not like there aren’t ANY religious films I like!  Certainly Noah counts, right?  Anyway, does The Shack manage to rise above its contemporaries and be a thoughtful examination on religion and spirituality’s role in working through grief, or is it just like every other mediocre or downright offensive Christian film we’ve gotten since Pure Flix managed to make a few bucks at the box office?  Let’s find out!!

The movie begins with the wholesome Phillips family led by the father Mack (Sam Worthington) who one day decides to take the kids on a camping trip which couldn’t POSSIBLY go awry!  Oh wait.  The youngest of the group Missy (Amelie Eve) goes missing and presumed dead.  I THINK the body is found in the titular shack in the mountains, but the movie is a bit coy on that detail; presumably so they can avoid showing a dead body in this wholesome family film.  Anyway, the tragedy shatters the whole family including their son Josh (Gage Munroe) and their other daughter Kate (Megan Charpentier), but Mack is taking the brunt of the guilt; leaving the mother Nan (Radha Mitchell) to pick up the slack while he’s moping around the house.  One day however, he gets a mysterious letter telling him to meet God in the shack where Missy’s body was found which sounds suspiciously like the opening to Silent Hill 2, but unfortunately we’re not in for that kind of movie.  Instead, he steals his best friend’s truck (played by Tim McGraw) and drives up there thinking that he’ll find the killer waiting for him.  No such luck so Mack has a near suicidal fit of rage and fury but is saved from blowing his brains out by some dude who JUST SO HAPPENED to be walking by at just that moment.  Not only that, but the dude seems to know Mack and invites him to join his family in another nearby cabin.  What’s odd though is that the weather instantly changes from the dead of winter to a bright spring day, and on top of that, the dude’s father is played by Octavia Spencer.  So why would this guy played by Aviv Alush call this woman The Father?  And who is this mysterious third person there played by Sumire Matsubara?  Wait a minute… meet God in the cabin… there are three of them… oh.  Okay, so we’ve got The Father (Spencer), The Son (Alush), and the Holy Spirit (Matsubara) basically pulling a Christmas Carol on this dude to get him over the death of his daughter by… sort of answering his very obvious and leading questions about the nature of God in a world that isn’t perfect.  Uh huh.  So then… does Mack manage to find a reason to live after spending a few days with these three charming fellows?  What insights do they have that can apply to YOUR lives as well as his?  Is there a book you can buy to go along with the movie that will shed ADDITIONAL insights and unlock the secret to true happiness!? 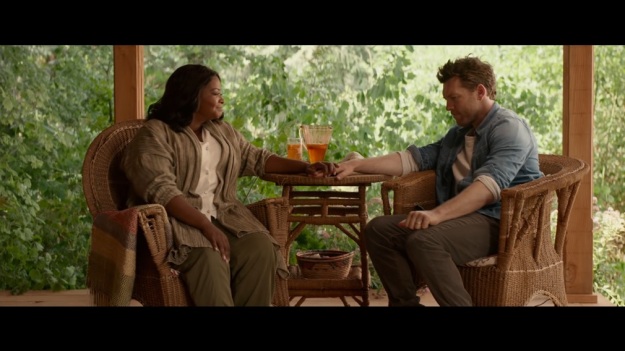