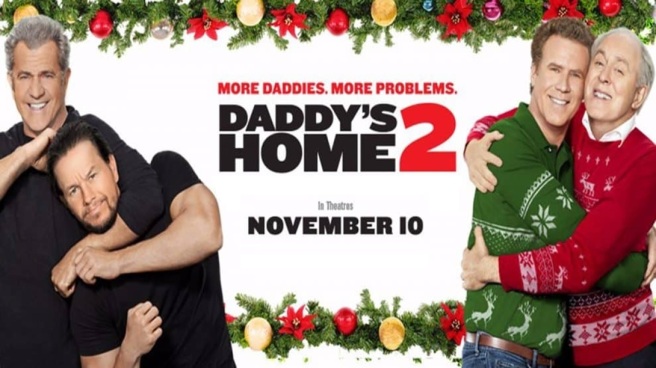 I don’t know about the rest of you, but the only thing I was wondering when I first heard about this movie was why they didn’t cast John Lithgow as the TOUGH dad.  Seriously, the dude’s got Cliffhanger, Ricochet, and even Dexter under his belt to show us all how despicably evil he can when the role calls for it, and it’d certainly be much better casting for Marky Mark’s mean deadbeat dad than the guy they got; though I’m pretty sure ANYONE in Hollywood who’s not currently being ostracized for inexcusable behavior would have been a much more palatable choice than Raging Mel.  I don’t know about this one.  I certainly didn’t expect much out of the first film and it managed to be a bit better than I was expecting, but what are the chances that we’ll get a half-way decent sequel out of that; especially as it’s a Holiday film which are almost always a bad idea for sequels.  Wait, didn’t I just say that like a week ago about A Bad Mom’s Christmas?  Now that I think about it… two unexpectedly solid comedies about parenting that made a HUGE amount of money at the box office get Holiday sequels about the parents of the characters in the first film… that are released within a week of each other.  Huh.  Well that’s… coincidental.  Anyway, does THIS Holiday sequel manage to AT LEAST be as good as the OTHER Holiday sequel we just got, or am I in for one HELL of a crappy movie going experience?  Well… Let’s find out…

The movie begins about a year after the events of the first film where Brad and Dusty (Will Ferrell and Mark Wahlberg) have put aside their differences and are the best co-dads of all time; sharing responsibilities with the kids and working together as a cohesive family unit!  Well… ALMOST perfect.  Dusty’s biological daughter Megan (Scarlett Estevez) reveals during the school’s Christmas Recital that she’s not happy about having the holidays split between two households, so the two families band together and decide to have just one Christmas together which seems like a great idea… until Dusty gets a call from his dad Kurt (Mel Gibson) who’s decided to come down for the holidays.  This is bad because Dusty’s dad is just like he was in the first film and will surely be nagging on him the entire time for not being MANLY enough whatever the hell toxic dinosaurs like him are always on about.  In addition to that, we’ve got Brad’s dad Don (John Lithgow) coming to town who is ACTUALLY a really nice grandpa but seems to be hiding something from Brad, an increasingly tense standoff between Brad’s wife Sara and Dusty’s wife Karen (Linda Cardellini and Alessandra Ambrosio) about how to raise the kids they share (Dusty’s biological kids and Karen’s daughter from another marriage), and to top it all off, Dusty’s biological son Dylan (Owen Vaccaro) is about at the age where he needs to have THE TALK which throws EVERYTHING into chaos as the four dads on hand have their own idea of how it should go and who should give it.  Will any of these plot threads come together into something resembling a cohesive whole?  Is there a single point in this movie where it’s NOT uncomfortable watching Mel Gibson on screen?  Can someone explain to me what I POSSIBLY could have done to deserve this!?