This isn’t the most object thing to say as a film critic, but there really are times where the success of a movie or the people behind it makes me hate the end product just a little bit more.  Adam Sandler’s entire career is based around this, and absolute dreck like Fist Fight and Daddy’s Home 2 are bad enough that their success only intensifies what I found lacking in them; especially with Daddy’s Home 2 which was so bad AND so successful that it pretty much poisoned the first film for me which I thought wasn’t THAT bad and somewhat enjoyable.  I bring this up because I get the feeling that many people feel that way about Melissa MicCarthy and her movies, and yet I’ve never had anything but praise for her as a performer.  Okay, I wasn’t a fan of Bridesmaids and I still haven’t seen Identity Thief or Tammy, but her track record has been pretty strong as far as I’m concerned and even her low end efforts like The Boss are still better than plenty other comedies that don’t seem to attract as much ire; not to mention the absolute shit storm that blew up over that AMAZING Ghostbusters movie!  Now she’s back to “ruin” yet another one of your treasured eighties films as this movie seems to be an update on Old School starring Rodney Dangerfield, and I hope the next film she does has her working on a golf course or traveling back in time to meet her parents in high school; just to see how far she can piss off “passionate” fanboys who can’t stand to see their original films (THAT AREN’T GOING ANYWHERE!!) being updated for a new audience!  Does this latest effort manage to do for college frat humor what the new Ghostbusters did for comedian driven adventure films, or is this a disappointingly low effort outing from one of the most talented comedians of our time?  Let’s find out!!

The movie begins with Deanna Miles (Melissa McCarthy) dropping off her daughter Maddie (Molly Gordon) for her final year of college which SHOULD be a celebratory day… but it all goes to hell when her jerk of a husband Dan (Matt Walsh) informs her on the ride home that he’s divorcing her, he’s already seeing someone, and he’s gonna sell the house.  Well that stinks!  What the heck is she gonna do to support herself now that her husband is gone and she hasn’t worked in years; not to mention that she never finished college which closes her off from most job opportunities!  Wait a minute… COLLEGE!  THAT’S IT!!  She’ll enroll in the same college as her daughter to finish up that final year and get her degree in… Archeology!  Because the market is bursting at the seams for someone with THOSE qualifications I guess!  Oh, that’s not important!  The important thing is that Maddie’s mom is gonna be at the same place as her and will be SUPER embarrassing!  Well actually, Maddie’s sisters as the Sorority (Gillian Jacobs, Adria Arjona, and Jessie Ennis) take to her rather quickly and she soon becomes the talk of campus; even getting invited to parties and hooking up with sexy stud Jack (Luke Benward)!  Oh, and I guess she’s got to attend her archeology classes taught by Chris Parnell, but forget that!  It’s time to put the MOM back in MOMentous College Experiences as she teaches the youngsters about being responsible adults and they in turn teach her how to cut loose!  Will Deanna manage to pass her final classes to get that degree, or will the pitfalls of college life distract her from reaching her dreams?  Will Maddie gain a newfound respect for her mother now that they’re spending so much time together, and what will the divorce do to her relationship with her as well as her dad?  Will Melissa McCarthy retain her title as one of the most bankable stars in the country, even when she’s doing a cheap college film!? 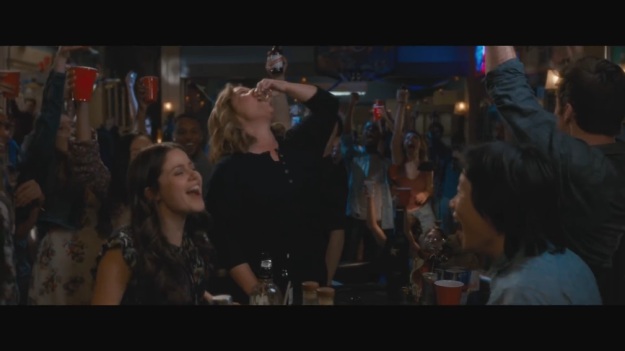 “Take a shot every time I cross a hundred million at the box office!!”