Boy does this movie want us to think it has a chip on its shoulder!  I haven’t seen negative review quotes used this liberally since Freddy Got Fingered, which… okay, that might actually be a good sign because I do like that movie purely on its utter absurdity (THIS IS A FANCY RESTAURANT!!), but is not the usual calling card of studio confident in a film on its own merits.  Then again I can’t imagine Universal having any other bright ideas after the thing got pulled from theaters and certain segments of the media decided that THIS was the thing that’s going to destroy the fabric of our society.  Personally, I think we already got that film with London Has Fallen, but whatever it is that hyped this movie up so much, is there any way that it can live up to those expectations?  Let’s find out!!

A bunch of people wake up in the middle of a field with no idea where they are or how they go there.  They start to slowly move towards the center of this big field with a giant crate right in the middle that contains a whole lot of weapons and a pig for some reasons; the implications of which they don’t have long to ponder because they are immediately beset by gunfire, booby traps, and all manner of lethal armaments!  Some of them seem to carry themselves well enough (Betty Gilpin) while others are showing themselves to be MASSIVE jerks (Ike Barinholtz) who may or may not have it coming for various reasons; the least of which being that they’re in a horror movie and that’s usually the way things go.  Eventually though, it’s revealed that their attackers are a bunch of liberal yuppie yahoos (including but not limited to Glenn Howerton and Hillary Swank) who seem to be taking their 2016 frustrations out on a bunch of red necks and scumbags through a game facilitated by their massive wealth.  Is this all just one big excuse for that whole class warfare thing I’ve been hearing about to become literal, or is there more going on than what we’re initially led to believe?  Is this like Saw where the main villain has justifiable reasons for taking these people prisoner, or is it like Saw 4 where things just get ridiculous and asinine for no good reason?  Seriously, is it POSSIBLE for Ike Barinholtz to not be a scumbag in everything he plays?  I’d give fifty-fifty odds on some rich fool actually BELIEVING this guy to be monster and throw him in one these death games for real! 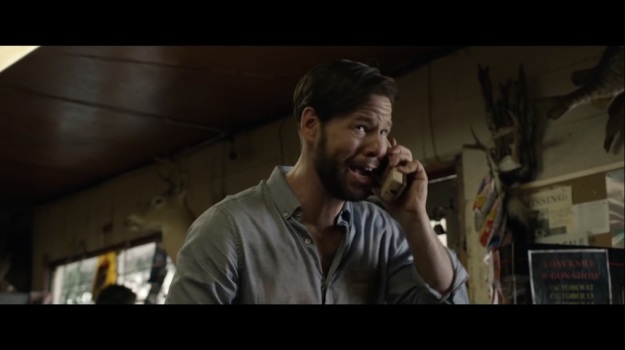 “When I signed up for a sequel to Blockers, I was NOT expecting this!  WHERE IS MY AGENT!?”