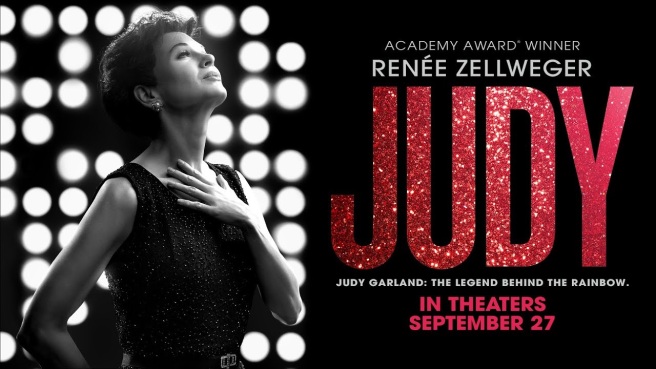 Yeah, I know I’m late on this one and on a LOT of things!  October was busy for me, alright!?  Well it’s time to get back on track and we’re starting with this movie I saw SEVERAL weeks ago and can hopefully give a worthwhile critique on; at least the parts that I can remember!  It probably doesn’t help either that I know absolutely nothing about the person in question as the only movie I’ve seen of hers is the one we’ve ALL seen, and I had no idea what her story was before and after that famous role.  Will this be the movie that’ll teach me everything I should have known and turn me into a Judy Stan, or will this biopic get lost in the shuffle; right next to those Tupac and Mötley Crüe biopics that you’ve already forgotten about?  Let’s find out!!

Judy Garland (Renée Zellweger) has had a rough go of it throughout the sixties with all her money drying up and her two young kids living out of hotel rooms and working nights with her mother on small stages for peanuts.  With no money, no house, and two kids who need stability and an education, she makes a very difficult decision to have them stay with her ex-husband while she goes to London for an extended stint at a nightclub where she’ll make a strong stable income as long as she can keep her demons in check.  Said demons by the way were born in flashbacks that we see throughout the movie as a young Judy (Darci Shaw) struggles in a terrifyingly oppressive Hollywood system that controls her every move and doesn’t bat an eye at giving her various drugs to keep her awake and focused.  Will Miss Garland be able to give the performances of a lifetime and finally secure a bit of stability for herself as well as her family back home?  Will her handlers in London be able to curb her more destructive behaviors, and are they doing it for her sake or just because the show must go on?  Is she gonna do that song about Rainbows?  Man, what was that one called…