FINALLY!!  I have been waiting so long for this movie to come out, especially with the last few weeks being miserable times doing these reviews.  None of this wish washy crap where I am not savvy enough to understand the BRILLIANCE of movies like Mandy, Assassination Nation, and A Star is Born!  None of the dull tedium of films like Night School or the disappointingly wasteful Hell Fest!  I’m done with those!  Give me something I can wrap my head around!  Something I can easily size up and bash with a baseball bat for some cheap laughs and maybe some a bit of insight!  Whether this is good or bad (STRONGLY leaning towards the latter if the trailers are any indication), I can’t imagine I’ll have to spend three hours hemming and hawing about the best way to describe why I’m the ONE critic out there who “doesn’t get it” because this is the kind of movie that I’m sure we’ll ALL have no problem understanding!  It’s a sad testament to the times we’re living in that a Sony Spider-Man movie (except maybe not?) is what I consider a grounding influence in my life, but I’m not the one who voted for any of these jerks, nor did I have anything to do with the September release schedule!  Anyway, does Venom actually turn out to be a fun adventure with one of Spider-Man’s most infamous foes, or did Sony WAY overestimate their ability to make another super hero movie after Disney held their hand on the last one?  Let’s find out!!

Eddie Brock (Tom Hardy) is your typical movie journalist!  He’s on the streets looking for the REAL news and has an axe to grind against THE MAN!  So much so that he finds dirt on some smug billionaire jerk named Carlton Drake (Riz Ahmed) who you’d THINK everyone would realize is bad just from the name, but Eddie’s got the story and springs these questions on him during an interview!  A few problems though.  First, this is the kind of billionaire who can get people fired from newspapers even if they DON’T run with the story, and second… well he got the dirt by hacking the computer of his girlfriend Anne Weying (Michelle Williams) who I THINK was a lawyer at the firm that Mr. Drake was employing, so she gets the boot too.  Well THAT certainly backfired for poor privacy invading Eddie!  Now no one will hire him because… I guess there’s NO outlet in existence that wants to hire someone who’s seemingly as competent as Eddie is (ESPECIALLY since he’s desperate and ready to work for cheap) and he’s just kind of sitting around depressed in his apartment; hoping his girlfriend will come back to him (she won’t) and hoping that his neighbor will turn down the loud music (he won’t).  Oh, and I think there’s something to do with aliens?  Yeah, apparently Mr. Drake had a spaceship that crashed but also had some alien lifeforms on it; namely The Symbiotes.  These giant piles of goo turn out to be rather dangerous as we learn when Mr. Drake starts siccing them on human subjects.  One of the scientists (Jenny Slate) doesn’t recall this being in her job description so she reaches out to Eddie who reluctantly goes to the facility with her after hours, and sure enough one of the Symbiotes escapes and attaches itself to Eddie.  Eventually it reveals itself to be known simply as Venom and the two of them need to work together; otherwise the EVIL MR. DRAKE will find them and… I guess do even MORE evil experiments on them!  Can Eddie and Venom uncover whatever it is that Drake has planned for humanity and the Symbiotes?  What exactly is Venom’s endgame here, and does it require Eddie to stay alive for that much longer?  What chances does Eddie have for reuniting with Anne now that there’s a third slimy wheel in the mix?  WHAT THE HELL IS TALKING ABOUT WHEN HE SAYS TURD IN THE WIND!? 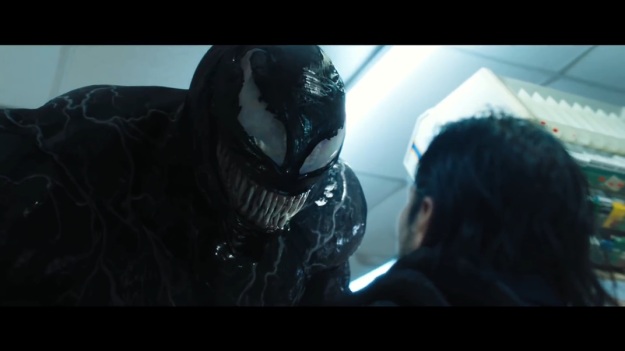 “Well on MY planet, turds are as light as a feather and could EASILY start rolling from a stiff breeze!  Now shut up as I eat your eyeballs!”