From the guys who brought us Dogboarding and the Turn Down for What music video, we now have the feature film debut of the duo simply known as DANIELS (Dan Kwan and Daniel Scheinert).  A lot of great filmmakers started out with shorts and music videos before becoming household names, just look at Spike Jones, David Fincher, and Michel Gondry.  True, that list also includes Michael Bay, but you can’t peg a winner EVERY time, and it’s not like he’s never made ANY good movies!  Can these green filmmakers prove themselves to be the next big thing with their movie about a farting Daniel Radcliffe corpse?  Let’s find out!!

The movie begins with Hank (Paul Dano) who’s been stuck on a very small island for some time and is ready to kill himself when something washes up on the shore.  It’s not Wilson from Castaway, but instead is a dead body (Daniel Radcliffe) who seems to have the uncanny ability to fart continuously and forcefully enough for Hank to ride his ass back to civilization!  Well sort of.  He hops aboard the Daniel Radcliffe express and washes up on a new shore, but there’s a forest between him and presumably other people, so he starts hiking his ass through the woods carrying the dead body with him in case he needs anything else from it.  At one point though, it’s clear that this is more than a magical farting corpse, but is instead a LIVING magical farting corpse who actually has all sorts of wacky powers that are discovered along the way.  Hank gives him the name Manny and they quickly become friends because… well there isn’t anyone else around, now is there?  Manny by the way has a whole lot of questions about what it’s like to be human and about life itself, so Hank has to keep answering these annoying and probing inquires while he uses the body to get whatever he needs to survive.  Is the body actually alive which would mean Hank isn’t as crazy as he thinks he is?  What is the story behind Manny in the first place and are there memories to be uncovered?  Were the filmmakers dared to see how many fart jokes they can put in a movie and STILL get it to be an indie darling? 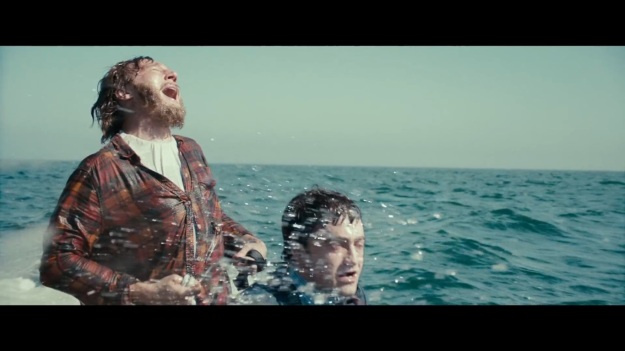 “Fart you magnificent bastard!  Fart us all the way to FREEDOM!!”