Well the day has finally arrived!  After a decade of production hell, Brian Henson has FINALLY completed his dream project and is ready to show it to the world!  I’m excited to say the least, especially after they released the trailer and I started looking into Henson Alternative which is the offshoot of the Henson Company that’s responsible for bringing this to life, and sure some of their productions have been less than stellar, but this premise is just too great of an idea to NOT want to see get made!  I rarely get this excited for a movie as I usually try not to get too hyped for stuff that I’ll end up reviewing (I’m also VERY good at living under a rock so a lot of movie do sneak up on me), but for this one I have very high hopes that we’ll get something unique if nothing else.  Does this manage to exceed my expectations and is one of the best action comedies this year, or was this yet another pet project that should have never seen the light of day?  Let’s find out!!

Phil Phillips (Bill Barretta) is a private eye working in Los Angeles who not only used to be a cop but was the very first puppet cop in the city.  However, after… THE INCIDENT… that ousted him from the force, he’s been making ends meet digging up other people’s dirty laundry.  May not be the most noble of professions, but it keeps a roof over his head, a steady paycheck for his assistant Bubbles (Maya Rudolph), and a well-stocked shelf of booze.  Content with his sad life, Phil never expected that his latest client Sandra White (Dorien Davies) to be the one that changes it all forever.  Well sort of.  While investigating a blackmail letter that Miss White received, Phil stumbles upon a bunch of dead puppets; one of whom was a cast member of a famous puppet TV show known as The Happytime Gang.  Things get even worse for Phil once his former partner Detective Connie Edwards (Melissa McCarthy) is put on the case, and Phil eventually finds his way towards investigating it himself when more Happytime Gang bodies start piling up; especially since his brother Larry (Victor Yerrid) was one of the cast members as well as Jenny (Elizabeth Banks), the woman he loved.  Can Phil and Connie put aside their differences regarding… THE INCIDENT… in order to solve this case and save the lives of the remaining Happytime Gang?  What could possibly be motivating such killings, and could it have something to do with Phil himself?  Can we get Best Achievement in Puppets category for the Oscars?  I feel like this should win SOMETHING, and if we’re making up new awards anyway!

END_OF_DOCUMENT_TOKEN_TO_BE_REPLACED

If you follow movie news rather closely (or did a google search after the trailer drop), you’d be aware that this is a project that has been in development hell for quite a few years; languishing at Lionsgate for many years before finally getting switched over to STX in 2015 which is who is finally getting this thing into theaters.  Apparently the story of a hardboiled detective who is ALSO a puppet wasn’t the easiest concept to produce even it sounds like THE GREATEST IDEA EVER, but now that this is ACTUALLY turning into a real film instead of a piece of strange Hollywood trivia, what do I think of what we’ve gotten in the first trailer?  I think it looks pretty good!  I’m a huge Melissa McCarthy fan, and while the joke is PRETTY obvious, there’s certainly potential for it to be really subversive of the cop genre and at the very least very interesting to watch.  I love the puppet designs here and in all honesty the incongruous nature of these goofy looking characters with a raunchy cop comedy isn’t nearly as enticing as seeing awesome puppets on the big screen again.  Sure, we had those two Muppet movies a few years back (this was in development well before those films by the way), but if it were up to me we’d be getting at least three puppet movies a year and in ALL sorts of genres for all sorts of audiences!  So the novelty will certainly be THERE and I’ll surely get a few chuckles out of it, but it needs to have more than just puppets acting crudely in order to be a GOOD film.  If that’s all they have up their sleeves, well Meet the Feebles, Crank Yankers, and TV Funhouse beat them to it.

END_OF_DOCUMENT_TOKEN_TO_BE_REPLACED 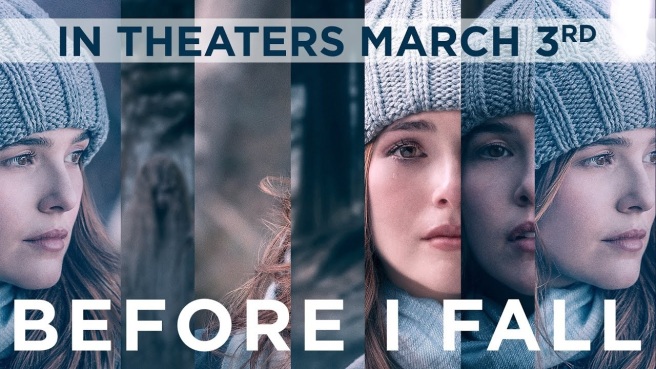 Oh look!  It’s that movie that looks like that one movie that came out two decades ago!  Okay, so maybe it’s not a TOTALLY original concept, but it at least looks more interesting than other YA novel adaptations like Divergent or The 5th Wave, and it does so without having to be set in the apocalypse!  The trailers seem to be leaning into the central conceit of the movie, and while it still has that YA aesthetics that look more drab and cheap than anything else, there seems like there’s some more effort thrown into this one than you’d typically expect.  Does this manage to rise above its peers and be one of the better examples of the genre, or are they just getting better at marketing these kinds of films to the general public?  Let’s find out!!

The movie begins with Samantha Kingston (Zoey Deutch) waking up on CUPID DAY which is NOT Valentine’s Day because these super hip and cool teenagers say so… even though it’s celebrated exactly the same way; down to the roses being handed out which I’m sure by any other name would still make this Valentine’s Day.  Anyway, she’s going through her day like it was any other; hanging out with her friends Lindsay, Ally, and Elody (Halston Sage, Cynthy Wu, and Medalion Rahimi), dodging the creepy kid who’s been pining after her for years (Logan Miller) and making out with her boyfriend (Kian Lawley) who’s honestly not much of a prize considering the dude wears his baseball cap backwards AT ALL TIMES.  Still, thing seem to be going fine in their lives and the four of them go to a party that night at the creepy kids place in celebration of Love Day or whatever the hell this is.  Hey, say what you will about his social skills; the dude has an awesome house!  The party however turns out to be less awesome because the creepy girl at school Juliet (Elena Kampouris) starts some beef with Samantha’s friend and is swiftly run out of the party by everyone there.  Feeling deflated, the four of them leave the party and WHAM!  They get in a car crash which… I THINK kills them?  Either way, Samantha wakes up the next day… EXCEPT IT’S NOT THE NEXT DAY!  She’s stuck in a time loop where she wakes up on the same morning each day and has no idea what it would take to break out of it; if that’s even an option.  Can Samantha find a way to escape the purgatory that she’s found herself in?  What can she learn by having to repeat the same day over and over again, and is this a wake-up call for her to become a better person?  I feel like I’ve seen this in a movie before.  Have they done this in a movie before?