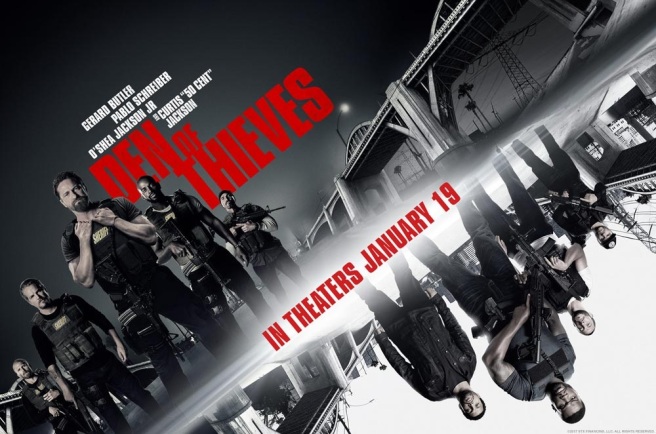 You know, after The Commuter turned out to be a giant pile of nonsense, I don’t know if I’m up to getting even more of it shoved directly into my face with yet another gritty Cops and Robbers story that looks about as good as a January dump job would.  Maybe I’m wrong though!  Maybe my expectations are so low after seeing Liam Neeson fight The Illuminati on a train that something much more grounded will be a welcomed change of pace!  I highly doubt it, but if last year taught us ANYTHING, it’s to not give up hope even if everything is telling you that THINGS ARE ONLY GONNA GET WORSE FROM HERE!!  Does this manage to be the cinematic oasis in the crappy wasteland known as January Releases, or is this sucker yet another mirage that crush our spirits and keep them crushed until around March?  Let’s find out!!

The movie begins with the theft of an armored car by a bunch of BAD ASS criminals led up by Ray Merrimen (Pablo Schreiber) whose crew of Merry men includes Levi (Curtis “50 Cent” Jackson), Bosco (Evan Jones), Mack (Cooper Andrews), and the new guy Donnie (O’Shea Jackson Jr) .  The crime is investigated by a crew of BAD ASS sheriffs led u by Nick Flanagan (Gerard Butler) whose posse of shitty lawmen includes… uh, okay I don’t think any of them other than Gus (Mo McRae) got a name, BUT THEY’RE BAD ASS!!  They’re so BAD ASS in fact that they break a WHOLE lot of civil liberties in the process of tracking down Ray’s crew and finding out what they’re up to.  It turns out that Ray wants to rob the Federal Reserve of all its discarded money that is set to be shredded, but with BIG NICK breathing down his neck, the plan becomes that much more dangerous; even if they’ve got an armored truck to work with.  Can this den of thieves pull off a scam that no one has ever been able to pull off, especially if they’re being watched the whole time?  Will Nick and his pals put their dicks back in their pants long enough to do some ACTUAL police work and arrest these guys at some point?  You know, come to think of it… why should I care about ANY of them!?  They’re all bad!  Wait… what if… the title of the movie… IS REFERRING TO BOTH GROUPS!?  MOVIE SHOCK!!