So it’s time to once again return the Pixar well, isn’t it?  After the underwhelming sequel to Finding Nemo which was then followed by the much more interesting and engaging Coco, you’d think that Pixar would have leaned into new properties they can exploit down the road rather than relying so heavily on sequelizing their back catalog, but this one is a little bit different than say Monsters University or yet another Toy Story movie.  People have been clamoring for a new Incredibles movie since the first one came out which is particularly exasperating considering it’s been well over a decade since then, but Brad Bird finally came back to the company that made him and is finally giving us the movie we’ve all been anxiously anticipating for all that time!  Was it actually worth the wait, or should Pixar left well enough alone?  Let’s find out!!

The movie picks up right after the events of the first film with the Parr family fighting the sinister UNDERMINER (John Ratzenberger) and in doing so reaffirming their strong familial bond!  Actually, they barely manage to stop anything and the city is pretty ticked off that they got involved in the first place; particularly since the dude was just robbing a bank and the money in there is insured anyway.  Heck, they could probably just trace the bills that were in there and arrest the UNDERMINER when he actually tries to spend it, unless of course he’ll convert it into bitcoins or something ridiculous like that.  Anyway, the Parr family is let out of custody, but are forced to lay low once again to avoid raising the ire of the authorities who are still enforcing a strict NO SUPER HERO policy despite seemingly unprepared for dudes with giant drill vehicles tearing up the city.  Things look particularly grim right now as Agent Dicker (Jonathan Banks) is retiring and can’t keep covering their butts on this, but a ray of hope comes through as Lucious Best AKA Frozone (Samuel L Jackson) arrives to give the parents Robert and Helen (Craig T Nelson and Holly Hunter) some news of an eccentric business man ready to offer them a deal.  The man’s name is Winston Deavor (Bob Odenkirk) and he wants to bring Super Heroes back into public favor, so with the help of his sister Evelyn (Catherine Keener), they plan on using one of them to solve a few low level crimes on camera so that people can actually see a Super Hero in action instead of just witnessing the aftermath of their fights.  The duo feels that Helen AKA Elastagirl is gonna be the best choice which incenses Robert AKA Mr. Incredible, but he capitulates and stays home to watch the kids Dash, Violet, and Jack-Jack (Huck Milner, Sarah Vowell, and Eli Fucile) until they can get Super Heroes legalized once again!  THEN he’ll be able to don the spandex once again and fight criminals instead of helping with math homework or reading bedtime stories!  It’s not as easy as it sounds though for either Robert OR Helen as the former has to deal with the evolving and terrifying powers of their youngest child Jack-Jack while the latter all of a sudden finds herself an arch nemesis called The Screenslaver (Bill Wise) that’s ready to stop her crime fighting ways before she even has a chance to really make a difference.  Will Robert manage to be a good dad while dealing with all these Mr. Mom shenanigans?  What can Helen do to stop this latest threat, and is there more to the story that she’ll need to uncover?  Wait, didn’t we already go through most of this the last time around!?

END_OF_DOCUMENT_TOKEN_TO_BE_REPLACED 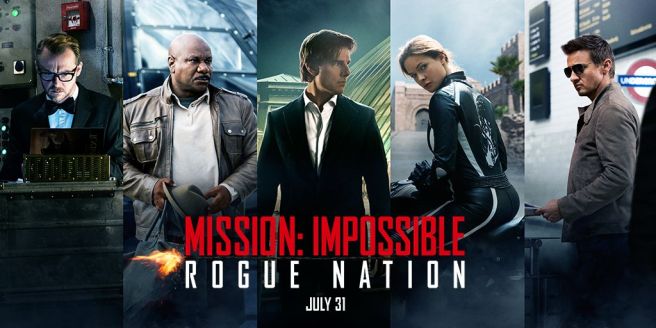 Mission: Impossible – Rogue Nation and all the images you see in this review are owned by Paramount Pictures

Trying to make a good Mission Impossible movie WITHOUT Brad Bird?  Sounds like a job for the IMF to me!  After the success of the fourth installment in the Mission Impossible series (Ghost Protocol), Tom Cruise and company are going to try their luck at making this into a noteworthy franchise once again.  This time around though, they don’t have Brad Bird on hand but they DO have the director of Jack Reacher which was a fun little Tom Cruise power fantasy so this new guy might just be a good fit for one of this series which is known for being a collection of Tom Cruise vanity projects.  While I have not seen the first three movies, I thought that Ghost Protocol was incredibly enjoyable and Tom Cruise has been on an upswing lately with movies like Jack Reacher and Edge of Tomorrow, so there’s a good chance that they’ll be able to recapture what made the last movie work despite the absence of its director.  Will they succeed once again in their mission to make something worthwhile out of this aging franchise, or will this blow up in their face (in five seconds)?  Let’s find out!!

The movie is about super spy Ethan Hunt played by Tom Cruise who HAS to be a real life Highlander considering how good he still looks in his fifties.