We’re back with another My Little Pony recap, and while I would normally start this off with a hilarious pun, I’m pretty sure the title is already a reference to a John Cusack movie so doing another play on words would be pretty redundant!  We’re two episodes down in another CMC cycle, neither of them being particular highlights of this season, leaving us with only this Apple Bloom episode before presumably moving on to something else!  Will this outshine the other two we’ve gotten so far and one of the CMC’s standout episodes, or will this end up just as ho-hum as everything else we’ve gotten from them this season?  Let’s find out!!

The episode begins with the CMC rummaging through some old costumes in the hopes of using them for future shenanigans and/or Cutie Mark Crusading jobs.  Supposedly these are from when they put on their concert all the way back in season one (The Show Stoppers), but I don’t remember them using any of these particular accessories.  Maybe these were the backup outfits just in case the audience wanted an encore. 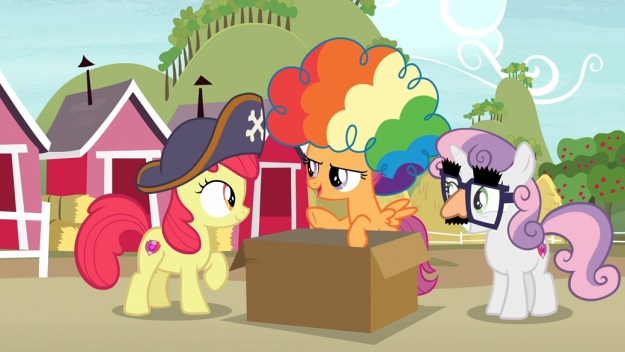