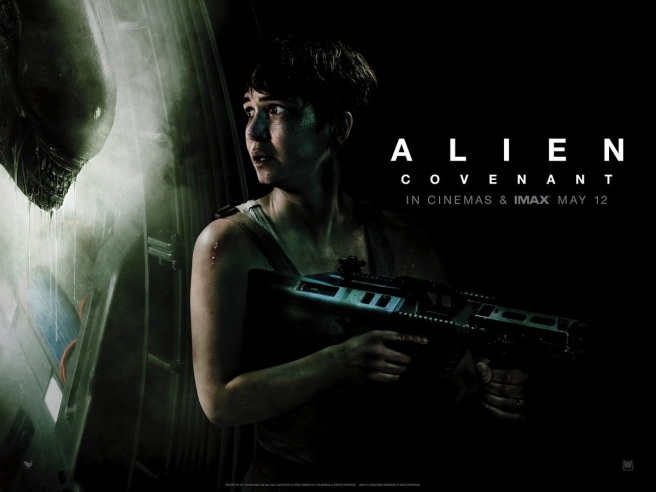 Alien: Covenant and all the images you see in this review are owned by 20th Century Fox

Before I get into the review proper, I feel it might be worth discussing my thoughts on the series as a whole in order to provide the proper context for everything else I’m about to say.  Ridley Scott’s original film from 1979 probably holds up the best; even more so than James Cameron’s Aliens from 1986 which is still a VERY fun action film and one of the few BIGGER IS BETTER sequels out there (matched only by his own Terminator 2 in 1991).  I give the edge to the original because it’s a straight up horror film and those tend to hold up better than shoot-em-action flicks (the quality of special effects changes rather quickly while what scares us transcends generations), but both are damn near the pinnacles of their respective genres.  Alien 3… not so much.  Oh sure, there’s PLENTY of aspects in it that are outright brilliant and awe inspiring (as well as bone chilling and utterly haunting), but they’re all wasted on a portentous and sluggish script that’s too impressed with its own sense of self-importance to pace itself properly, and yes I’m referring to the Assembly Cut which has most of the stuff that David Fincher wanted in it.  The one thing this movie DIDN’T need was to be over two freaking hours (also, killing the most interesting new character off halfway through didn’t help things either).  That said I would watch that movie TWICE if it meant I never had to watch Resurrection again.  Good GRIEF is that a monstrous product of its time!  I don’t think I’ve seen a franchise so thoroughly 90s-ified in the worst ways imaginable outside of that Roland Emmerich Godzilla movie!  Needless to say that the franchise needed a fresh start in order to get things back on track; and it wasn’t gonna be with those FREAKING Alien vs Predator movies!  I REALLY enjoyed Prometheus which seems to be a minority opinion for some reason, and I’m not sure why.  No matter how “scientifically minded” you are, there is always gonna be things you didn’t expect when traveling to ANOTHER FREAKING PLANET and people are gonna make mistakes!  Honestly, it seems less like a true critical consensus (film stands at a solid 72% on Rotten Tomatoes) than some inexplicable backlash due to it… not being completely scientifically accurate I guess?  What was your first clue?  Was it the giant humanoid albino dudes or the baby alien growing in that one person’s stomach?  Now I didn’t know ANYTHING about Alien: Covenant walking into it other than it was Ridley Scott directing and that it will indeed have Xenomorphs throughout, but considering how much I liked Prometheus I was hopeful that some of the cool stuff Ridley was working with in that movie would find its way into this seemingly straightforward Alien creature feature.  Does Ridley Scott succeed in his true return to the franchise he started all those years ago, or it time to end this bug hunt once and for all?  Let’s find out!!

The movie begins with the crew of the Covenant, a spaceship with thousands of cryogenically frozen humans and almost as many frozen embryos, being violently woken up due to some sort of science catastrophe.  Now normally the crew is left to sleep with the passengers, all of whom are headed to a new planet to colonize it, while their Synthetic buddy Walter (Michael Fassbender) takes care of everything, but with this… solar flare or something?  I don’t know, let’s just go with that.  With this solar flare causing havoc on the ship, all of them need to be woken up and at their posts to avert disaster.  Most of them are fine, but sadly enough the captain (James Franco in a very brief and crispy cameo) gets burned alive in the chaos; leaving the second in command Chris Oram (Billy Crudup) in charge.  So already things are going pear shaped on this trip that’s gonna take another seven years to complete, but they just so happen to pick up a strange signal that might be the answer to their problems.  The signal traces back to a rather close planet which they scan and find to be very hospitable to their needs, even more so than the planet they were heading to in the first place!  Despite the protestations of one the scientists Danny Branson (Katherine Waterston), Chris decides to at least investigate the place and see if they can locate the source of the strange signal as well as check if the planet really is as good as their scans indicate it to be.  Of course it’s not.  You KNOW it’s not.  This movie isn’t called Pleasant Space Cruise; it’s called ALIEN COVENANT!  The question isn’t IF they’re gonna get killed by monsters; it’s HOW MANY of them will!  Aside from the obvious revelations, does the crew of the Covenant find something unexpected on this seemingly perfect planet?  What was the source of that strange signal to begin with?  Maybe it’s someone from one of the other films who’s playing someone new in this movie!?

END_OF_DOCUMENT_TOKEN_TO_BE_REPLACED

What’s with movies trying to tell us that Space is totally scary!?  I LIKE space!  That’s where all the Star Trek stuff happens!  I mean, between Ridley Scott’s Alien, Gravity from a few years ago, and now THIS movie, it’s like Hollywood has a grudge against NASA or something!  This may be the most overt example though considering it’s literally called LIFE which is about the FIRST FORM OF LIFE WE’VE DISCOVERED OUTSIDE OF EARTH (from freaking MARS of all places) is apparently a serial killing jellyfish monster.  Anyway, does this latest entry into the horror sci-fi genre turn out to be another classic, or is this yet another uninspired snooze fest trying to grasp onto ideas that have already been done in much better movies?  Let’s find out!!

The movie begins IN SPAAAAAAACE on what I believe is supposed to be the International Space Station, but it could just be a unique space station for this movie.  The six member crew of this station (Jake Gyllenhaal, Rebecca Ferguson, Ryan Reynolds, Hiroyuki Sanada, Ariyon Bakare, and Olga Dihovichnaya) receive a package from a probe that was sent to Mars which has some dirt samples for them to analyze, and of course they find a single living cell tucked away inside; confirming once and for all that there is life outside of Earth.  Of course, the cell turns out to be PURE EVIL as it grows SUPER fast and eventually turns into some white squid/bat looking thingy which starts to wreak havoc on the crew members and on the integrity of the station itself.  Can our fearless astronauts stop this space menace from killing them all and destroying the station?  Failing that, can they keep the monster from making it back to Earth and presumably destroying all life on it!?  WHY DIDN’T THEY BRING SOME SPACE MARINES ABOARD IN CASE SOMETHING LIKE THIS HAPPENED!?  Master Chief could have solved this in minute!!