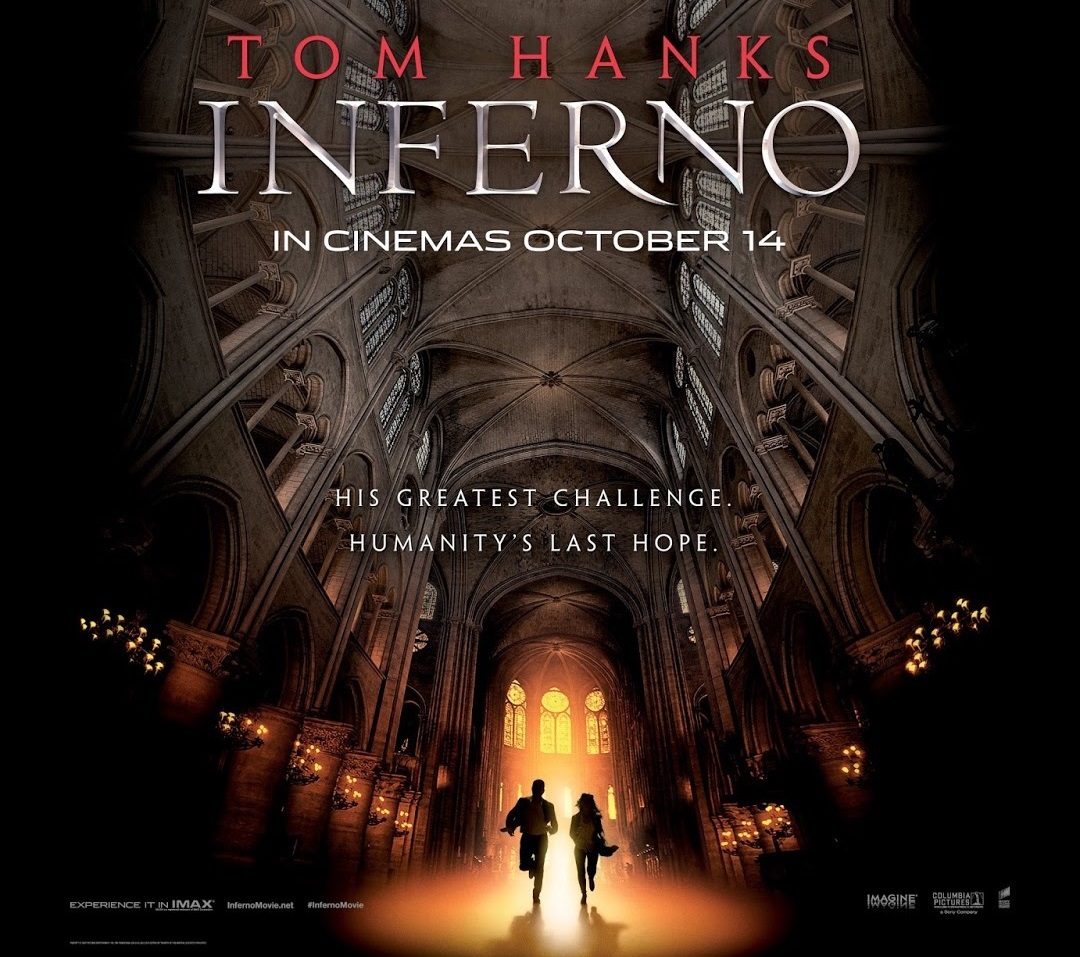 Oh hey!  I guess this is the reason Tom Hanks has been around so much recently!  His recent Saturday Night Live appearance was absolutely fantastic and honestly just what we needed during this very stressful time of the year.  Now I thought The Da Vinci Code was a decent enough film, and while I haven’t seen the sequel Angels and Demons, it’s mostly due to laziness rather than a real lack of desire to see the further adventures of Robert Langdon; especially considering that Ron Howard is still helming these things.  Can they manage to make decent thriller out of yet another Dan Brown novel, or has this series already grown stale? Let’s find out!!

The movie begins with good ol’ Robert Langdon (Tom Hanks) waking up in a hospital in Florence with a bleeding skull and no memory of how he ended up there or what the hell he’s doing in Italy in the first place.  He doesn’t have much time to figure out what happened though as within minutes of him waking up, he’s attacked by a rouge police officer and only manages to escape with the help of the on duty nurse Sienna Brooks (Felicity Jones).  It doesn’t take long after looking through his personal affects that he’s trying to solve some mystery left by Bertrand Zobrist (Ben Foster) who’s some asshole tech billionaire (oxymoron, I know) who’s SO concerned about overpopulation that he creates this super virus that will kill half the Earth’s population and will be release on the world in twenty four hours and FOR SOME REASON left a series of clues to find the damn thing so that Langdon can Sienna can stop him.  Of course, the reason why they have to follow the clues instead of getting Jack Bauer to beat the location out of him is because dumbass jumped off a tower and went splat after being chased by World Health Organization agent Christopher Bouchard (Omar Sy) who was trying to stop him.  Of course, the World Health Organization is ALSO after Langdon for some reason that probably has to do with that block of time that he cannot remember.  So not only does he have to run from renegade cops, but also from the WHO that I guess will only slow him down on his quest to find where the virus is and how it will be released upon mankind.  Can Robert solve this mystery despite recently suffering a head injury, and are the answers locked up in his slowly recovering mind?  Will the World Health Organization get its shit together long enough to be of some ACTUAL use in this situation rather than getting in Langdon’s way?  What is it with rich assholes thinking they can kill their way to a better world!?

I’m sure I won’t be breaking many hearts if I point out that a movie based on a Dan Brown novel is pretty dumb and needlessly complicated, in this case even more so than The Da Vinci Code or even Nation Treasure, but at least this film has enough talent and resources in front of and behind the camera to make it a compelling experience despite itself.  It’s far from perfect as the pacing is inconsistent with several stops and starts so that the film never really gets a good sense of momentum, and the plot twists throughout here are really hard to buy even for a story like this, but you’ve got great actors like Tom Hanks as the dad version of Sherlock Holmes and Irrfan Khan as a badass plot device who stabs people to carry this dumb story through to the finish line, and Ron Howard at least makes everything interesting to look at even if the words being said don’t make any sense.  This is what disposable summer fare SHOULD be instead of the Michael Bay and co boom-tastic fests that come and go with barely a passing thought from the masses.  This probably won’t stick around in the public’s mind much longer than those, but at least I wasn’t grumbling my way through it.  That’s something, right?

Now having only seen the Da Vinci code and not Angles and Demons, I only really have that to compare it to, and it that regard I was kind of disappointed with the central conceit of the movie.  In The Da Vinci Code (and even in National Treasure) the idea was less trying to stop some asshole from destroying the world; rather it was about uncovering a secret that has been kept for hundreds of years and that secret possibly falling into the wrong hands if our heroes aren’t able to figure it out.  The fact that the ENTIRETY of the mystery is something the villain thought up in the last few years rather than some ancient puzzle (the connection to Dante and his Inferno is merely symbolic) makes this whole conflict feel rather small despite its world changing implications, and throws in a lot of logical issues that wouldn’t be there if these clues were left by people hundreds of years ago.  I mean seriously, did this mother fucker not have a safety deposit box or an iPhone that he can lock?  There’s nothing about what he’s doing that would require his backup plan to be so convoluted and require a bunch of globe-trotting other than they HAVE to do that for this to be a Robert Langdon story and why they don’t just get Lisbeth Salander on the case.

That’s the one big example of this movie making no damn sense, but stuff like that is throughout the entire movie.  I love that in order to keep the suspense going, that the nominal good guys have to carry guns and knock down doors for the first act so that we don’t clue in on who are good and who are bad too early.  Look, I’m no expert on how the World Health Organization operates, but I get the feeling that they don’t have tactical response teams ready to go into sovereign countries on a moment’s notice; waving guns, pushing people around, and closing down streets.  I’m sure the Prime Minister of Italy is thrilled about that.  That though is just a question of logistics as I do understand what they’re after and how they ended up in the position they’re in.  Okay, the guns STILL bug me, but I can overlook that.  What’s not so easy to wrap my head around is Irrfan Khan’s role in this as some sort of pirate security firm (no really, his operation is based out of a fucking boat) and he seems to make decisions on the fly without any real understanding of what the hell is going on; something we’re obviously not supposed to be thinking about him considering how much prestige and authority his character and his organization is given.  Even though he does a great job in his role and has one of the best moments in the entire movie towards the end, he exists as nothing more than a plot device to sort of explain how some of this stuff might have happened.  I don’t really buy it, but I do like seeming him stab dudes!

Now I will cop to the fact that the big plot twist towards the end of the second act did come as a surprise to me and I thought it was a pretty good direction to take this.  Unfortunately like every other plot point in this, it’s under cooked and only makes things that much more confusing.  Hell, I’m not even sure that what happened throughout the first two thirds of the movie was even part of the bad guy’s ultimate plan and only shows even more how convoluted and poorly thought out their huge scheme to “save humanity” really was.  For someone SO SURE that humanity is too stupid to save itself, he didn’t seem to be half as smart as he thought he was.  Then again, that tends to be the case with people who think they’re the smartest person in the room.

These flaws in the story and how the film moves through it don’t ruin the movie however as it is still really enjoyable for most of its run time.  Sure, I don’t exactly buy that Robert Langdon knows ALL the secret passages in all these museums yet the curator’s don’t inform the WHO about them, but I like watching him go through secret tunnels and avoiding the authorities using his brain rather than through brawn or ninja skills.  Even if the mystery itself is pretty uninspired and completely unnecessary (if the bad guy did NOTHING instead of leaving these breadcrumbs, he would have gotten away with it), the third act is fantastic and even reminds me a bit of Hitchcock; specifically The Man Who Knew Too Much.  I won’t give too much away but the ending here feels like an homage to what happened in that film as people are desperately trying to do what they have to in order to end this nightmare while also doing so in a classy venue full of socialites and a live orchestra (which naturally provides the background music for the scene).  It’s a series of well-done ticking clocks that ratchet up the tension a little bit at a time before providing some relief and then ratcheting it up even higher!  Even in here there are some questionable moments (how exactly is old ass Robert Langdon doing any of this at the end?) but they honestly don’t even distract a little bit from what’s going on which is an improvement on the rest of the film where the logic flaws are much more noticeable.

This is certainly an enjoyable film and it’s worth seeing a lot more than some of the crap we got this year, but it’s hardly memorable in either the filmmaker’s or the stars’ respective careers.  The thing is that when Tom Hanks is slumming it, it’s better than when say Kevin Spacey is in a talking cat movie or Jennifer Garner is ALSO in a talking cat movie along with a mediocre religious film.  I’m not so sure about seeing this in a theater as it’s pretty low key as far as thrillers go, but maybe that’s what you’re looking for.  Now if only we can get Ron Howard to make a David S Pumpkins movie…