‘Tis the season for the bold and foolhardy to try and make films that will enter into the catalog of class Christmas movies!  Probably the last one to make the leap to big leagues in regard to enduring Christmas Classics is Love Actually from 2003, but that hasn’t stopped film makers from trying to break into that market which brings us to today’s feature.  Will this movie face this challenge head on and make it through the neigh impossible glass ceiling of beloved Christmas films, or will this be yet another failed attempt to recreate that Christmas magic and will be doomed to the same fate as Four Christmases, Deck the Halls, or god forbid Christmas with the Cranks?  Let’s find out!!

The movie follows the misadventures of several members of the Cooper family on Christmas Eve as everyone is trying to get ready for the family dinner that is to take place later that night.  At the head of the family is Sam and Charlotte Cooper (John Goodman and Diane Keaton) who are trying to keep it together long enough for them to have a happy holiday with the family despite the fact that they plan to get divorced soon after the season ends.  We also have Charlotte’s sister Emma (Marisa Tomei) who’s just a bitter jerk during the holidays (think Marie Schrader from Breaking Bad) and gets caught shoplifting which means she has to get out of it while being driven to the police station by a cop played by Anthony Mackie.  Charlotte and Sam’s kids  are Hank and Eleanor (Ed Helms and Olivia Wilde) who have their own problems to deal with as the former just recently got divorced and then fired from his job while the later… just doesn’t like coming home for the holidays and is procrastinating in an airport with a solider she just met (Jake Lacy).  There are other members of the family such as, Bucky Cooper (Alan Arkin) who’s hanging around the fringe of everyone’s story but also has his own thing going on with a waitress in a diner played by Amanda Seyfried, and Aunt Fishy (June Squibb) who’s basically playing a female version of Grandpa Simpson.  With all these characters dealing with their problems during the most stressful time of the year, will they somehow manage to have a happy Christmas, or will this end in total disaster?  Can this movie manage to juggle all these subplots without feeling like a poorly paced mess?  Okay, seriously.  Can’t we just watch Love Actually instead?

“We’re gonna get through this. Just grin and bear it for a little bit longer.”

END_OF_DOCUMENT_TOKEN_TO_BE_REPLACED

I’m pretty sure I saw a trailer for this before every single movie in the last four or five months.  Now that we finally get a chance to see this political dramedy about campaign management, does it actually turn out to be any good?  Well this is basically a hodgepodge of people we like but who don’t always make the best career choices, such as Sandra Bullock, Billy Bob Thornton, David Gordon Green as the director, and even George Clooney who’s producing this and will sometimes have a misstep.  Will this be another great film from people we know can make great movies, or is this gonna be one big disaster that we only sometimes expect from them?  Let’s find out!!

The movie follows Sandra Bullock as Jane (colloquially known as Calamity Jane) who was at one time the best campaign manager in the United States.  She won many elections in her career but along the way she developed a drug habit and became an alcoholic to the point that she started to become a laughing stock in her field and eventually checked into the Betty Ford clinic.  The movie picks up several years later and she’s spent the intervening time alone in the woods in exile or something until two campaign managers Ben and Nell (Anthony Mackie and Ann Dowd) who are working on a campaign in Bolivia and are so far behind that they’re desperate enough to try and call Jane out of retirement.  When she finds out that their opponent is being managed by her rival Pat Candy (Billy Bob Thornton) she agrees to go there and help out, but is quickly unimpressed by what she finds.  A candidate who seems checked out and disinterested, a staff composed of idiots who can’t even speak Spanish, and polls that put the guy over twenty points behind their opposition.  Can Jane get back into the swing of things and whip this campaign into shape, or will she end up losing herself again throughout this whole ordeal!? 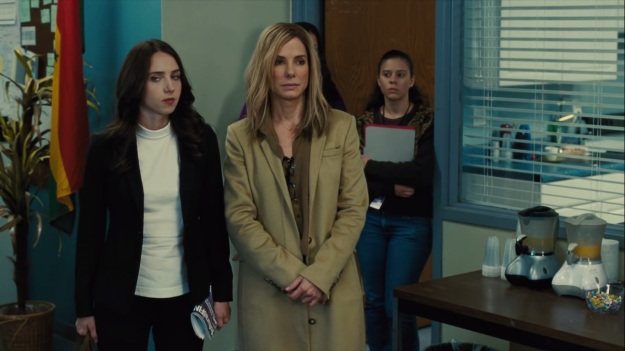